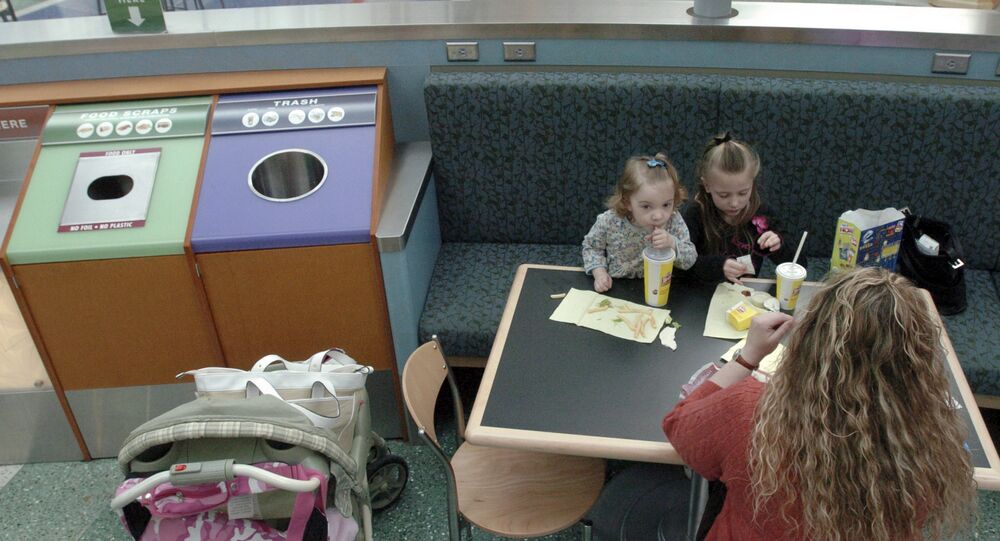 No Mess in Texas: All Food Waste in Austin Now Must Be Donated, Composted

The city of Austin, Texas, began a new initiative Monday to dramatically curb the careless discarding of organic waste. It’s part of a growing trend in US cities to find alternatives to putting organics into landfills, where they can form greenhouse gases like methane as they decompose.

A 2015 community diversion study found that 37 percent of the waste sent by Texas' capital city to landfills by businesses was organic material that could have been donated or composted. Austin has already committed itself to a Zero Waste Goal by 2040, so a provision of the city's Universal Recycling Ordinance that went into effect Monday will go a long way towards achieving that goal, according to a press release by Austin Resource Recovery.

© Photo : Too Good To Go
To Go or to Trash? UK Gathers Pace in Fight Against Food Waste

The ordinance requires that employees be given "convenient access to methods of keeping food scraps and other organic material out of landfills" and that bilingual English-Spanish information and education be provided, according to a fact sheet viewed by Sputnik.

The fact sheet names four methods of organics diversion: feeding hungry people (the preferred option) by donating extra food to food banks, soup kitchens or shelters; sending it to be used for animal feed for regional or community ranches; composting on-site or with a private service provider; and an open-ended "alternative means" call, encouraging the development of "innovative solutions, customized to your business, which diverts organic material from landfills."

A video viewed by Sputnik explaining the details of the ordinance notes that "organic waste" can include everything from leftover or unused food to landscaping clippings and greasy pizza boxes. All food-permitted businesses are required to come up with a plan to deal with such waste.

Susanne Harm, public information specialist senior at Austin Resource Recovery, told Sputnik Wednesday that the city "came up with zero waste by 2040 because we know we can do it — we found so many recyclables and organic waste in the landfill, textiles — we knew we could do it if we could affect change to the business. So we created a policy that was designed and written in 2011 and 2012, employing a lot of feedback from stakeholders — it wasn't like we just said 'Hey, we're going to do this.' We talked to everyone that would be affected."

Harm explained that the ordinance is proceeding step by step, starting with the biggest businesses — giant commercial kitchens, apartment complexes — then big restaurants and now small food-permitted businesses, of which the city has over 5,000.

"Before these ordinances were written and enacted, we met with a lot of stakeholders at all of these organizations, whether it was the donation receivers or the donation givers or the people in between, the haulers… we met with everyone," Harm said. She also noted that the US federal "Good Samaritan" law goes a long way to protect food donors from liability.

Harm noted that organic waste is an important challenge for Austin's landfills because it makes up over one-third of the material within them. Because landfills are covered as they fill up, organic material decomposes anaerobically, producing huge amounts of methane, a potent greenhouse gas with "more than 25 times greater" potency than carbon dioxide, according to the US Environmental Protection Agency. The agency also notes that "landfills are the third largest source of [methane] emissions in the United States."

"So there's so many benefits to keeping organics out of landfills…. We can extend [our landfill's] life, we want to keep it from filling up immediately. That's a big part of it, because landfills are not a hole in the ground," she said. They're high-tech installations that can cost tens of millions to build. "We told people, 'We don't want you to have to pay for that, so let's make [our landfill] last as long as we can.' And how you can do that is by keeping 90 percent of the stuff that's in there right now," Harm told Sputnik.

Harm said the city is relying mostly on self-reporting and monitoring, and Austin Resource Recovery has made itself available for consultations with businesses that need advice on how to set up an organic waste diversion plan.

"We're very much about education," Harm said, "we're not the recycling police."

Austin joins a number of other US cities and states taking measures to combat food waste and reduce the load borne by landfills.

San Francisco set a goal in 2002 of diverting three-quarters of its waste by 2010 and achieving zero waste by 2020, according to an EPA report on the city's efforts. The city also passed a mandatory recycling and composting ordinance in 2009 that added compostable materials as a third category of waste sorting, providing curbside collection along with commingled recyclables and regular trash. Like Austin, the Golden Gate city considers "compostable materials, including all food scraps, food-soiled paper and yard trimmings" to be compostable organic waste. By 2012, the city had already achieved 80 percent diversion, the EPA notes.

The state of California at large began requiring businesses to recycle organic waste in April 2016, if they produce over 8 cubic yards of waste per week (that's roughly the volume of a standard dumpster).

In July of that year, New York City began requiring food service establishments in large hotels, vendors in arenas and stadiums, food manufacturers and wholesalers of a certain size to comply with its Commercial Organics Law and separate their organic waste for pickup, lest they face cumulative fines.

Massachusetts instituted a solid waste disposal ban in October 2014, which applies to businesses and institutions that produce more than 1 ton of food waste per week — an estimated 1,700 of its 7,000 food businesses, Spoiler Alert noted.