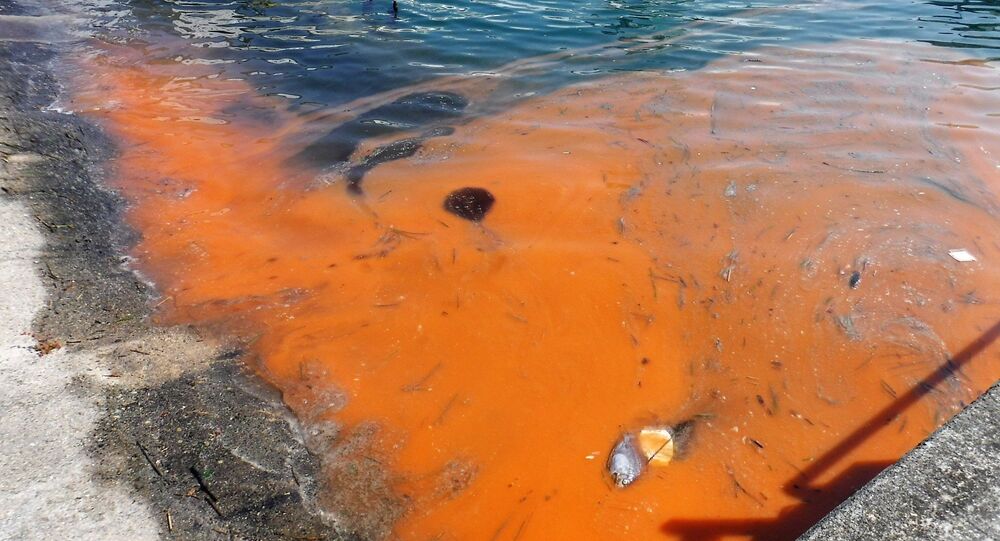 Southern Florida has been plagued all summer by one of the worst “red tide” events ever recorded, which activists and scientists have blamed on governor Rick Scott ‒ recently showing their displeasure by booing him out of a restaurant in the state.

An environmentalist told Sputnik Wednesday the algae bloom is linked to runoff caused by deregulation combined with drastic population growth.

Since 2011, Scott, a Republican, has been Florida's governor. Now he's seeking a senator's office in Washington, DC, in the 2018 elections, since he is limited to two gubernatorial terms. During his tenure, Florida's population has surged by 11.6 percent, Forbes reported in June, making it the third-most populous state in the union — only Texas and California rank ahead of it.

However, Scott's administration has also presided over the repealing of key legislation regulating runoff from septic tanks, lawns and farms — runoff that scientists say is exacerbating a phenomenon called "red tide," which kills huge amounts of marine life and is dangerous to humans as well.

Scott's senatorial campaign got booed out of a restaurant in Venice, Florida, Monday, by protesters who dubbed him "Red Tide Rick." A campaign stop at Mojo's Real Cuban Restaurant lasted a mere 10 minutes.

​Inside the restaurant, Scott's supporters chanted "Rick Scott" and held signs supporting his campaign, but as they accompanied him outside to his vehicle, they found hundreds of angry protesters with home-made signs, chanting, "Hey hey, ho ho, Red Tide Rick has got to go!"

This, critics argue, has exacerbated the deadly algae blooms along the coast that turn the water the color of tea and kill thousands of fish and other marine life. Skin contact can be harmful for humans as well, and the acrid smell drives tourists away.

"Once you wipe out the economy and the tourism, Florida's dead," John Citara, a Sarasota, Florida, resident who came to protest Scott, told The Hill Monday. "If this doesn't show us we need to do things differently and hold people accountable, what will?"

The National Oceanographic and Atmospheric Administration (NOAA) explains on its website that "red tide" is "an unusually persistent harmful algal bloom" of the Karenia brevis which "produces potent neurotoxins, called brevetoxins, that can affect the central nervous systems of many animals, causing them to die." The toxin can accumulate in molluscs that filter the water or eat the algae, too, which can then affect birds and other mammals, including humans, that eat them. In addition, wind and waves can vaporize the toxins, causing respiratory problems for people downwind of the blooms and producing a foul smell.

The blooms are natural and have been recorded for hundreds of years. However, the agency notes that 2018's bloom is unique in three distinct ways: it's come much earlier than normal; it's lasted much longer than normal; and it covers a greater area than normal, presently stretching over more than 50 miles of Florida's Gulf Coast.

"The duration of a bloom in nearshore Florida waters depends on physical and biological conditions that influence its growth and persistence, including sunlight, nutrients and salinity, as well as the speed and direction of wind and water currents," the agency says.

Scott has declared a state of emergency in seven counties and set aside $9 million in grants to help communities deal with the red tide crisis, The Hill noted Tuesday.

Environmental activist Rob Moher, president of the Conservancy of Southwest Florida, spoke with Sputnik Wednesday about the causes and the solutions to the red tide and why activists are so angry with the trend set by Scott's administration.

"You can't oversimplify it as "you caused red tide," he told Sputnik, "but certainly the severity of the red tide this year is certainly notable — we have record mortality for sea turtles, for example; I think it's 4.5 times higher than any other time in recent history that they've been keeping data. And so there is some pretty strong scientific evidence suggesting the interaction of land-based nutrients [exacerbates red tides] — and so then the question becomes, ‘OK, how is the state of Florida doing in regulating land-based nutrients?' And the answer to that is: ‘We're not doing nearly as well as we should be.'"

Noting that population growth in the last decade has amounted to "adding 1,000 people a day to Florida," Moher said that the increase in home building in a deregulatory environment with slashed budgets for monitoring, compliance and enforcement as well as water management, creates "almost a perfect storm" for environmental problems like red tide.

"It's the wrong time to have cut back so dramatically on some of these critical efforts to monitor water quality and to enforce compliance against polluters. And that's certainly a contributing factor toward the crisis. We see it with the blue green algae of course in the Caloosahatchee [River] — which is a man-made problem — here; this is different from the red tide, which is naturally occurring," Moher said.

"[I]t happened in 2016, it happened in 2006, and it happened again this year, and it'll keep happening until we fix all the pieces of the puzzle. I think of it as a puzzle, and what I mean by that is that one big piece of the puzzle is Everglades restoration." He noted that while the state government has supported projects such as elevating the Tamiami Trail highway to allow natural drainage of the Everglades, it's "only one piece."

"The pieces that we at the Conservancy feel have been lacking have been things such as monitoring and compliance. We know that enforcements, for example, against polluters in the state have dropped dramatically in the last 10 years. We know, for example, that the water management district budgets were cut by I think $700 million. So a lot of good scientists were let go, and that has an impact."

The other important piece, Moher said, is the Florida government taking over wetland permitting from the federal government as it removes "the regulatory regime for trying to protect those wetlands."

Some of the important sources of runoff include lawns (Moher lamented "our addiction to green lawns") and under-regulated golf courses. Without strong fertilizer regulations, lawn and golf course treatments can simply wash off in the rain, running toward the sea and driving algae growth. Moher noted that industrial sources such as cattle ranching and "agricultural inputs" put lots of nitrogen and phosphates into the water, as do leaking septic tanks.

"One thing that we weren't happy with" is the Scott administration's decision not to strengthen septic tank inspection policies, Moher said. "I think less than 1 percent of septic tanks are being inspected now. Well, leaking septic tanks are a big deal, both in the St. Lucie [port] and here — they contribute to a lot of these nutrient issues. You can imagine what's in a septic tank — it's got big nutrient growth."

Moher said that to reverse this trend, the Florida government should fully fund Amendment One, also called the Florida Water and Land Conservation Initiative, a ballot initiative passed in 2014 with flying colors, approved by 76 percent of Floridians. The measure was intended to facilitate the use of real estate taxes to "acquire and restore Florida conservation and recreation lands" for things like panther habitats, tropical hammocks and the Everglades restoration, the Palm Beach Post reported.

"This should all be transparent to the public and to policy makers," Moher said, noting that while the problems and solutions are not the same everywhere in Florida, "nutrients are at the heart of our issue, so we have to tackle nutrients through a bunch of the strategies we talked about, and we have to manage growth better, and we have to protect the core ecological infrastructure that gives us a lot of great pollution control and flood control, and we have to stop permitting its destruction."