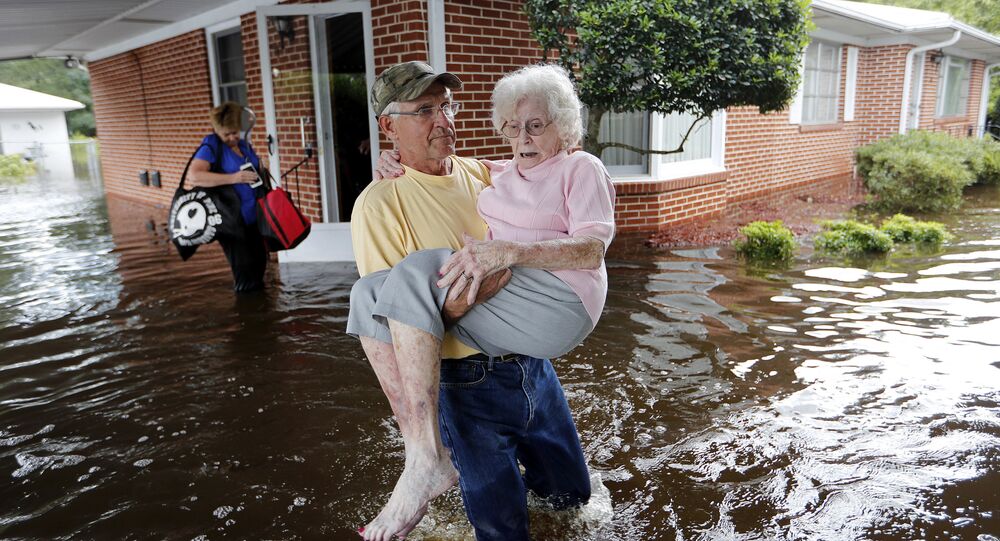 Florence, which made landfall Thursday as a Category 1 hurricane, is predicted to keep dumping rain on parts of the US East Coast over the next few days, with numerous rivers in the region expected to crest at major flood stage.

More than 40 million people are under a flash flood watch or warning, from Charleston, South Carolina, up through New England, according to the US National Weather Service. Florence was downgraded to a tropical depression Sunday, but its rain remains a deadly threat.

At least 20 people in the Carolinas were killed in storm-related incidents, including an elderly man whose body was found next to his submerged sedan Monday morning in North Carolina's Union County, according to Union County Sheriff Department spokesperson Tony Underwood.

​The day before, rescue workers near Charlotte, North Carolina, recovered the body of a one-year-old boy who lost his mother's grip when their car was swept off the road by floodwaters.

According to reports, Wilmington, North Carolina, a city of about 119,000 residents, has been completely cut off from the rest of North Carolina, with most of its roads submerged by water. The city has already received more than 23 inches of rain from Florence.

Emergency workers are currently delivering food and water to Wilmington while rescue workers use helicopters and boats to pull residents inland from homes flooded by rivers. Duke Energy's Brunswick nuclear plant, which is about 30 miles south of Wilmington, is also cut off by flood waters.

According to Nuclear Regulatory Commission spokesperson Joey Ledford, the storm's effect on the 1,200-acre complex has been declared an "unusual event," which is the lowest threat of nuclear emergency, and the nuclear plant appears stable. No flood water has yet entered the facility, the News & Observer reported Monday.

"Not only are you going to see more impact across North Carolina… but we're also anticipating you are about to see a lot of damage going through West Virginia, all the way up to Ohio as the system exits out," Brock Long of the Federal Emergency Management Agency (FEMA) said Sunday, the Huffington Post reported.

​The National Weather Service reported Monday that the North Carolina city of Elizabethtown has gotten the worst of Florence's rain, accumulating 35.93 inches since Thursday.

More than 500,000 people in the US remain without power three days after Florence made landfall in North Carolina. Most of the outages are concentrated in that state, where more 470,000 customers still can't get electricity.

​"Damage is so widespread that it could take this army of restoration personnel several more days or even weeks to fully restore power," spokesperson Kristie Aldridge of North Carolina Electric Cooperatives said Monday, USA Today reported.

​In South Carolina, another 16,000 have no electricity, while in the state of Virginia, 14,000 are without power, according to the PowerOutage portal, which tracks power outages across the United States.