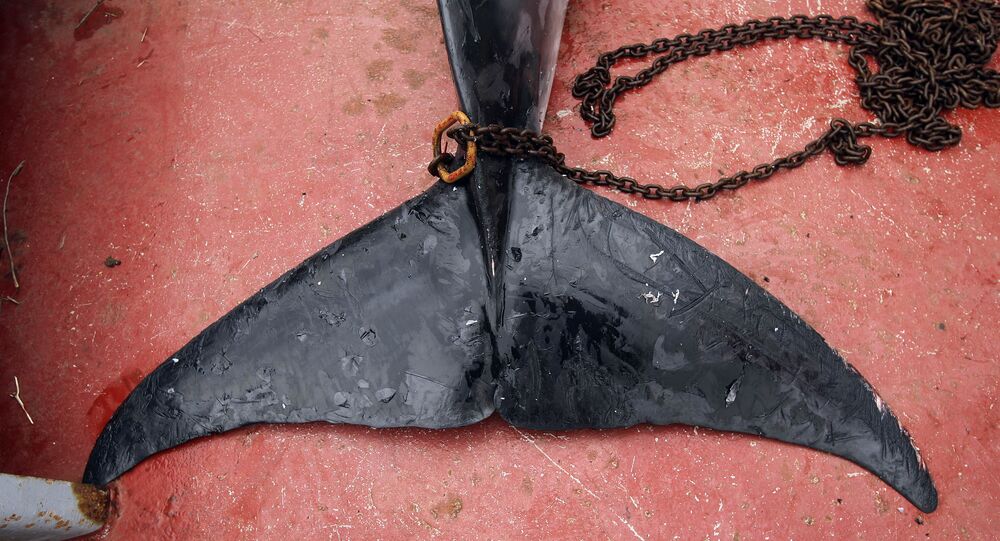 Out of the 333 minke whales killed in 2017 as part of Japan's so-called scientific whaling program, 122 were pregnant while another 114 were juveniles, according to documents recently released by the International Whaling Commission (IWC).

Just 11 whales managed to get away from researchers by hiding in water with high-density ice, the report stated. Conducted by Japan's whale research program, NEWREP-A, the annual 83-day whale hunt takes place in the Southern Ocean.

As Sputnik previously reported, though commercial whaling has been banned by the IWC since 1986, Japan has been able to use a scientific research loophole as a means to continue killing the large cetaceans. Critics of Japan's "research" program say meat from the culled whales ends up for sale, and that the country's insistence on killing the animals also stems from resistance to bending to non-Japanese cultural ideas about what kinds of animals can be eaten or killed and which should be exempt.

"The killing of 122 pregnant whales is a shocking statistic and sad indictment on the cruelty of Japan's whale hunt," Alexia Wellbelove, senior program manager at Humane Society International, told the Independent. "It is further demonstration, if needed, of the truly gruesome and unnecessary nature of whaling operations, especially when non-lethal surveys have been shown to be sufficient for scientific needs."

According to the IWC report, the two Japanese ships used harpoons loaded with a 30-gram penthrite grenade to target the whales and conduct what it called "biological sampling" to investigate "the structure and dynamics of the Antarctic marine ecosystem." Once onboard, whales were measured and had their insides poked and prodded in order to collect data on their blubber and stomach contents.

The report goes on to add that stomach contents were needed in order "to estimate prey composition and consumption by Antarctic minke whales." The animals' blubber thickness, fat weight and girth, according to the report, were needed to "study the nutritional condition of the whales."

In accordance with IWC regulations, Japanese officials later shared the findings with the commission.

Speaking to the Sydney Morning Herald, Wellbelove stressed that Australia, along with other countries against whaling, should send the "the strongest possible message to Japan that it should stop its lethal whaling programs."

According to website The Conversation, NEWREP-A, also known as New Scientific Whale Research Program in the Antarctic Ocean, was established in November 2014 in an effort to replace its previous whaling program, JARPA II. In March 2014, Japan's previous program was deemed "not for the purposes of scientific research" by the International Court of Justice, which made it illegal under the IWC's whaling regulations.