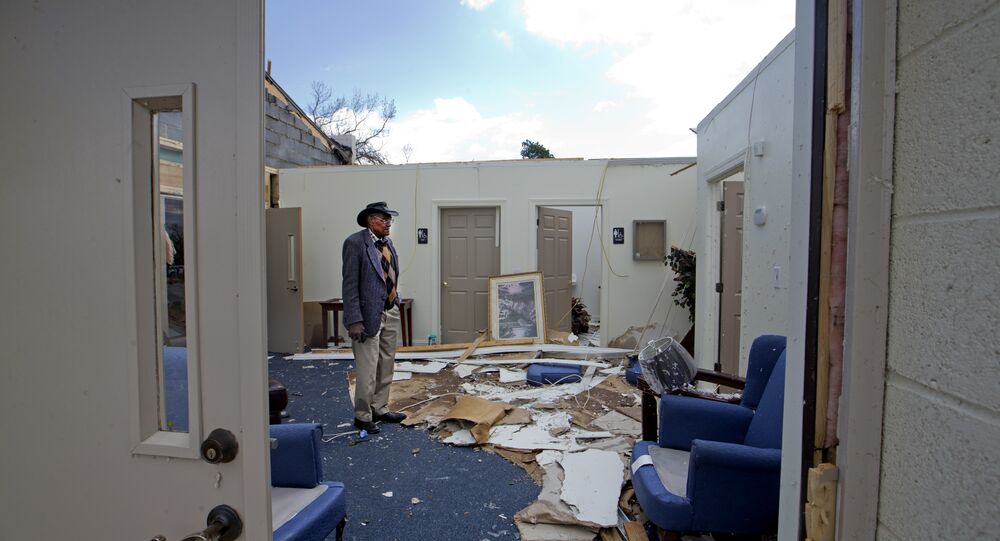 Severe tornadoes in the US South and blizzards in the Plains and Midwest through the weekend continue to bring snow, rain and wind to large parts of the country, shutting down airports and knocking out powers for tens to thousands of people.

According to the National Weather Service (NWS), a tornado with winds of 135 miles per hour and a path at least 300 yards wide hit Greensboro, North Carolina, on Monday. Neighborhoods near Hampton Elementary School on the eastern side of Greensboro were most affected.

On Monday, a WFMY crew was getting ready to broadcast before the tornado knocked out power and communications at the station itself.

​"We were in the line of this storm. We'd been on Facebook Live with our viewers for about four hours tracking the line," Tim Buckley, chief meteorologist at the station, said, the Washington Post reported.

"It was nerve-racking," said Terran Kirksey, another meteorologist at the station. "I've covered tornadoes on-air since 2010, and that was the first time one impacted my station," he added.

Tornadoes also hit the towns of Lexington and Irmo in South Carolina.

A confirmed tornado in Lynchburg, Virginia, also caused damage to multiple homes, cars, businesses and trees. Amherst and Lynchburg Public Schools were closed Monday due to the damage. In addition, straight-line winds in western Arkansas reached up to 85 miles per hour.

In the Northeast, winds, lightning and rain brought flash flood warnings to New York City, Philadelphia and cities as far south as Washington, DC. According to ABC station WABC in New York, the storm knocked down multiple trees and impacted power lines in the New York City area.

One New York City subway station looked like a waterfall as water spilled down the stairs.

The rain has even made it as far north as New England, creating a tough race day for Boston Marathon runners forced to run in 40-degree weather coupled with wind gusts of 30 miles per hour in Hopkinton, Massachusetts. In other parts of New England, roads are icy thanks to a mix of freezing rain, sleet and snow.

A storm moving east this morning is expected to bring additional snow to the Midwest and Great Lakes later this week. On Wednesday afternoon, snow is expected to travel from Nebraska through Wisconsin and Illinois. Southern Minnesota and northern Iowa could see as much as 8 inches of snow on Wednesday. Whiteout conditions are also expected across the plains states of Kansas, Nebraska and South Dakota.

More than 750 flights in and out of Minnesota and Toronto were canceled this weekend, according to the website flightaware.com.

In Oklahoma, two people were killed due to wildfires: a 61-year-old man died in Roger Mills County on Thursday, and a woman died in her car in Dewey County, the Oklahoma Department of Emergency Management recently reported. At least seven people have suffered from heat or smoke related injuries. The largest fire was in Oklahoma's Dewey County, where more than 240,000 acres had burned by Sunday morning.