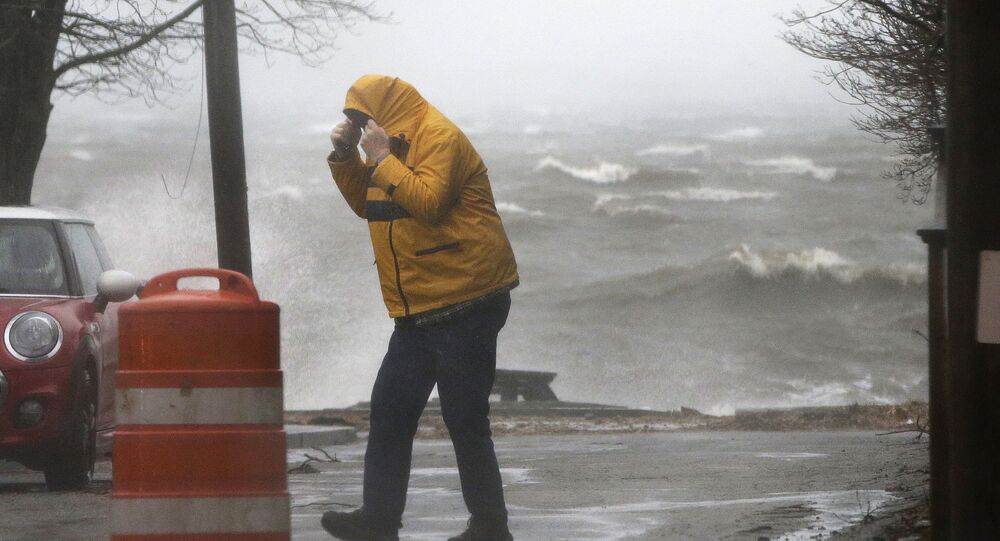 The third nor’easter to plague New England in less than two weeks picked up momentum Tuesday morning and is expected to bring heavy snow and dangerous blizzard conditions to some areas.

At least 175,000 customers lost power by noon Tuesday across Massachusetts, with the towns of Norwell, Pembroke and Cohasset most impacted. Thousands of others are also without power in other New England states.

On Tuesday, the National Weather Service issued a blizzard warning for the coasts of Maine, New Hampshire and Massachusetts. According to the warning, "winds gusting as high as 55 miles per hour will cause whiteout conditions in blowing snow. Total snow accumulations of 13 to 18 inches, with localized amounts around 20 inches, are expected." Blizzard conditions have already blanketed Boston, Cape Cod and the South Shore of Massachusetts.

New York and parts of New Jersey, Pennsylvania, West Virginia and North Carolina are also under a winter weather advisory.

In a press conference early Tuesday afternoon, Massachusetts Governor Charlie Baker cautioned residents to stay at home due to the strength of the wind gusts and the amount of snowfall expected.

"It would be very difficult for [utility crews] to get out there and start working those power outages until the snow stops falling and the wind stops blowing," he said. He also urged residents to immediately call 911 if they discover downed power lines.

The storm, which is expected to last most of Tuesday, has already disrupted road and air travel.

As of noon Tuesday, more than 860 flights to and from Boston Logan International Airport had been canceled, according to the flight-tracking service FlightAware. Airlines have already preemptively canceled 80 Logan flights scheduled for Wednesday.

Amtrak has also canceled scheduled passenger rail trips between Boston and New York City for the rest of Tuesday. Service will be resumed Wednesday.

In addition, the Massachusetts Bay Transportation Authority, which provides public transportation services in the Greater Boston area, is running on a reduced schedule. All ferry service has been suspended.

By 6 a.m. Tuesday, officials with the Massachusetts Department of Transportation (MDOT) had already sent out more than 3,300 crews to clear roadways. Transportation officials have also reduced speed limits on the Massachusetts Turnpike to 40 miles per hour from the New York border to Boston to ensure drivers' safety. However, the roadway restriction has not prevented crashes from taking place. Several accidents involving jackknifed tractor-trailers have already been reported, according to MDOT.

Although the first two storms this month resulted in thousands of power outages, meteorologists don't expect this nor'easter to cause widespread blackouts.

The first storm brought heavy snow, rain and strong winds, but left more than 1.6 million homes and businesses without electricity. In addition, thousands of flights were canceled because of the storm and Virginia declared a state of emergency. The second nor'easter brought three feet of heavy, wet snow and caused more than 1 million power outages.

But according to Chris Besse, the Public Information Coordinator of the Massachusetts Emergency Management Agency, "What we've been hearing so far for this storm is that for most of the state, the snow will be a little dryer, and therefore not as likely for power outages, but particularly for southeast Massachusetts/Cape Cod area, with the heavy wet snow and those strong winds, there is that risk."

With regards to preparations, Besse said, "You know, battery-powered flashlights, radios, keep their electronics charged and if their power does go out, have a plan. Maybe someone they can stay with."

Tuesday morning, Boston Mayor Marty Walsh said that it was unclear whether schools would reopen Wednesday.

"Originally we thought the snow was gonna end early in the afternoon, so it would be good for tomorrow, but who knows yet. We don't know yet until as we get into this day," said Walsh.