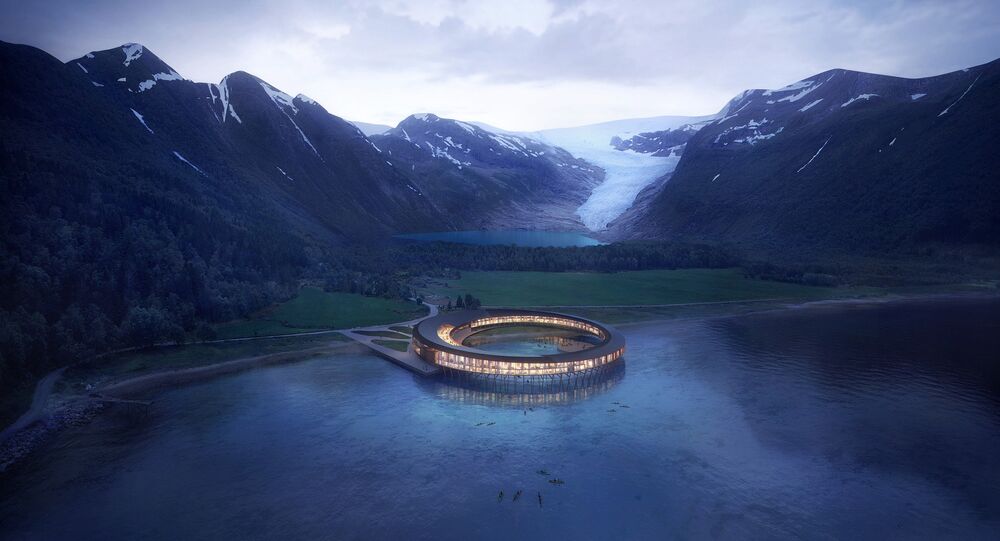 The quaintly-shaped hotel with a 360-degree view of one of Norway's largest glaciers will become the first to use energy-efficient standards in the Arctic.

Svart, the hypermodern hotel built at the foot of the Svartisen glacier in the clear waters of an Arctic fjord, will become the first in the world designed after energy-efficient "powerhouse" standards, according to its website.

Svart will be built partly on land and partly on columns resting on the bottom of the fjord, offering a "near-transparent" feel, which is a special selling point, given that it is located in a "midnight sun" area. When the 15,000 square meter large hotel will be completed in 2021, no highway will lead to it. To visit the hotel, tourists will have to use a boat, and an energy-neutral one at that.

The UFO hotel that'll leave you starry-eyed! Stunning renderings emerge of spaceship-style lodge that's set to open beneath a glacier in the Arctic Circle
Hotel Svart will sit in a breathtaking location at the foot of #Svartisen — #Norway's second largest glacier pic.twitter.com/mLiajkbCC2

​The goal is to create a hotel that leaves a minimal footprint on the pristine Norwegian nature. The world's first "energy-positive" hotel will consume 85 percent less energy compared to its existing peers. Solar energy will suffice both for the construction of the building and for its future operations.

Svart was designed by the Norwegian architecture bureau Snøhetta in collaboration with the tour operator Arctic Adventure of Norway. Svart is one out of five "powerhouse" hotels to be built in Norway, and the first one ever to be situated in an arctic climate.

​"Building in such a precious environment comes with some clear obligations in terms of preserving the natural beauty and the fauna and flora of the site. It was important for us to design a sustainable building that will leave a minimal environmental footprint on this beautiful Northern nature", Kjetil Trædal Thorsen of Snøhetta said in a press-release.

While the ultra-modern hotel's trademark circular shape is said to offer scenic views of the fjord, the architects admitted that the form is inspired by local traditions of coastal constructions used for building fishermen's cabins and contraptions for drying fish, although using heavily updated "green" solutions.

The world’s most environment-friendly hotel to be launched in Norway:https://t.co/Yymx47RrNb@snohetta @Helgelending1 #powerhouse #svart #Svartisen pic.twitter.com/bZE8Ol9Ksz

​Everything from hotel rooms, restaurants and terraces will be placed in a way to make the most of the energy of the sun. The roof of the hotel will be covered by locally produced solar panels. A large part of the building will be made of wood, which gives off lower greenhouse gas emissions than steel and concrete.

Svartisen ("Black ice") is a collective term for two major glaciers located in northern Norway and is part of the natural park with the same name.

#Glacier #Svartisen The blue of the ice is amazing pic.twitter.com/a5GKASKvUR