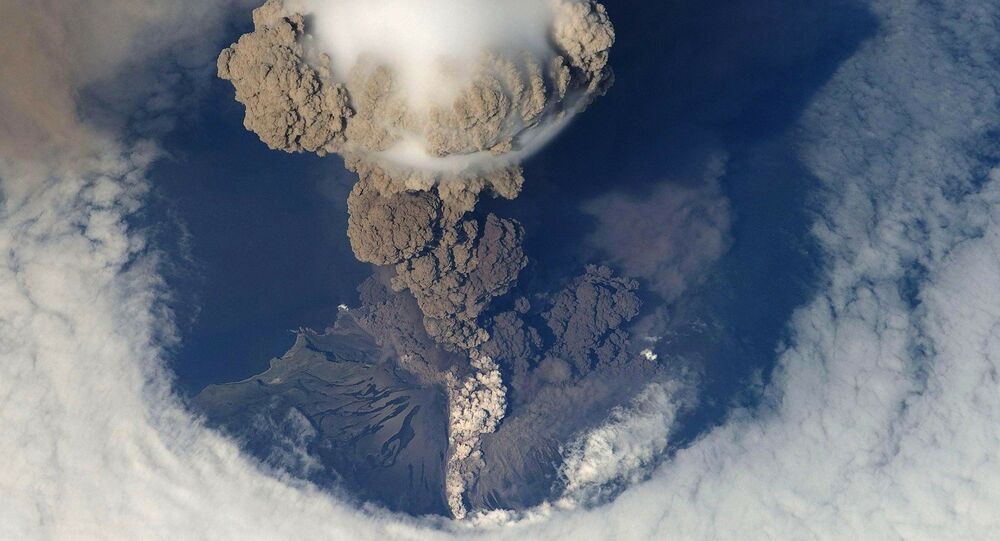 A huge underwater supervolcano has been tracked in the Japanese Archipelago, with scientists already warning that its possible new eruption may kill at least 100 million people.

Speaking to Sputnik, Yoshiyuki Tatsumi of Kobe Ocean-Bottom Exploration Center explained that in order to predict volcanic eruptions, including massive ones, it is important to accurately locate a magma pocket as well as its size and shape.

"So we chose the Kikai Caldera, the only place in the water area of the Japanese archipelago, where a gigantic eruption of an ancient underwater volcano took place 7,300 years ago," he said.

Commenting on reports that there is only one percent probability of an eruption of the Kikai Caldera supervolcano in the next hundred years, Tatsumi drew a parallel with the deadly earthquakes in Kobe and Kumamoto in 1995 and 2016, respectively, which he recalled were predicted only the day before they took place.

READ MORE: Over 80,000 People Evacuated Due to Threat of Volcano Eruption in Philippines

"Thus, the probability of the current eruption is quite high and I don't exclude that it may occur tomorrow. Even so, the eruption of a giant volcano is not recognized as a natural disaster," Tatsumi emphasized.

He also rejected speculation that volcanic activity may be fueled by global warming or nuclear tests conducted by North Korea.

"It is the condition of the Earth's crust which makes the greatest impact on volcanic activity," Tatsumi said.

Russian seismologist Alexey Lyubushin, for his part, recalled that massive geological catastrophes have a period of recurrence, the so-called time scale, which numbers hundreds of thousands of years or even millions of years.

"That's why the likelihood that the eruption will take place during our lifetime or the next two or three generations is negligible," according to him.

Lyubushin explained that the supervolcano's awakening is a rather slow process, which may last for several days and even months – something that will enable the population to brace for the eruption.

"Given the very long time spans between eruptions of super volcanoes, a [human] civilization, perhaps, will develop so much during this time that it will be easy for it to cope with such problems. And maybe, on the contrary, the civilization will destroy itself," he concluded.

Earlier this week, it was reported that scientists had discovered the underwater Kikai Caldera supervolcano to the south of Japan's Kyushu Island which is estimated to contain more than 32 cubic km (7.68 cubic miles) of magma.

Scientists warned in this regard that the supervolcano, which last erupted 7,300 years ago, may kill up to 100 million people if it erupts once again.

Over 6,000 People Evacuated in Vanuatu Over Volcano Eruption Alert