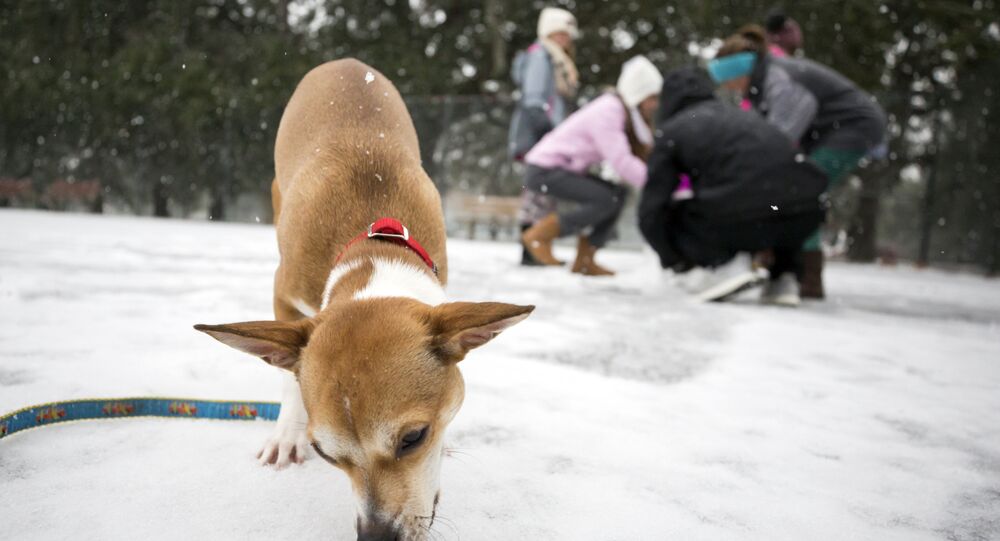 On Wednesday, a major winter storm hit the southeastern coast of the US, dumping snow, sleet and freezing rain in Tallahassee, Florida before moving on to bring dangerous cold to regions that usually experience mild winters.

The bomb cyclone (the dramatic term for a storm that loses air pressure precipitously), is expected to travel north, swiping the coastal cities of Savannah, Georgia, and Charleston, South Carolina, before hitting New England on Thursday.

Eastern Florida, Georgia, South Carolina, North Carolina and Virginia are expected to receive as much as six inches of snow while some parts of New England could see 12 to 15 inches of snow and experience powerful wind gusts.

The winter storm watch issued in Tallahassee on Tuesday is the first the city has received in approximately four years, prompting surprised Floridians to post videos on Twitter of the thick flurries. On Wednesday, the National Weather Service (NWS) reported that Tallahassee could see up to an inch of snow.

"Travel will be dangerous and nearly impossible, including during the morning commute on Wednesday," the weather service said in an advisory for northeastern Florida.

Florida Governor Rick Scott also warned residents in the northern part of the state to brace for the cold on Tuesday. Cold weather shelters have opened or will open shortly in 22 of the state's 67 counties.

On Tuesday, Georgia Governor Nathan Deal declared a state of emergency for 28 counties in the state after the NWS announced the winter storm warning.

According to the NWS, driving conditions in Charleston have became "rapidly dangerous" due to icy road conditions. On Wednesday morning, there were 31 reported incidents between Jasper and Charleston along Interstate 95, the main interstate highway on the East Coast of the US.

Cape Cod and the Massachusetts islands could also see wind gusts of 60 to 70 miles per hour and in New England and eastern Long Island, near-blizzard conditions are expected.

Merkel's Meeting With Trump Rescheduled to Friday Due to Snow Storm