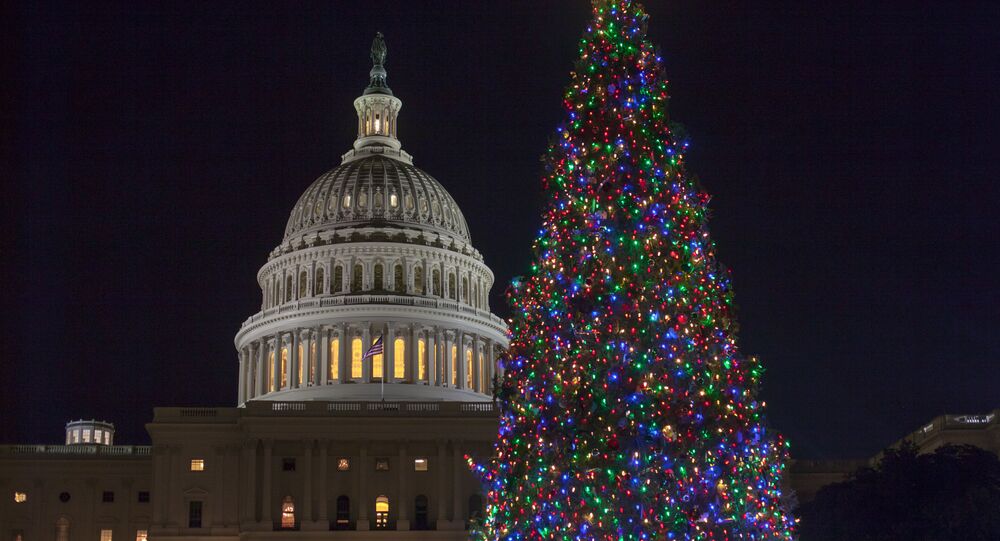 The felling, transporting and displaying of evergreen trees has been a Winter holiday tradition in the northern hemisphere for centuries, and nowhere is this Christmas convulsion as popular as in the United States, where Americans will drop over $1 billion this year to brighten their homes with the sweet scent of pine boughs.

According to an exhaustive data dive by Reuters, an estimated 27.4 million Christmas trees were purchased in 2016 in the US, and the lion's share were provided by Christmas tree farms in just a handful of states.

Just Madds ‏/ twitter
Not on My Watch! Man Shows What He Thinks About Buying Plastic Christmas Tree

An estimated 550 square miles of US real estate is devoted to growing conifers intended to be cut for Christmas trees, according to the National Christmas Tree Association, cited by Reuters.

Most US Christmas tree farms are situated in the foothill elevations of Oregon and North Carolina, and over half of those grown in the two states come from just six counties — two in North Carolina and four in Oregon.

At elevations of between 2,500 and 3,000 feet above sea level, North Carolina's Ashe County is the top grower, providing approximately two million trees in 2012, according to the most recent data available.

The privilege of being able to purchase a holiday evergreen tree that has been growing for an average of seven years does not come cheap, and tree prices rose steeply in 2016 thanks to a tight market.

Of course, some Americans prefer a product that they can reuse, turning to artificial trees, primarily manufactured in China for the US market, according to data from the US Commerce Department.

Of the (formerly) live trees, however, the short-needled and densely-branched Fraser Fir is the top seller, with almost 8 million sold in 2014, according to the most recent data.

Following behind the Fraser is the Noble Fir, with almost 5 million sold in that year, and others, including the Grand, Douglas, and Balsam Firs, as well as appearances by the Colorado Blue Spruce and the Scotch and White Pines.

While most Americans know little about where and how these trees are grown — and most of the cut trees will be kicked to the curb in the two weeks following Christmas — the iconic scent and beauty of the conical evergreen remains the key domestic symbol of Western Winter holidays.

The History of Christmas Carols