Located in Norway's Arctic domains, the Svalbard Global Seed Vault has been hailed as a failsafe storage facility built to withstand the test of time, yet is scheduled for reconstruction after only nine years in operation.

Commonly known as the "Doomsday Vault," the secure seed bank was specifically designed to be immune to natural calamities, industrial catastrophies and even nuclear bombs and placed halfway between mainland Norway and the North Pole.

However, climate change around the remote Svalbard archipelago has spurred reconstruction of a vault earlier proclaimed as the world's sixth best invention by the magazine Time.

The rebuilding process is taking place only nine years after it was opened by the then-President of the European Commission José Manuel Barroso and the then-Prime Minister of Norway Jens Stoltenberg.

"What has happened since we completed the building in 2008 is that climate change has given us some challenges to boot. Changes in temperature and weather conditions mean that the permafrost has not been restoring itself as expected," Hege Njaa Aschim, communications director at the Norwegian Directorate of Public Construction and Property (Statsbygg) explained to the Aftenposten daily. 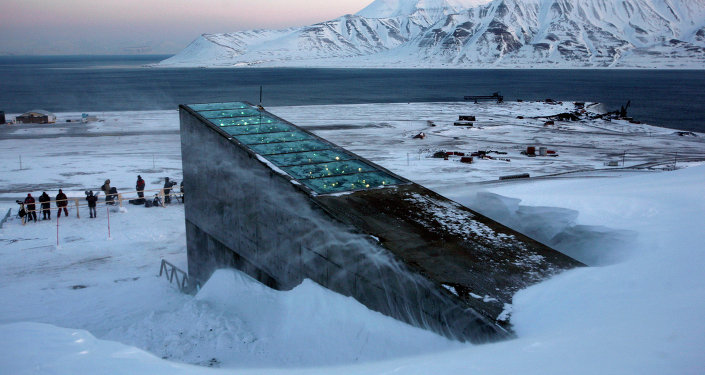 © AP Photo / John McConnico
Global Doomsday Seed Vault Almost Flooded as Arctic Melts
"The signature building itself is still standing on the hill. It's the tunnel part into the mountain vaults that has given us some challenge," Njaa Aschim explained.

A total of 17,000 cubic meters of loose mass around the tunnel's opening will be removed and replaced by a new waterproof concrete structure. At the same time, the foundation will be reinforced and the drainage and cooling system strenghened to prevent meltwater from the nearby plateau from gathering at the entrance to the tunnel.

900,000 seeds. One mountain on a remote island in the Arctic. Since Richard Christiansen's recent visit, the Svalbard Global Seed Vault has been making front page news. With temperatures steadily rising, the permafrost recently melted causing flooding in the entrance of the tunnel. Thankfully, the seeds are ok 👌🏻#AdventureToTheNorthPole #OnTopOfTheWorldWithRichard

In addition, a new service building designed by the Snøhetta company is planned at about a 40 meter distance from the opening. The new bulding of around 180 square meters will take over the necessary functions in connection with the reception and the registration of the input in a bid to reduce the number of heat sources inside the vault itself.

"We need to do something so that we can tackle a warmer and wetter climate. This is about the safety of the world's heritage, so that we have something to grow in the future. It is also about Norway's reputation as well," Njaa Aschim said.

The Doomsday Vault contains 930,000 seed types collected from around the globe and stored under conditions safe for long-term storage in order to preserve the great genetic variation within the world's agriculture. The vault has a reserve capacity forthree million seedlings.

© AFP 2019 / MARTIN BUREAU
Arctic Norway Boasts Another 'Doomsday Depository'
The Doomsday Vault's status as an impregnable fortress began to melt away earlier this year, as tons of meltwater gushed into the building entrance's tunnel. Although no seeds were damaged, the building's reputation has clearly been tarnished.

Following the breach, an agreement with an advisory firm to come up with an assortment of remedial measures was brokered. Upon being given the green light by the Ministry of Agriculture and Food, construction will begin next spring and will be completed in 2019.

​The Global Seed Vault has received considerable media attention over the years, not least from artistic circles. In 2014, Dyveke Sanne adorned the entrance to the vault with a trademark installation called Perpetual Repercussion.

T H E V A U L T | global seed vault in norway designed by architect peter w søderman and built in concrete to store and preserve a wide variety of plants.