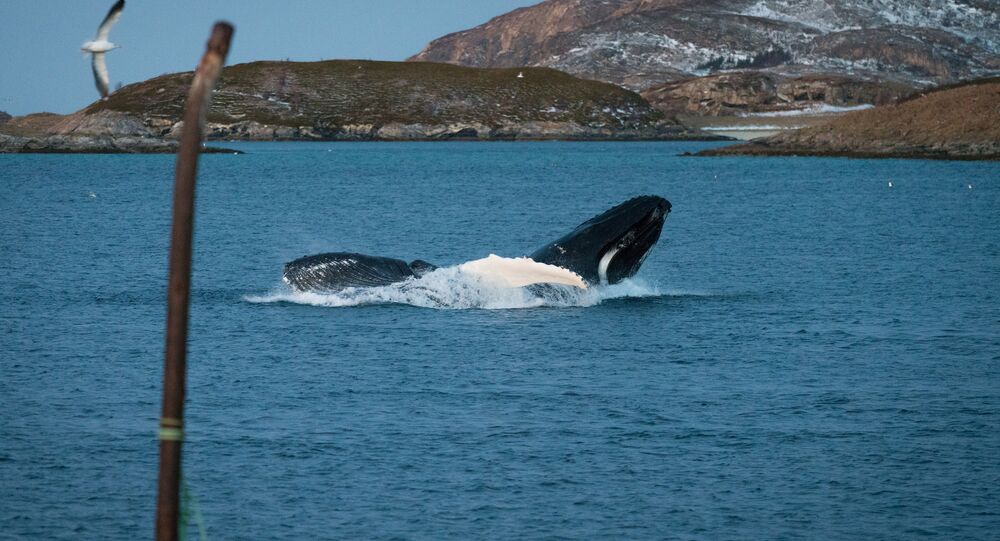 Norway is currently one of the few nations in the world that still conducts commercial whale hunts, alongside Iceland, Japan and the Faroe Islands. All of these countries come under regular attack from Anonymous hackers in the #OpWhales campaign, the Norwegian Aftenposten daily reported.

"As a result of whaling, there are several groups who see Norway as a target," Lone Charlotte Pettersen of the National Criminal Investigation Service (Kripos) told Aftenposten.

Unlike traditional anti-whaling activists like Sea Shepherd that engage in seasonal activities like sabotage against whaling boats attempting to interrupt the hunt, the so-called "hacktivists" attack Norway year-round. Anonymous' most frequent targets include banks, authorities, media, tourist and academic institutions.

© CC BY-SA 2.0 / Norsk olje og gass / Øyvind Knoph Askeland
Norway Snubs Greens' Lawsuit, Makes Huge Arctic Oil Investment
The Norwegian Fisheries Ministry is one of the foremost targets. Earlier this year, it was subjected to a targeted attack in the Netherlands, which rendered its website inaccessible. Since then, specific measures were introduced to prevent this.

"They want to get at Norway. Therefore, it may be a sheer coincidence who is affected. As long as they can inflict harm, they are satisfied," Pettersen said, suggesting that Anonymous also encourages other people into procuring malware and using it against Norway. "We would like to have better control in this case. It is generally a challenge for Kripos and the police," Pettersen continued.

"it's indefensible from the point of view of the animal's well-being to hunt them during pregnancy" #OpWhales pic.twitter.com/SubcwDrHfR #BluePlanet2

​In 2016, the extent of hacker activity in Norway was measured as "low." However, the National Security Authority (NSM) has seen an increasing trend in the past several years.

Although whaling is a controversial practice internationally, it enjoys broad political support in Norway, which lodged a formal objection to the international whaling moratorium introduced in 1986. In 2017, the Norwegian Fisheries Ministry increased the Norwegian catch quota for the common minke whale to 999. For the sake of comparison, Iceland's quota for 2016 to 2018 is 224 whales, while Japan's whaling quota is 333 whales a year. Previously, Fisheries Minister Per Sandberg stated that he wanted to double the whaling quotas.

​Anonymous, a hacking network with worldwide reach, fights cyber surveillance and what it considers abuse of power through attacks against websites, as well as demonstrations and campaigns.

Two years ago, five government-owned sites in Iceland (including those of the Environment, the Foreign and the Interior Ministry and the Prime Minister's Office) were taken down as part of an anti-whaling campaign, becoming inaccessible to users.

A Little Help From My Friends: Officials Lead Trapped Humpback Whale to Freedom

The Whale Whisperer? New Jersey Boaters Get Up Close, Personal With ‘Goliath’