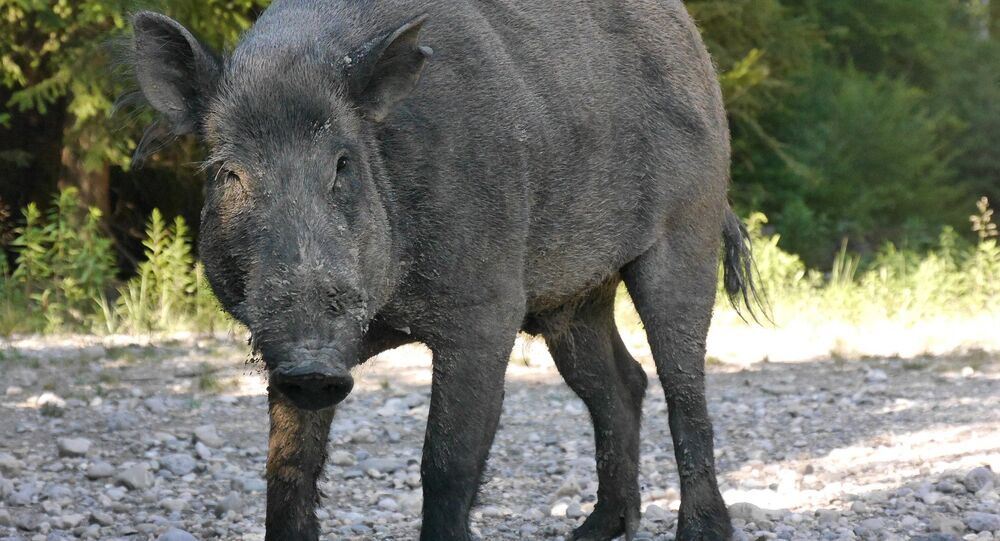 Unprecedented security efforts were undertaken during the recent EU summit in the Swedish city of Gothenburg, resulting in Swedish displeasure over traffic jams. One of the roads appeared to completely sealed off, except for French leader Emmanuel Macron... and a wild boar.

A maverick wild boar dared to defy the extensive precautions undertaken during the EU summit held in Gothenburg from November 15-17 and was dangerously close to catching French President Emmanuel Macron unawares, while his entourage was on his way to the city, Swedish national broadcaster SVT revealed, citing police footage of the incident.

The intruder, first erroneously identified as a moose, was later pinpointed as boar thanks to helicopter footage. The boar crossed the road halfway and ran several hundred meters along the median line while Macron's cortege was approaching.

​Prior to the EU Summit, multiple roads were closed, causing traffic jams, in particular on highway 40 to the Gothenburg airport of Landvetter. This route was used heavily by the arriving delegations as well as welcoming crews and was put under extra police surveillance.

Although many locals voiced their outrage at the rigorous security measures resulting in holdups and delays, no incidents were reported during the EU Summit.

​The invasion of wild boars, however, has become a growing problem for Swedish agriculturalists, which lose up to 7 percent of their crops to the growing horde of swine. In 2015 alone, Swedish farmers' losses to due to wild boars' encroachment amounted to SEK 1,56 billion ($190 million), Swedish University of Agricultural Sciences (SLU) in Uppsala reported.

​After almost two centuries of absence since being hunted to extinction in the 17th century, the wild boar was reintroduced in captivity and has grown avalanche-like since the 1970s. Today, Sweden's estimated wild pig population is at least 300,000.

Southern Sweden from Skåne to Stockholm boasts the densest populations. Wild boars are shy creatures and rarely seen in daylight. Dusk and dawn offer the best chances to see them.

​According to the Swedish Environmental Protection Agency, the problem is not with the wild boar's increasing numbers as such, but its concentration is some parts of the country.

Last year, the boar overtook the moose as the most popular trophy for Swedish hunters. In 2016, over 100,000 wild pigs were shot down, compared to 80,000 moose, wildlife specialist Christer Petterson of Environmental Protection Agency told the Götebogs-Posten daily.