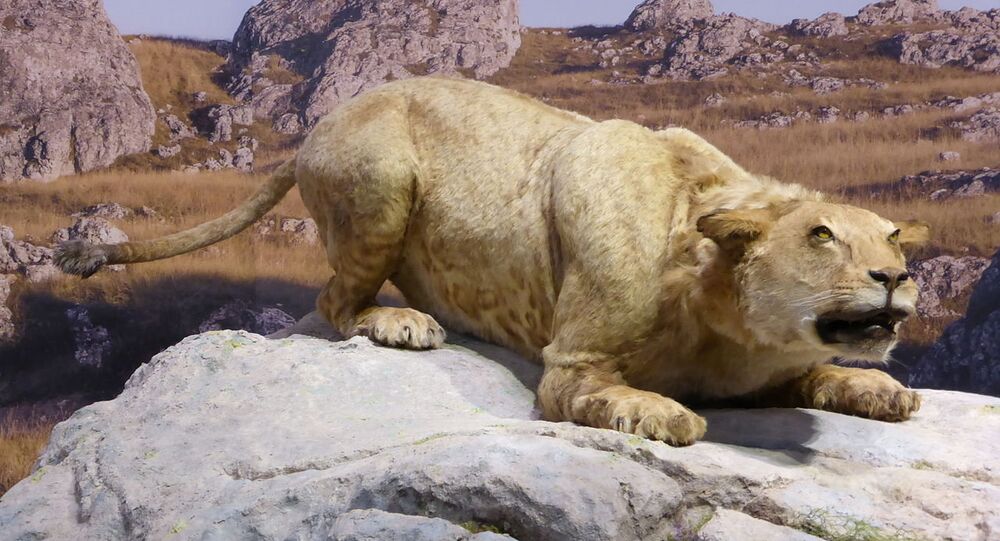 The remains of a tiny animal found on a river bank in Russia appeared to be an eight-week-old kitten from an extinct species of lion dating back to the Ice Age.

A pre-historic cave lion cub was found ideally preserved in Yakutia, thanks to the permafrost that helped keep its remains from decaying. According to Russian scientists, the creature was about one and a half to two months old when it perished. Tests are underway out to discover its exact age, but experts think it is between 20,000 and 50,000 years old. It is also unclear yet whether the cub was male or female.

Radio Sputnik spoke to Valery Plotnikov, Ph.D. Biology from the Department of Study of Mammoth Fauna at the Academy of Science of the Sakha Republic (Yakutia) about this exciting discovery.

"The preserved remains of a cave lion cub were found in early autumn of 2017 by local subsoil developers in the Ehe arghakhtah locality (which means a "bear lair" in the Yakut language), on the bank of Tirekhtyakh River in the Abyisky district of Yakutia," Plotnikov revealed.

The permafrost is melting right now, and the lion cub thawed and fell out of the coastal permafrost layers, the biologist explained.

The first cave lion skull was discovered in the cave of Franconia in Germany at the basin of the Rhine in 1810, which is why the species was called the cave lion, although the animals lived in the open expanses of the tundra as well.

"The cave lion was slightly larger than the modern one, but it didn't have a mane. There was no tassel at the end of the tail like the one modern African lions have," the scientist said.

In the Late Pleistocene period, this beast had no rivals: bears, wolves and other predators provided him with no significant competition. According to Plotnikov, the cave lions mostly fed on reindeer, noble deer, young mammoths, wild horses and muskoxen, and most likely led a solitary life.

© Photo : Youtube/807 News
'Jaw Dropping' Discovery: Fossils of Oldest Mammals Found in Southern England (VIDEO)
Earlier, some media speculated that the animal species might be brought back to life, after Dr. Albert Protopopov, head of the Department of Study of Mammoth Fauna at the Academy of Science of the Sakha Republic told The Siberian Times the preservation of the lion cub remains may allow "a cloning attempt." However, according to Plotnikov, there are no plans to clone the cave lion — scientists were only suggesting that the genome-editing technique might be feasible (which means extracting cave lion DNA and pasting it into the genome of an African lion, the closest modern relative of the extinct feline).

"Scientists have been and will continue trying to revive a woolly mammoth. As for the cave lion, no attempts to bring it back [are planned yet]," he said, adding that cloning is a specific technique which cannot feasibly be applied to an extinct animal. "Theoretically, cloning can be conducted but it is almost impossible to bring back an extinct animal [that way]," Plotnikov admitted.

The scientist also revealed that some countries, including the US, are working on restoring the genome of a woolly mammoth with the help of the Asian elephant, which is the closest relative of the extinct species.

In the late 1990s, Japanese specialists conducted an experiment within a project called "The Revival of the Mammoth": they froze a spermatozoon from a modern-day bull and, four years later, defrosted it and fertilized a cow, which then gave birth to a healthy calf.

"So, the scientists decided to find the spermatozoa of a woolly mammoth and fertilize them with the Asian (Indian) elephant. But to find mammoth genitals (scrotum) or their active spermatozoa is rather difficult and almost impossible," Plotnikov explained.

If the mammoth revival experiment is successful, it will help to develop a technique for the restoration of extinct fauna, the expert concluded.