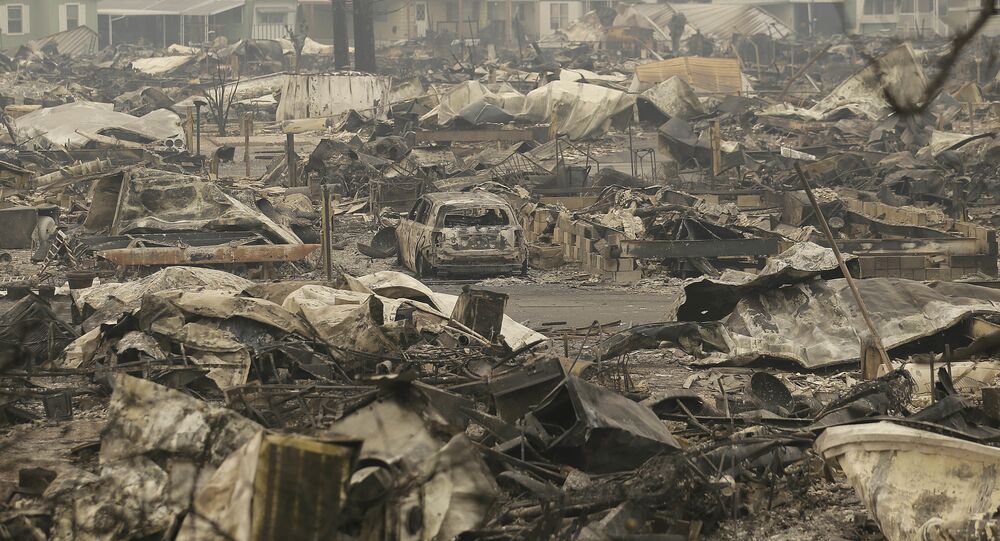 As of Tuesday, a total of 15 people have died in northern California as wildfires in the state continue to rage, destroying more than 2,000 homes and businesses so far.

Striking the heart of the Golden State's Napa and Sonoma wine country, the fire has scorched upwards of 100,000 acres since it began late Sunday night. According to the San Francisco Gate, the first fire took guests at a nearby wine resort completely by surprise.

​"It was surreal," Chris Thomas, a guest at the Silverado Resort and Spa, told SF Gate. "When I started loading stuff into the car it was a hell-storm and ash. There were 30 to 40 mph winds, I couldn't even breathe."

"[When] I ran back to the unit to get [my wife] it was so smokey I went to the wrong unit. When I found her I said, ‘Forget it, let's just go.' It went from being an annoying evacuation to something really scary," Thomas added.

​The couple was able to evacuate, and they were far from the only ones stirred from their slumber.

"We couldn't really see anything," Bradley Flores, who was alerted by neighbors to evacuate his home, informed the outlet. "We just got our dogs and got into the car and left — the wind was so bad the car was shaking."

​Per local station KQED, more than 200 people were removed from two Santa Rosa hospitals that were threatened by encroaching fires.

Tearing through North Bay, a subregion within the San Francisco Bay Area, the National Weather Service determined the blaze covered the majority of the area in smoke due to dry northeast winds, churning at 50 mph in the valley and 70 mph on mountaintops, being fanned over residences.

​In total, firefighters and first responders are dealing with 15 different fires in the region; however, the LA Times reported, officials are focusing on two: the Tubbs fire and Napa County's Atlas Peak fire, which have burned 27,000 and 25,000 acres respectively.

"Though our containment numbers haven't gone up just yet, we've at least been able to hold these fires and keep them at the current acreage," Daniel Berlant, Cal Fire's assistant deputy director, told the Times Tuesday.

With roughly 20,000 people evacuated between Sunday night and Monday, rescue efforts may not reach everyone because of the the speed of the fire's spread, Berlant later told the Sacramento Bee.

​"It's very likely the death toll on these fires will increase just based on the sheer number of homes burned and how quickly they destroyed them," the deputy director indicated.

Though fires are expected to lose ferocity late Tuesday, with speeds calming from 50 and 60 mph to single digits, Berlant added that the Cal Fire responders were informed that "mild to moderate [fire] increases" could be seen later on in the week.

​Chipping in on efforts, California's National Guard has sent more than 200 soldiers to the affected area to provide medical evacuation support and deployed six helicopters to combat the blaze, the Times reported.

​About 1,100 firefighters, 14 helicopters and six planes, along with the National Guard's choppers, are working to contain the wildfires.

Though it is too early to tell whether the flames were ignited by humans, Ken Pimlott, the director of Cal Fire, told reporters that the chance was "fairly minimal."

The biggest fires, as reported by Cal Fire, are currently burning in counties Napa, Sonoma, Mendocino, Yuba, Butte and Lake.