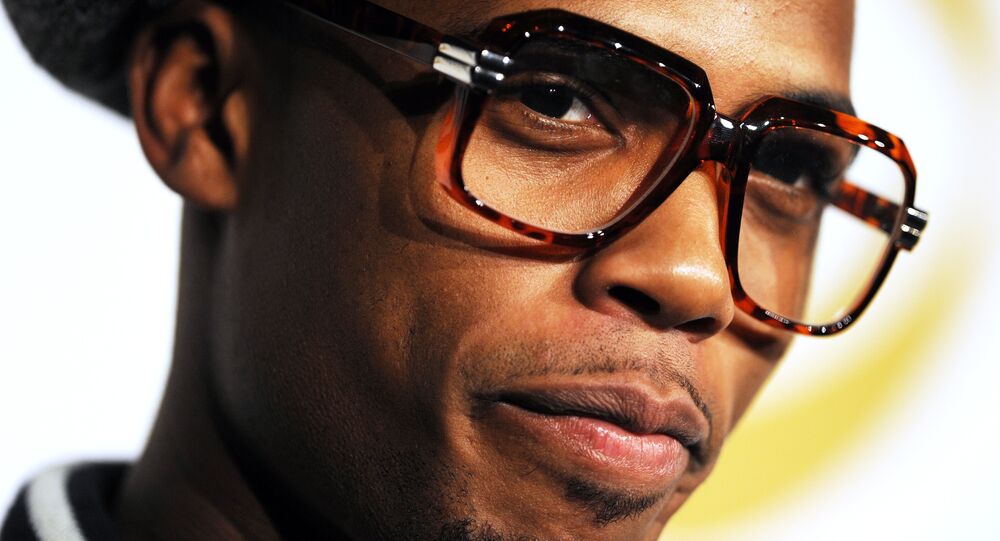 Rapper B.o.B has established an online funding campaign in his quest to determine whether the Earth is in fact spherical, rather than flat - although doubts about its legitimacy have led the platform to place it on hold.

Bobby Ray Simmons Jr. — also known as the musician B.o.B — has started a GoFundMe campaign that seeks to raise US$1 million to "find the curve."

"What's up guys! Help support B.o.B purchase and launch one, if not multiple, satellites into space. He's donated [US$1,000] to the cause to get it going, and will be keeping you updated with step-by-step documentation of the process! Help B.o.B find the curve!"

In essence, the conspiracy-minded rapper is seeking to confirm the Earth is in fact round, rather than flat, as B.o.B seemingly believes.

Flat Earth conspiracies have, bizarrely, been gaining in prominence online for some time, and B.o.B has been a frequently voluble proponent of the notion.

In 2016, he became embroiled in a Twitter spat with popular astrophysicist Neil deGrasse Tyson over his beliefs, which culminated with B.o.B issuing a "diss track" aimed at Tyson.

The cities in the background are approx. 16miles apart… where is the curve? please explain this pic.twitter.com/YCJVBdOWX7

@bobatl Polaris is gone by 1.5 deg S. Latitude. You’ve never been south of Earth’s Equator, or if so, you've never looked up.

In response, the astrophysicist's rapping nephew Stephen, who spits under the name Tyson, released a track of his own, aimed at B.o.B, named "Flat to Fact."

"He learned the game from Carl Sagan, you can never check him, you say the Earth is flat and then you try to disrespect him? I'm bringing facts to combat a silly theory, because B.o.B has gotta know the planet is a sphere, G. Very important I clear this up, you say Neil's vest is what he needs to loosen up? And he's a Mason 'cause the brother's getting paid? Can't fool the people B.o.B they know what's up, I'm in the Hayden Planetarium getting shoulder rubs. I think it's very clear that Bobby didn't read enough, and he's believing all this conspiracy theory stuff…"

A Load of Baloney?

Whether the campaign is sincere or a publicity stunt is unclear, although B.o.B's choice of GoFundMe for the "project" may not be incidental.

The platform, unlike competitors Kickstarter and Indiegogo, allows campaign starters to claim funds before the total is achieved.

Thus, while B.o.B is unlikely to achieve his US$1 million goal, he can theoretically withdraw and keep whatever is donated whenever he wishes — and spend it on whatever he wishes.

Or so B.o.B may have thought.

The campaign, posted September 21, hasn't attracted very much interest from donors — as of September 27 it had raised a comparatively paltry US$2,681 from 96 individuals, or just over one 500th of the total, with contributors typically giving a mere US$5 each.

Still, this is more than enough to actually prove the Earth isn't flat. Perhaps US$250 at a maximum would purchase a GoPro camera and a weather balloon, which is all one needs to achieve that goal, as many people — including young children — have previously proven on YouTube.

Nonetheless, while benefactors aren't spending big, the comments section is rife with passionate support for B.o.B's ostensible quest for the truth.

"I want to know the result with no bias. I have absolutely no bias, I want to see what is out There! Non-nasa, non-government babbbyyy," said one donor, who committed US$5.

"If the BBC are so sure it's a spinning and there are rockets flying people back and forth to and from the ISS on a regular basis (even though it is moving at 17,000 mph and is the size of a football pitch but was assembled in space) then why have they never made a documentary about space travel? Not one single fly on the wall detailed documentary ever! Does no one else find this weird?" said another, who pledged US$50.

However, B.o.B's dreams, whether they are legitimately to confirm the curvature of the globe, or to defraud donors, may be dashed.

On the evening of September 26, GoFundMe opted to place the campaign on "hold," while donors can still pledge money, B.o.B cannot access them, and if B.o.B cannot prove the veracity of his ambitions, the funds will be refunded.

"GoFundMe's terms and conditions are available at gofundme.com/terms. We will remove any campaign that violates our terms, but GoFundMe is also an open platform, and ultimately it is up to the GoFundMe community to decide which campaigns to donate to. Although this campaign does not presently violate our terms of service, we have placed the campaign funds on hold while we work with the organizer to ensure funds are managed appropriately," a spokesperson for the platform said.

Japanese Beauty Has to Find Herself a Husband via Crowdfunding