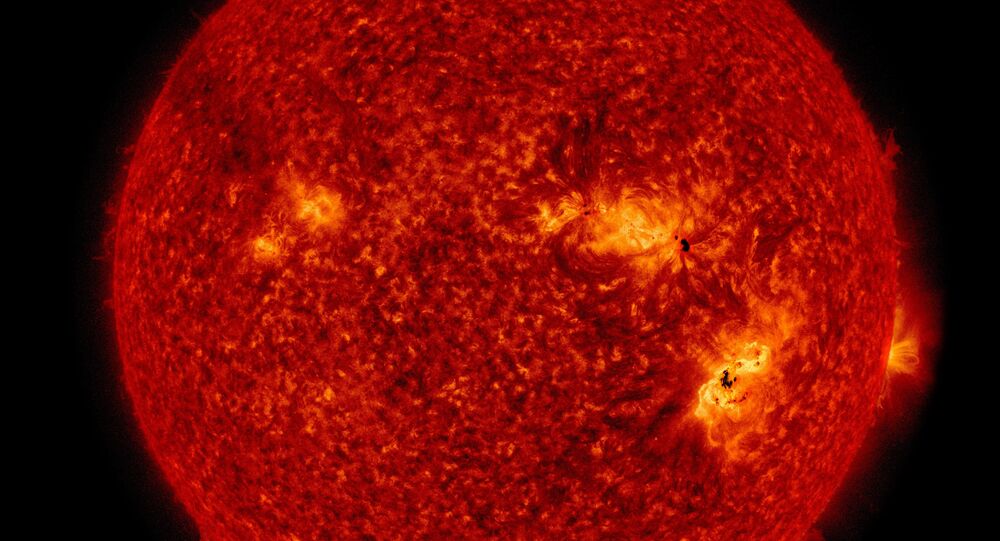 Another powerful solar flare appearing on Friday has caused scientists concern. The intensive solar activity at its "11-cycle minimum" may lead to the wide-scale disruption of communications and electronics around the whole Earth.

MOSCOW (Sputnik) — The sun shot out another huge flare of the strongest X-class, which reached its peak at 8:00 GMT on Friday, according to a solar activity graph by the Laboratory of Solar X-ray Astronomy of Russia's Lebedev Physical Institute of the Russian Academy of Sciences (LPI RAS).

Earlier in the day, a representative of LPI RAS announced that the planet was experiencing a severe level-4 geomagnetic storm, with 5 being the worst. The storm is  nearly 10 times more intense than expected.

According to the data collected by the laboratory, a series of solar flares kicked off in the beginning of this week, Initially, five minor M-class flares occurred, with an X-class flare taking place on Wednesday, followed by an extra strong X9.3-class flare.

Experts say that the string of bursts on the Sun is a natural consequence of the changes, which has happened in the solar corona over the last three days. Within the period, two large groups of sunspots accumulated an enormous amount of energy, which was emitted in a series of flares. As of today, it is still challenging to predict the exact consequences of this natural phenomenon.

Meanwhile, NASA managed to capture spectacular images of the two significant solar flares emitted earlier this week on the Sun. In spite of the intensive solar activity over the last few days, harmful radiation from a flare cannot pass through the atmospheric "shield" of the Earth, NASA's specialists say. But if the "solar storm" is powerful enough, it can affect the layers of the atmosphere where communications signals are and eventually lead to the disturbance of electronic devices and hardware odd functioning.

Two solar flares were released by the Sun this morning, one of which was the most powerful flare recorded since 2008 https://t.co/XpSiMdU159 pic.twitter.com/oYgptLJKyj

But the real danger from solar flares is that large ones are usually followed by releases of plasma as well, in a process called coronal mass ejections (CME). CMEs are the cause of solar storms that could potentially devastate a modern industrial civilization such as ours.

© NASA . NASA/GSFC/SDO
Largest Solar Flare in Decades Blacks Out Communications Across Planet (PHOTOS)
The largest solar storm on record so far is the 1859 Carrington Event, which shut down telegraph machines on two continents — but this was before the pioneering research into electricity by inventors such as Thomas Edison and Nikola Tesla. The scientific journal Atmospheric Environmental estimated in 2013 that if a Carrington Event-sized solar storm were to strike Earth, it could cause as much as $2.6 trillion in damage to the US alone — frying electronic equipment, knocking planes out the sky and other unimaginable catastrophes in an electrified world — far and away the costliest disaster in American history.