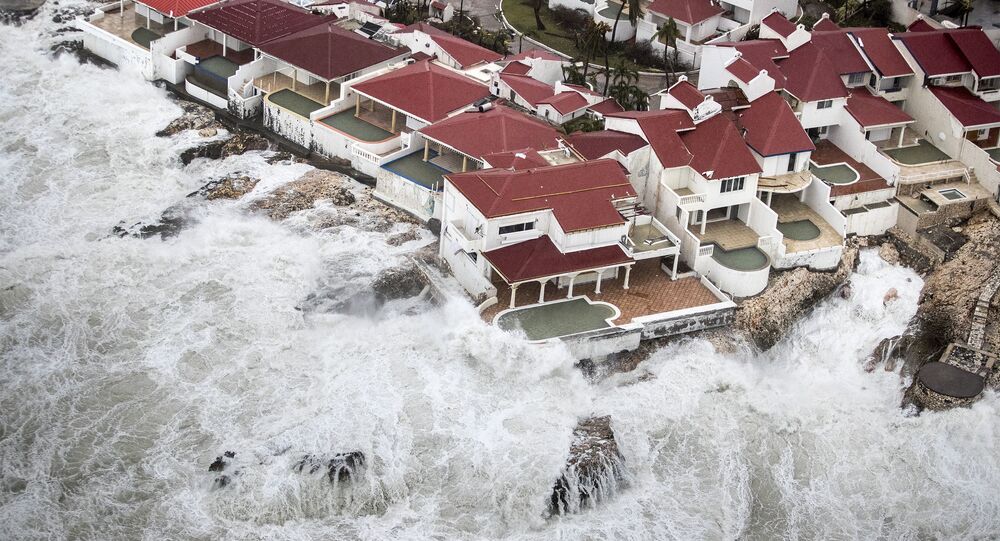 As Hurricane Irma wreaks havoc in the Caribbean, Sputnik takes a look at whether technology could be used to "switch off" tropical storms.

Hurricane Irma has killed at least 13 people and caused widespread destruction as it hurtles across the northern Caribbean.

The tiny island of Barbuda is said to be "barely habitable," and the Category 5 hurricane is due to hit the low-lying Turks and Caicos Islands later on Thursday, September 7.

With such vast amounts of money involved, there have been calls for research into stopping hurricanes in their tracks.

In 2012, Stephen Salter, emeritus professor of engineering design at Edinburgh University, had teamed up with Bill Gates and inventor Nathan Myhrvold to come up with an ingenious product was designed to cool the waters of the tropical regions where hurricanes and cyclones are formed.

But two climate science experts told Sputnik they thought the idea of mankind being able to stop hurricanes was in the realms of science fiction.

"The amount of energy contained within a tropical cyclone is extremely large, far beyond anything we're able to manipulate," Dr Adrian Champion, from Exeter University, told Sputnik.

"I wouldn't give any credence to these proposals. There may be elements of physics and truth in these proposals, but the overall effect on a hurricane, I wouldn't see as being viable at all, and even if you could generate any small effect, measuring that effect would be near impossible anyway," Professor Allan told Sputnik.

Anatomy of a Hurricane

Hurricanes, as they are known in the western hemisphere, are a form of tropical cyclone.

They are caused when warm, moist air rises upward from near the surface of the ocean in tropical regions.

© AP Photo / NOAA
In this geocolor image captured by GOES-16 and released by the National Oceanic and Atmospheric Administration (NOAA), Hurricane Irma, a potentially catastrophic category 5 hurricane, moves westward, Tuesday morning, Sept. 5, 2017, in the Atlantic Ocean toward the Leeward Islands.

Air from surrounding areas with higher air pressure is then sucked in and the whole cloud system begins to spin.

The hurricanes that form off the coast of South America tend to head north west and usually only dissipate after they reach a sizeable landmass like the United States.

Hurricane Irma is raging but we have great teams of talented and brave people already in place and ready to help. Be careful, be safe! #FEMA

Climate Change Has a Part to Play

​Professor Allan said Hurricane Irma was one of the most powerful tropical cyclones ever seen in the Atlantic, and he said climate change was likely to make them even stronger in the future.

"It's pretty clear that the most intense tropical cyclones and hurricanes will become even more intense in terms of their maximum sustained wind speed, but particularly the total rainfall and also the storm surges because of the wind but also because the sea levels are higher as the planet warms," he told Sputnik.

​Professor Allan said some people had proposed geo-engineering might be used to reduce this global warming.

"Some people have proposed technology to mitigate the amount of warming of the planet produced by greenhouse gases, like mimicking a volcanic eruption which puts particles in the air which reflects sunlight back to space, but even in these proposals the technology is pretty sketchy and whether you would do more harm than good is anyone's guess really," Professor Allan told Sputnik.

Irma, which is destined to reach Florida at the weekend, comes hard on the heels of Hurricane Harvey, which devastated Texas in August, causing an estimated US$180 billion worth of damage.

Hurricane Irma: Tiny British Colony Hunkers Down and Prepares for the Worst