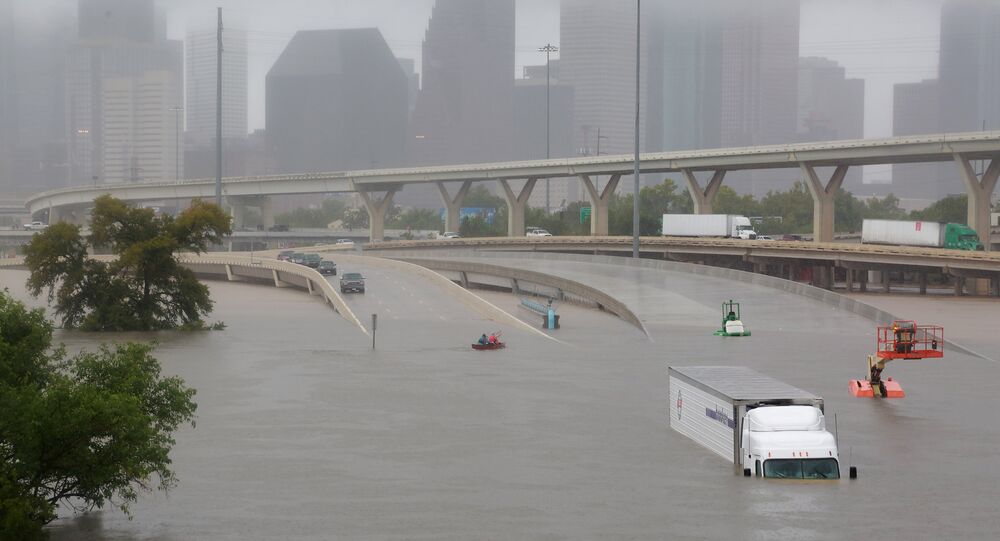 Various disaster modeling firms have chimed in on the impact Harvey will have on the American economy, and the news isn’t good.

Weather firm AccuWeather has estimated that the storm will cause a jaw-dropping $160 billion in damages, an amount equal to 0.8 percent of the US economy. "Parts of Houston, the United States' fourth-largest city, will be uninhabitable for weeks and possibly months due to water damage, mold, disease-ridden water and all that will follow this 1,000-year flood," said AccuWeather President Joel Myers in a statement.

"AccuWeather cautions that the negative impact from the storms are far from over. There will be more flooding, damage, fatalities and injuries," he added. "We urge all citizens near the path of Hurricane Harvey to remain vigilant and be prepared to take immediate action if flood waters rise."

Disaster-modeling firm Enki Research had a more conservative estimate: that Hurricane Harvey will cause $42 billion in damages, still making it one of the costliest storms in American history. Enki initially placed their estimate at $30 billion, but shot it up overnight as flood control measures in Louisiana were overwhelmed on Tuesday night.

Thank you for rescuing thousands of pets and other animals in #Texas #HurricaneHarvey #HoustonStrong #PrayforTexas #twitter pic.twitter.com/uCh3oTEgcG

"If Harvey were your normal hurricane it would be probably a US $4 billion event," said Enki founder Chuck Watson to AFP. "That would be tragic for the people affected, but for the effect on the macroeconomy – we wouldn't be talking about it at all."

By comparison, the infamous Hurricane Katrina in 2005 caused $118 billion in damages. Hurricane Sandy, which swept the Eastern Seaboard and into the Midwest, caused about $75.9 billion in damages in 2012. Harvey is the most destructive storm to hit the US since Sandy, and may even exceed it and Katrina in destruction depending on what happens in the next few weeks.

This one of the two shelters they have in Port Arthur and it's flooded pic.twitter.com/P0sDPuFxUd

Since Harvey struck Texas, which is the center for key economic sectors such as energy and air cargo and would be the world's 10th biggest economy if it were a sovereign state, it has had a profound effect on the US economy that could reverberate through the entire nation.

The Wall Street Journal estimates that a full 15 percent of US oil refining has been halted by the disaster, and Goldman Sachs estimated on Monday that the disruption Harvey caused to oil and natural gas production could shave 0.2 percent from US GDP growth in the third quarter of 2017. Petroleum analysis firm GasBuddy.com estimated on Wednesday that gas prices would rise 15 to 25 cents per gallon nationwide as a result.

All ticket, concessions and parking revenues from this three-game series are being donated to Hurricane Harvey relief efforts.

Some 30,000 Texans are now homeless and living in shelters, with their houses destroyed or irreparably damaged by the storm. Federal Emergency Management Agency (FEMA) Administrator Brock Long stated that 210,000 Americans have registered for disaster assistance thus far, and the number will climb in the coming weeks.

But there is good news: bit by bit, Houstonians are returning to their homes as the city is cleared of water. The National Weather Service in Houston reported that "tropical storm warning, storm surge watch, and flash flood watch have all been canceled. Improving weather conditions to come!"

Bush Airport will be resuming limited flight operations today at 4 p.m. Here's everything you need to know: https://t.co/VQDzKRy7gW

Death Toll From Hurricane Harvey in Texas Rises to 30 - Reports

Harvey's Flood Waters May Allow Over 300 Gators to Escape Park