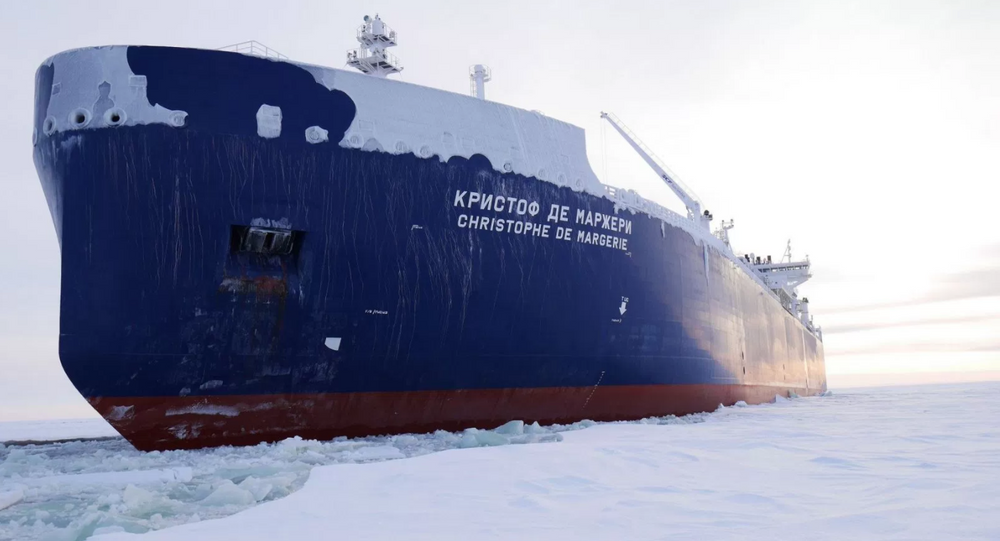 For the first time in recorded maritime history, a commercial tanker ship has sailed across the Northern Sea Route without the aid of an icebreaker.

As ice on the Earth's northern pole melts with increasing speed, new shipping routes — long promised but only now realized — have opened up the possibility of faster and less expensive transport between many of the world's ports.

The 984-foot Russian tanker Christophe de Margerie has, on its maiden voyage, transported liquefied natural gas (LNG) from Norway to South Korea in just 19 days, some 30 percent faster than the normal Suez Canal route, according to Ecowatch.com.

Transit across the icebound Arctic Ocean took took just six and a half days, according to data, and the ship averaged some 16 mph through ice fields which at times were four feet thick.

The first-time Arctic transit of a commercial tanker vessel demonstrates "the economic potential of using the Northern Sea Route for large-capacity vessel transits," according to Sovcomflot, the ship's owner, cited by Ecowatch.

Sovcomflot assertes that the northern sea route can now be made year-round, not only in the summer months with the assistance of icebreaker ships.

The Christophe de Margerie, named after a former Total S.A. CEO who died in 2014 — known to be a friend to Russian energy export — is built to withstand ice up to seven feet thick, and is expected to make the unassisted Arctic journey a consistent part of its duties.

Although previously unprofitable to ship LNG via the northern route due to the expense of icebreaker assistance, the rapidly-melting solar ice cap — seen to be a result of increased global warming as a result of human-induced climate change — is permitting shipping and energy firms to rethink the practice.

If the program remains profitable, the Christophe de Margerie will be only the first of 15 similar shipping tankers to be built, according to a report by The Guardian.

Noting "the paradox of climate change," a Greenpeace spokesperson told CNN that, "the fossil fuels we're burning are allowing access into areas that were previously protected by ice."

Similarly, the BBC cited a Seas at Risk spokesperson who claimed: "We're concerned that this is a commercial opportunity that has only opened up because of global warming, and we're especially concerned that having taken advantage of the thinning of the ice, shipping operations are now expanding in that part of the world."