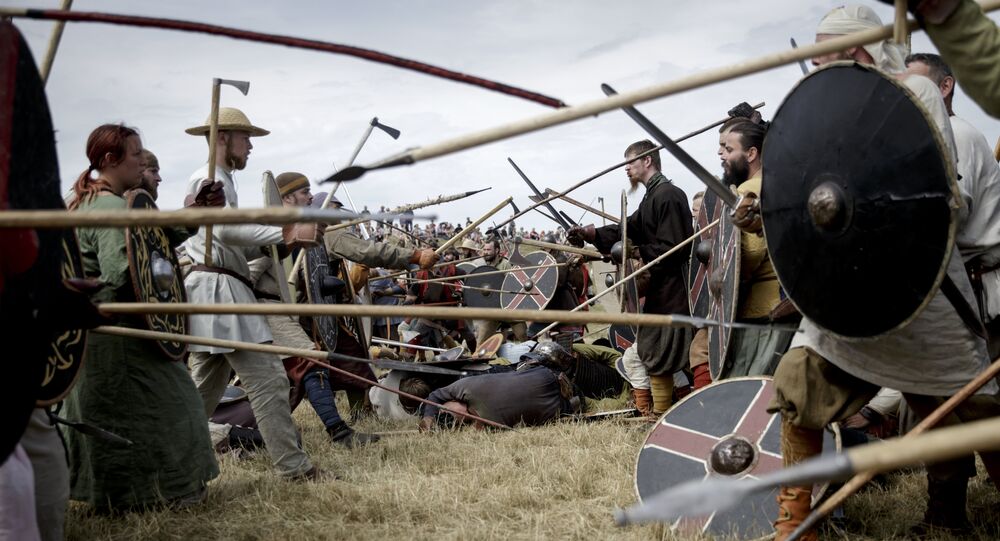 Danish archaeologists have discovered a previously unknown Viking ring fortress built in the late 10th century. Its unusual architecture has forced the scientists to marvel at how technologically advanced the society was that created it.

A massive, perfectly circular tenth-century fortress was recently identified at Borgring, south of Copenhagen in Denmark. According to the authors of a new study published in the Antiquity journal, this fortress complements a varied group of fortification structures in late Viking Age Denmark, part of a military network close to contemporaneous European ideas of military kingship and defense.

© Photo : Pixabay
The Grapes of Wrath: Danish Scientists Discover Secret Saga of Viking Vineyards
The discovery of the fortress was a real detective story, Soren Michael Sindbaek, an archaeologist at Aarhus University in Denmark and a co-author of the study, told the Science journal. "I've been working with these ring fortresses for quite some time, and I came to the conclusion that their distribution didn't make sense. There were gaps in the network of known fortresses where logically another fortress should have been," he said.

The first fortresses of this type were discovered in Denmark in the 1930s. They are military forts with a diameter of approximately 130-200 meters, surrounded by a ditch and fenced off from the outside world by a rampart and a wooden palisade fence.

© Sputnik / Igor Zharembo
Eat Like a Viking! Nordic Warrior Diet Craze Scours Scandinavia
Each of those fortresses was built according to a "standard." They had four entrances perpendicular to each other, two streets intersecting exactly in the middle of the fort, several shared households built for Vikings and other buildings. Similar fortifications were built across Scandinavia in the strategic areas, near the sea shore.

In total, archaeologists discovered five ring fortresses in different regions of Denmark and southern Sweden. The reason why the Vikings built these forts still remains a subject of debate among scientists, since the exact date of their construction is not yet known.

The strategic location of the fortresses supposedly built by King Harald Bluetooth (958 — 986), the first Christian ruler of Denmark and Norway, has worried Sindbaek for some time. According to the scientist, some of the fortifications were simply missing in those "obvious" places where they were supposed to be.

© Sputnik / Kirill Kallinikov
Vikings Storm Spanish Town in Spectacular Reenactment (VIDEO)
Guided by this idea, the archaeologist examined the 3D topographic maps of those regions of Denmark where they were supposed to be, as well as radar images of the upper layers of the soil where these "lost" fortresses could hide.

As a result, Sindbaek and his colleagues discovered traces of the existence of another similar fortress on Denmark's island Zealand in 2014. The Borgring fortress significantly differed from all the other circular castles of Harald Bluetooth, which is why the team spent almost three years on a full study to discover them.

In the fortress, scientists found carpentry instruments and other tools, used by the Vikings for patching holes in the rampart and the fence. The fortress was inhabited through several generations, unlike the rest of the fortifications, which were abandoned by the Vikings in one or two decades after the construction. According to scientists, this indicates the unusually important status of this castle. In addition, the fortress was partly burned in the course of the military conflict.

© AFP 2020 / MARIA CALLS
From Vikings' March in Scotland to Video Mapping in Moscow: Absolute Must-See World Festivals (VIDEOS)
Sindbaek and his colleagues also note that the ideal circular form of the Borgring fortress means it was more than just a military fortification, but a symbol of the power of the king, who subdued and united the lands of Denmark and sought to turn it into a civilized state.

If this theory is correct, there should be traces of four more similar castles hidden in Denmark. Scientists hope that further study of radar images will help them to find these fortifications and understand what role they played in the political life of Denmark more than a thousand years ago.