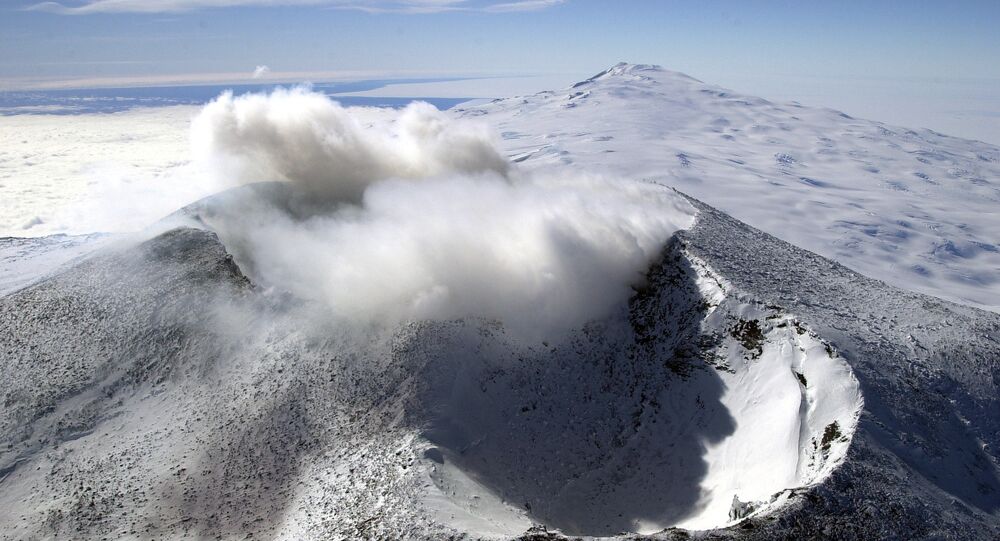 Geologists from Edinburgh University discovered almost a hundred previously unknown volcanoes beneath the ice cover of Antarctica. Dr. Robert Bingham, one of the authors of a new study, told Radio Sputnik whether the newly detected spitfire mountains are active and what impact the volcanic eruption would have for the continent.

A new study, performed by a team of Edinburgh University researchers, has revealed 178 cone-shaped structures in Antarctica. Hidden two kilometers below the ice, 138 of those structures are likely volcanoes, and 91 of the latter group are new to geologists. The height of the volcanoes ranges from a hundred meters up to almost four kilometers.

The scientists admit they know very little about the new volcanoes yet. Prior to the discovery, they were aware of only about fifty volcanoes on the continent.

"Before the study, what we knew about volcanoes in Antarctica was that they were at least located in two main locations. But we knew about those because they were sticking out from the ice," Dr. Robert Bingham, one of the paper's authors and a glacier expert at Edinburgh University, told Radio Sputnik.

The team analyzed a digital elevation model based on data gathered in previous surveys using ice-penetrating radars mounted on vehicles and aircraft. Scientists came up with a number of criteria to determine whether a certain geophysical structure might or might not be a volcano.

"So, what we've done in this study is actually use ice-penetrating radar data to look below the ice at the shape of the bed and assigned volcanic edifices… and the topography beneath the ice," Bingham said.

© CC0 / Piri Reis [Public domain], via Wikimedia Commons
The Mysterious Map Which Appears to Show Antarctica as Ice-Free
It is so far not immediately clear how many of the volcanoes are active. If any of the newly-discovered volcanoes began erupting, it would have a dramatic effect on melting the ice.

"The big issue with west Antarctica is whether it's stable or whether it's going to start thinning, responding to the climate change and ocean change," the expert noted. "And, with regards to these volcanoes, we already think it's happening at the moment. There is a potential 5 meters of global sea level rise locked up in west Antarctica," he added.

According to Bingham, the thinning of the ice is slow process but it's happening none the less. "The issue with volcanoes is whether they could actually speed up that process," the glacier expert said.

© REUTERS / NASA's Goddard Space Flight Center
Antarctica's Huge Breakaway Iceberg 'Unlikely' to Be Caused by Climate Change
The highest level of volcanic activity currently observed in the world is in regions that have only recently lost their glacial cover. "There is evidence from other parts of the world — Iceland is one, Alaska is another — where there has been thinning ice and ultimately the disappearing of large ice cover," he explained.

"The release of the pressure over the landscape has actually caused more volcanism," Bingham continued. "If we get more volcanism in west Antarctica, it's likely to generate more water and that's something that's likely to lead to the acceleration of the ice flow towards the oceans," he said.

"The question is whether these almost hundred volcanoes are predominantly active or predominantly dormant. And that's something we simply don't know at the moment and that's what we need to investigate," the author of the study said.

To answer the question whether active volcanism is a wide spread phenomenon across Antarctica or whether it is actually a fairy isolated phenomenon, scientists need to conduct a more detailed study of these volcanic edifices.

© CC BY 2.0 / Christopher Michel / Iceberg Graveyard
Here Today, Gone Tomorrow: Antarctica's Melting Beauty
16
"If we want to find out whether [these volcanoes] are active or not, we need to go to some of these places and investigate by [measuring vibrations], whether there is any significant activity going on," Bingham told Sputnik.

"I think the analogy is provided by a situation in east Africa where we have a hugely volcanic region — geologists will all know this is the East African Rift system. Big mountains like Kilimanjaro and Mount Kenya are large volcanoes that developed in a very similar geological context," he claimed.

"Antarctica used to be joined to Africa many-many years ago, and I think the same process is going on in west Antarctica in terms of plate tectonics — which is when the land very slowly moves apart," the expert continued.

© Wikipedia
Chill, Bro: Arctic Melting at Alarming Rate While Antarctica Stays Cool
Scientists also suspect there are even more volcanoes on the bed of the sea that lies under the Ross Ice Shelf, but it will take time to find out.

"On one level, we know the depth [of Antarctica] better than we ever have done before. But on another level, we don't know fully the shape of the Antarctic bed at all. In some areas we simply have no data whatsoever," Bingham said, adding that people have been trying to see through the ice for 40 years since radar was first developed.

"I would not be surprised if there are other surprises to be discovered under the ice," the scientist concluded.