The peculiar cliff formation known as the Pulpit rock is one of Norway's foremost tourist attractions drawing thousands of tourists. Notwithstanding its rising popularity, concerns have been raised that Norway might lose some of its most iconic sights.

The stunning rock is known to have a gap, which has been a perennial cause of concern since the 1930s. Earlier this year, the crack was reported to have widened by 2-3 millimeters, which marked the first recorded change in over two decades, Norwegian national broadcaster NRK reported.

Consequently, the Geological Survey of Norway (NGU) is poised to increase the monitoring of the famous attraction by scanning the cliff formation from various angles and flying over it with a helicopter to obtain high-resolution photographs. Furthermore, 3D models of the surface will be made by the Norwegian University of Science and Technology (NTNU) to make a stability analysis.

👣 May, 2015 Preikestolen, Rogaland county, Norway 🇳🇴 Fancy a #hike? This one is definitely worth doing! The views from the 604 metres cliff on the Lysefjorden below are amazing. Just an easy hike, so even if you're not feeling that fit 😉 this is the way to go! www.mysterra.co.uk #lysefjorden #preikestolen #preikestolennorway #norway #stavanger #fjord #views #travel #travelblogger #travelphotography #travelbug #MysTerra

Overhanging Lysefjord by an impressive 604 meters, the Pulpit Rock has been recurring as one of the world's most scenic views according to CNN, the Lonely Planet and many others. Atop the cliff, there is an almost flat plateau of approximately 25 square meters. Discovered as a tourist attraction in 1900, the Pulpit rock or Preikestolen has attracted hundreds of thousands of selfie-tourists and base jumpers in recent years.

#throwback into one of the hiking days in #norway. Beautiful view over the #lysefjord from the #preikestolen area. #stavanger #fjord #fjordlife #ontheedge #pulpitrock

By the end of 2017 alone, 300,000 tourists are expected to have climbed upon the scenic cliff. Between September 20 and 28, however, the Pulpit rock won't be accessible, as scenes for "Mission Impossible 6" with Tom Cruise will be shot on the location. 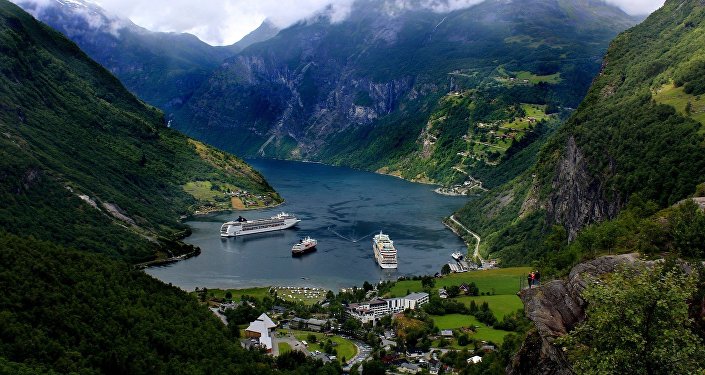 The fanciful phallic rock named Trollpikken or Troll's Penis, which was anticipated to become an heir to yet another one of Norway's iconic cliffs with a fjord view named Troll's Tongue, collapsed in late June due to suspected vandalism. In a subsequent crowdfunding campaign, hundreds of Norwegians pitched in to restore the protruding rock to its former erect glory. By mid-July, however, the Troll's Penis was already up and kicking again. Since then, the suggestive rock has already attracted thousands of tourists.

The growing popularity of Norway's natural sights has spurred the country into mulling a tourist tax to help local communities experiencing an onslaught of visitors withstand the pressure on the environment and the infrastructure.

In a tourism report issued this spring, however, the government argued that Norway already was a very expensive destination and that an additional tourist tax would only hurt the competitiveness of the national tourism industry.