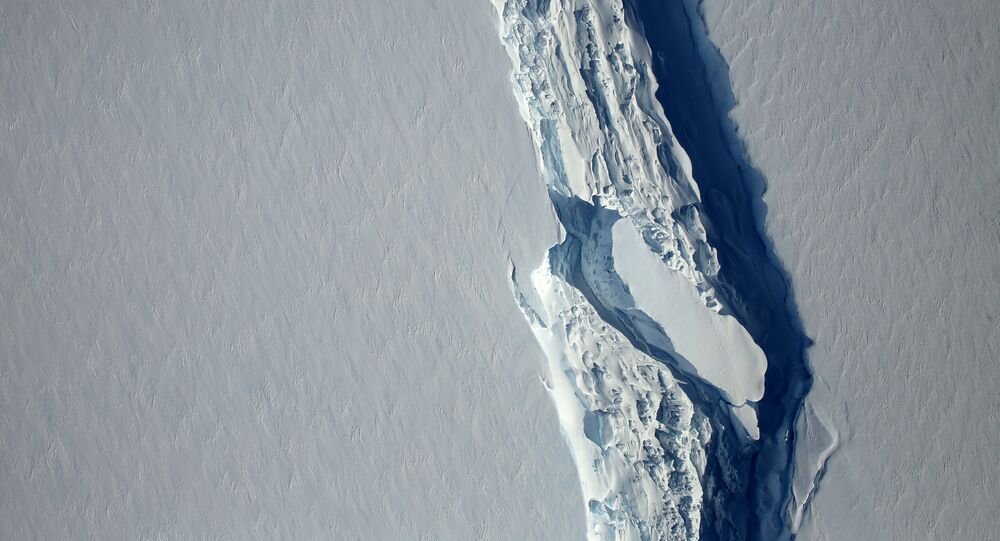 The recent breaking off of one of the world's biggest-ever icebergs from an Antarctica ice shelf is an uncommon event which is unlikely to be caused by a warming climate, Antarctica expert Professor Martin Siegert told Sputnik.

© REUTERS / Courtesy ESA
Colossal Loss: Iceberg the Size of Wales Breaks Off an Ice Shelf in Antarctica
A gigantic iceberg measuring twice the size of Luxembourg broke off the Larsen C Ice Shelf in Antarctica earlier this week. The iceberg, which has been dubbed A68, is one of the biggest ever. It measures 5,800 square km in length and weighs more than a trillion tons.

Scientists at the Swansea University-led Midas project had been monitoring the ice for years, following the collapse of the Larsen A ice shelf in 1995 and the sudden break-up of the Larsen B shelf in 2002. By June, the crack in the ice had grown even wider and increased its length to over 200 km, leaving the iceberg hanging on by a thread of ice just 4.5 km wide.

An ice shelf is a large region of floating ice, several hundred meters thick, fed by ice flowing from the grounded ice sheet upstream of it.

Antarctica expert Professor Martin Siegert, Co-Director of Imperial College London's Grantham Institute, told Sputnik that icebergs calving from the front of the ice shelves happen regularly, due mostly to flexing of the floating shelf under the tides of the ocean.

To give a sense of the true dimensions of the Larsen C iceberg, here's an animation based on real data, with something familiar for scale pic.twitter.com/OdQA07qhBb

​​"Very big icebergs form because of weaknesses in the floating ice shelf, which show as cracks getting longer through time. The weaknesses themselves can form as the floating ice flows over a small grounding point, leading to cracks and crevasses. Sometimes these cracks get larger, and once they start they effectively cut the ice shelf into two parts, and the zone that connects them gets smaller and less able to hold the ice together," Siegert explained.

"There are many signs that climate change is happening in Antarctica, e.g. ice sheet thinning, and water on the surface of ice shelves, and we are concerned about the vulnerability of ice-sheet/ice-shelf systems. BUT this large iceberg is likely more of a natural and unusual (but not unexpected) phenomenon than a problem caused by climate change."

"The iceberg will now slowly drift away, under the surface and subsurface currents, and we will track it for the coming years and decades as it slowly breaks up and moves along."

The iceberg could present a danger for shipping if it moves north into the Southern Ocean, but most icebergs stay close to the continent, Siegert said.

"We have excellent satellites that can keep a close eye on its progress and size, and the icebergs that will form from it, over the next few months and years."