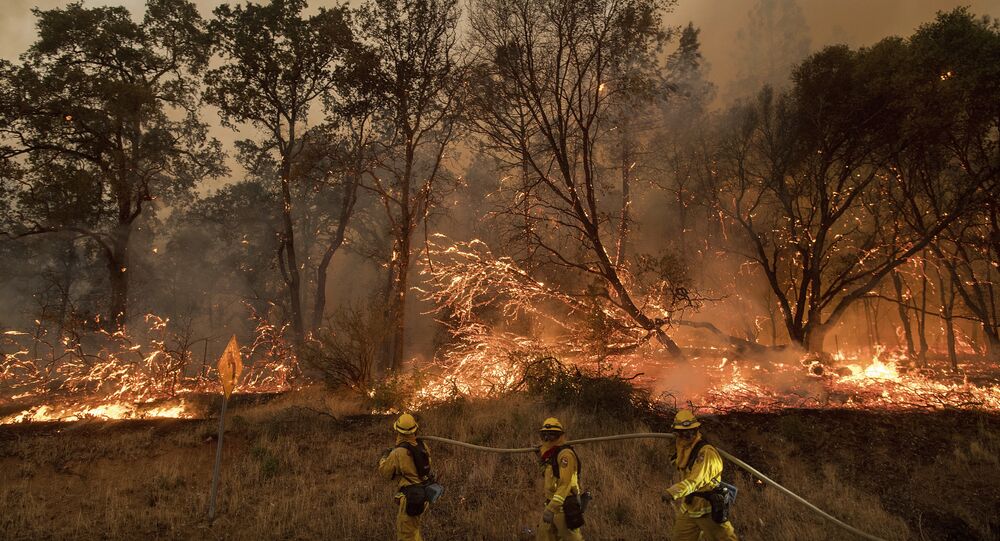 8,000 Californians have been evacuated from their homes as no less than 14 wildfires bring ruin to the forests of the West Coast.

Santa Barbara County has been the epicenter of the damage, with two large blazes breaking out on the northern and southern ends of the county. The Alamo fire in the north destroyed 37 square miles of forest as of Sunday evening, causing thousands of firefighters to converge and attempt to control the flames. The Whittier fire in the south has caused over 3,5000 evacuations, destroying at least 20 buildings.

#WhittierFire still on going in Santa Barbara Co., CA. This fire has burned 10,823 acres and 5% contained as of early Monday morning. #CAwx pic.twitter.com/gfgJq75nea

​A third blaze, the Stone fire, occurred in neighboring San Luis Obispo County on Sunday afternoon. It is much smaller, having destroyed only about half a square mile of land. The Winters Fire in Yolo County, Northern California has been almost entirely contained after destroying 3.5 square miles since Thursday.

​The Wall fire in Butte County, on the other side of the state from Santa Barbara, has devastated eight square miles and destroyed 10 structures. The fire broke out in a fairly remote section of the county, about 60 miles north of the city of Sacramento.

​4,000 residents of Butte County were evacuated, and four injuries have been reported. Butte County is also home to the Oroville Dam, which sprung a leak in February and prompted 180,000 people to be temporarily uprooted from their homes.

​The fire began on Saturday afternoon and spread quickly, causing widespread damage. Favorable wind conditions helped to contain the fire's spread, moving the blaze in the direction of forests around the Santa Ynez Mountains, which were badly damaged by wildfires in past years.

​"It will act as a good buffer," said Jim Harris, deputy fire chief for Los Padres National Forest, to the LA Times. He added that additional fire crews equipped with multi-terrain fire vehicles would be essential in defeating the blazes.

​Governor Jerry Brown has declared a state of emergency and activated an emergency fund to bolster firefighting efforts. In addition to the fires listed above, nine additional smaller fires have been reported throughout the Golden State.

​Wildfires have also broken out in Colorado and British Columbia, with the latter being of unprecedented size according to Rob Schweizer, the fire manager in the city of Kamloops, British Columbia's fifth largest. "We probably haven't seen this sort of activity that involves so many residences and people in the history of the province of B.C.," he told ABC.

Fire Crews Report Progress In California And Other Parts Of The West https://t.co/e3H7wlP7og pic.twitter.com/Nk9PSUrMZ9

Death Toll in Forest Fires in Portugal Rises to 62 - Reports