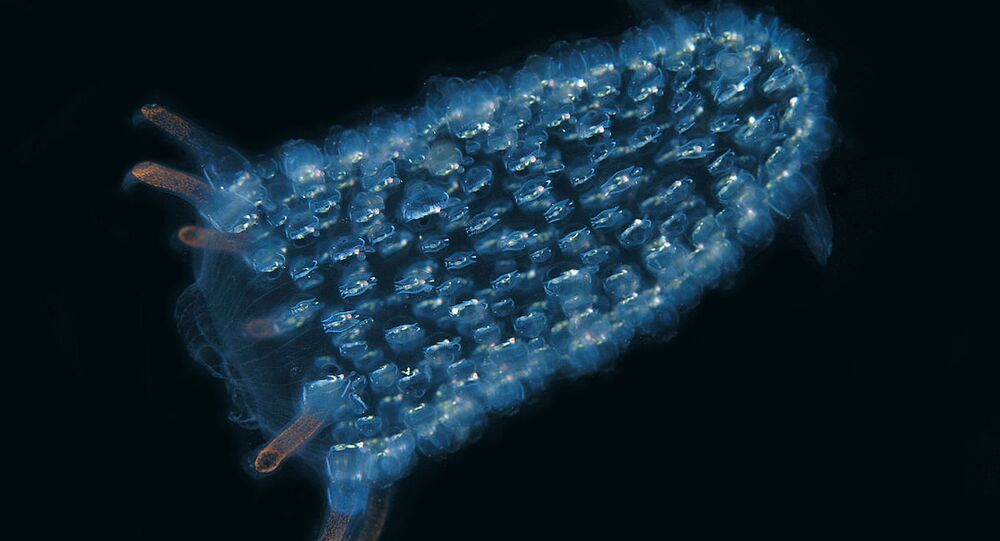 Colonies of fluorescent tropical animals, detected recently off the west coast of the continental US, are rapidly expanding for unknown reasons. These creatures are social as they can exchange light signals with each other and in between their colonies, but overall there is little known about them, and what happens next is a mystery, too.

© REUTERS / Courtesy of WikiLeaks
Embassy Cat: Assange's Mysterious Feline Companion
11
Kristian Rouz — Scientists have encountered a bizarre phenomenon in the waters along the US West Coast they are working on finding an explanation for. Despite lower water temperatures in the first half of this year, glowing tropical sea animals called pyrosomes, or "fire bodies", have appeared in enormous quantities off the coast of Oregon and Alaska, primarily, which might have serious consequences for the sea life in the region.

Millions of glowing cucumber-shaped pyrosomes, planktonic sea creatures that can reach up to 60 cm, or two feet, in length, have infested the waters of the US West Coast, the US National Oceanic and Atmospheric Administration (NOAA) said. It is unclear what caused such massive reproduction of this species this year, as the waters of the Pacific Ocean near the US have cooled in the past six months due to colder weather after two years of warmer water.

The pyrosomes are typically found in the waters of Ivory Coast, the Mediterranean, and off the coasts of Australia and Florida. As tropical animals, these tubular-shaped glowing creatures thrive in a warmer water environment, and were first spotted in the West Coast region in 2015, when several months of hot weather contributed to an increase in the water temperature.

"Pyrosomes have become the center of attention, with reports of them washing up on beaches, clogging up fishing and research gear, and causing a general sense of befuddlement for people who have been frequenting these waters for many years," Hilarie Sorensen of NOAA wrote, "but to our knowledge, have never seen these creatures in such high density off of the Oregon coast before."

© Photo : Courtesy of Andrey Borodovsky / sbras.info
Dragons of Siberia: Scientists Reveal Mythical Creatures Once Lived in Russia Too
The two years of unprecedentedly warm water off the US West Coast ended this spring, with the overall situation getting back to normal. The sea life in the region is dominated by salmon and sea lions, who had had hard times in the warmer water environment, but the populations of salmon have started to increase earlier this year, and sea lions stopped washing ashore as well.

The increase in the amounts of pyrosomes would be a characteristic of the rising water temperatures, but it occurred under quite the opposite circumstances. Pyrosomes first appeared in large quantities in spring, and their amount has only continued to grow despite the colder water and the overall return to normalcy in sea life in the West Coast region. They are the only biological anomaly currently observed in the region.

The pyrosomes are currently concentrated in particularly large amounts 40-150 miles off the coast. Their main source of nutrition is plankton, but they also act as parasites, attacking sea mammals such as dolphins and whales, as well as fish. Finding millions of pyrosomes fairly close to the shore is also unusual — typically, this species inhabits tropical waters far from land.

"When I first saw it I didn't even know what it was… As an example we had a crew out last month where they did a five minute tow and they collected about 60,000 of them," Rick Brodeur of the Hatfield Marine Science Center said.

A pyrosome looks like a transparent jelly-textured cucumber that inhabits higher layers of tropical waters. They live as colonies of hundreds to thousands individual zooids, and they appear as fluorescent entities, free-floating in the ocean.

"It's just unbelievable how many of them there are," Brodeur said.

There are several issues with the pyrosome bloom off the West Coast, which might pose serious threats to the region's sea ecosystem. First of all, it is unknown what such huge amounts of pyrosomes have been feeding on. Even if there is enough plankton to support the expansion of their colonies here, other plankton-eating species might be endangered or forced out of the region by this phenomenon.

"These guys probably consume a lot of food-they tend to eat very fine particles-but they have to consume a lot to reach those densities," Brodeur said.

Another problem is, when the older zooids start to die of natural causes, the decomposition of their bodies will produce the emission of carbon dioxide into the waters immediately close to the shore of the US West Coast. Given the massive quantities of glowing cukes in the region, the volumes of CO2 produced by their decomposing bodies will significantly after the oxygen balance in the water, challenging the existence of fish and other forms of life.

© Photo : Youtube/ oceanexplorergov
Who Lives in a Pineapple Under the Sea? Mysterious Mariana Trench Reveals Secrets
It is also unknown whether the pyrosomes will stop multiplying further after their colonies have achieved a certain size, or they will keep growing in numbers. The scientists do not know whether any form of life eats pyrosomes — they do not appear to have any natural enemies. Pyrosomes have been found in the stomachs of sablefish and chinooks, but it is unclear whether those zooids were targeted as food or got swallowed by accident.

Pyrosome colonies have demonstrated strange social habits. They glow in response to touch, but zooids also emit light in response to light received from other individuals. Entire separate colonies of pyrosomes are known to exchange light signals between them.

The scientists are currently monitoring the situation, but it is almost certain that should the expansion of the pyrosome colonies continue, disastrous consequences for the sea life in the region will be imminent. It is also unknown whether the pyrosomes can in any way affect the infrastructure and overall lives of humans in the region, as being close to the shore, they are clogging fishing nets, and might jam water supply inlets, among other things.