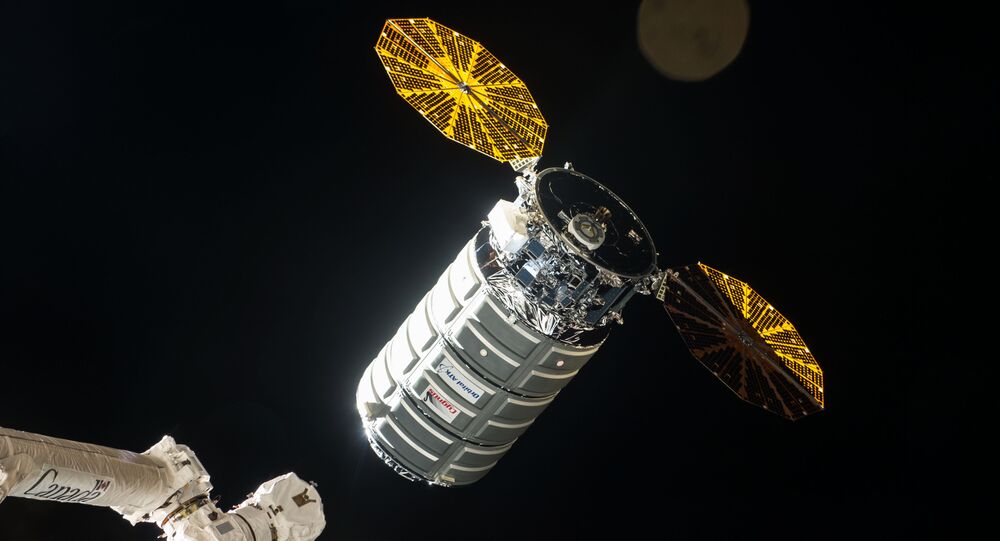 The Cygnus cargo ship has just left the International Space Station to embark on the next leg of its mission – the biggest fire experiment ever carried out in space.

© Photo : Roscosmos
Alien Microorganisms Traverse Space on ISS Panels
The Cygnus cargo ship, which joined the International Space Station on April 22, was released from the satellite on Sunday after delivering a 3,500 kg cargo filled with experiments, food and supplies for the crew.

However, the successful supply mission is not the end of Cygnus' work. The cargo ship is going to carry out several valuable scientific experiments before it is scheduled to eventually burn up in the Earth's atmosphere on June 11.

The most eye-catching of those is NASA's Spacecraft Fire Experiment-III (Saffire-III), which will use the empty spacecraft to start a fire and study it in space. Scientists want to find out how fires spread in microgravity, in order to better understand how to prevent fires aboard spacecraft and design fire-resistant materials for space.

The Saffire-III experiment is the third time empty Cygnus resupply vehicles have been used to investigate the behavior of fire in space. A large piece of fabric will be set on fire inside Cygnus, burning for about 20 minutes, during which time scientists will measure how the flame spreads at different rates of air flow.

© Photo : Pixabay
Russian Scientist Patents Method to Create Atmosphere on Mars
After the fire experiment, Cygnus will carry out its final scientific task, the deployment of NanoRacks-LEMUR-2 satellites, part of a remote sensing satellite constellation that provides global ship tracking and weather monitoring.

Cygnus, which was produced by US aerospace manufacturer Orbital ATK, will deploy the satellites on behalf of Spire Global, a US company specializing in data gathered from a network of small satellites.

Once it has fulfilled its final mission, Cygnus will be commanded to re-enter the Earth's atmosphere on June 11 over the Pacific Ocean. On re-entry, the spacecraft will burn up and any remains will fall into the ocean.