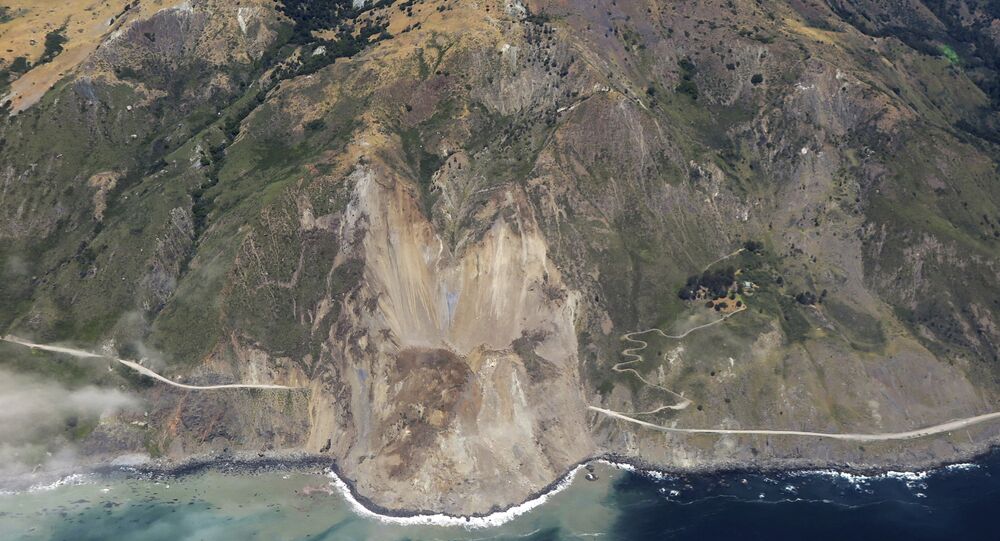 A cataclysmic landslide in California has dropped more than 1 million tons of earth into the Pacific Ocean, burying a portion of Highway 1 under 40 feet of rock and dirt. The mudslide has been called the largest in California state history.

After five long years of drought, the Golden State was hit with one of its rainiest and snowiest winters on record, causing dams to overflow and 30-foot waves to pound the shore since December.

I can't get this utter collapse of a part of Big Sur out of my mind. Via @ccmasteller @USGS #LANDSLIDE pic.twitter.com/XgEdGA9Uc0

​Though winter is long over, its effects are lingering.The weekend's landslide is only the latest in a long series of natural disasters that have plagued California in recent months. In total, the recent natural disasters have caused $1 billion in highway damages across the state according to the California Department of Transportation (CDOT).

The landslide occurred in Big Sur, a coastal region of California. Lightly populated and remote, it is known for its state parks and rugged beauty. One of the most isolated parts of the continental United States due to its mountainous terrain, Big Sur's central tether to the rest of civilization is Highway 1, constructed in the 1930s.

​The highway is now closed, as the mudslide has left a quarter-mile of the road buried and the surrounding area unstable. This endangers the tourist trade for Big Sur's multiple small communities, many of which rely on visitors seeking redwood trees and pristine beaches.

"We haven't been able to go up there and assess. It's still moving," said Susana Cruz, a CDOT spokeswoman, said in a statement. "We have geologists and engineers who are going to check it out this week to see how do we pick up the pieces."

​The most recent event was the result of increased erosion due to the heavy rains, but it's been a rough season for Big Sur overall. Bridges and highways have been shut down, campgrounds and resorts have been closed, and in some cases people have had to be helicoptered out of the region.

"This type of thing may become more frequent, but Big Sur has its own unique geology," said Dan Carl, a district director for the California Coastal Commission. "A lot of Big Sur is moving; you just don't see it."

Sad to hear of massive landslide at Big Sur on the #PacificCoastHighway in California — was so beautiful to drive it last summer pic.twitter.com/3uSPS1IdfA

Highway 1 had already been closed before the mudslide when authorities discovered that the pavement was buckling and the road was covered in debris from earlier, smaller slides. Work crews were evacuated when they realized how unstable the region was.

Nearby Pfeiffer Canyon Bridge, also on Highway 1, had to be demolished after it was badly damaged during storms in January and February. A new bridge is scheduled to open in September.

At Least 3 People Killed in Landslide in Southeastern China