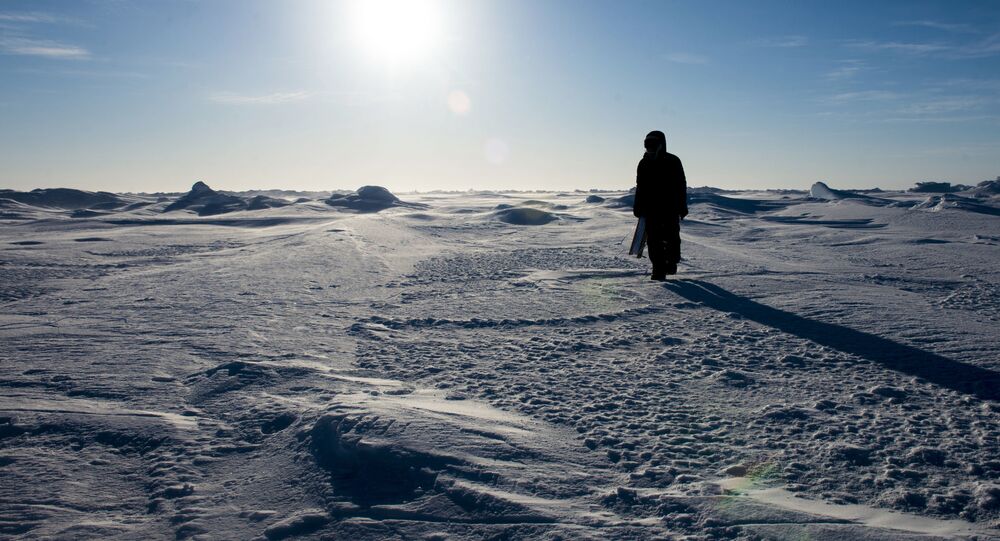 The Russian environment monitoring service's head said that cooperation with the United States continues despite sanctions.

FAIRBANKS (Sputnik) — Russia's Federal Service for Hydrometeorology and Environmental Monitoring (Rosgidromet) is hopeful that a newly signed agreement between the Arctic nations on enhancing their scientific cooperation in the region will provide new opportunities for US-Russia collaboration, Rosgidromet head Alexander Frolov told Sputnik.

"Despite the rather complicated political situation, our scientific cooperation continues. I hope that the agreement signed Thursday will certainly open new opportunities, give new incentives. First of all, among the traditional methods of research, the policy of openness in data, knowledge, people and technology exchange is very important," Frolov said.

Frolov noted that Rosgidromet and the Russian Academy of Sciences are successfully cooperating with US National Science Foundation.

"We have at least two active projects, although there were more of them before," he explained. "The Tiksi Hydrometeorological Observatory, a very advance research observatory allowing to research climate change, the composition of the atmosphere, the chemical composition that affects these processes, ice, and many other processes."

Frolov added that Russia and the US universities conduct joint oceanographic studies in the Laptev Sea, which are "quite successful."

The agreement was negotiated under the auspices of the Arctic Council, and aims to allow scientists and their data "to flow more freely across international boundaries within the Arctic," according to US Deputy Assistant Secretary at the Bureau of Oceans, Environment and Science David Balton.

Rosgidromet Hopes for Resumption of Direct Cooperation With US NOAA

Rosgidromet is hopeful that a direct collaboration with the US National Oceanic and Atmospheric Administration (NOAA) will be revived under Finland's chairmanship in the Arctic Council.

"Since Finland declared meteorological cooperation to be one of the four priorities during its two-year chairmanship, I hope that we will be able to resume direct cooperation with NOAA," Frolov said.

Finland took over the rotating Arctic Council chairmanship from the United States on Thursday. Helsinki assumed the chairmanship for the 2017-2019 period.

Cooperation With US Unaffected by Anti-Russia Sanctions

Anti-Russia sanctions imposed by the West do not impact the cooperation between Rosgidromet and the United States, Frolov told Sputnik.

"The sanctions do not affect us. We have no restrictions in our area, which is research, expansion of monitoring systems, monitoring and assessment," he stated.

Frolov explained that most importantly there are no obstacles in this sphere because it is important for everyone to know what factors influence the environment.

"It's not just the climate, of course. Human activity has more and more impact on the environment. There are many problems in the Arctic," he noted. "The Arctic is currently the most rapidly changing region in the world, both from the point of view of natural systems and due to the growing activity of people."

Frolov added that there were different types of economic projects and therefore it was "necessary to jointly research the causes and, most importantly, give recommendations based on scientific knowledge: what to do, and what will happen."

In 2014, the United States and the European Union imposed sanctions against Moscow after a referendum in Crimea in which a vast majority of its residents decided to reunite with Russia. Western states have also accused Russia of meddling in Ukraine’s internal affairs, allegations that Moscow repeatedly denied.

European Climate Center to Be Established in Saint Petersburg

One of the three climate centers being created by the World Meteorological Organization (WMO) will be located in Russia's second-largest city of St. Petersburg.

"A number of new projects are being developed under the auspices of WMO, including the year of polar forecasting, the global surveillance system for the geosphere. The project of creating three climate centers is almost at its final stage. The European Climate Center will be located in St. Petersburg," Frolov said.

"Another one will be US-Canada, with Canada being the leading center for North America and the third will be the Nordic countries, Denmark, in Norway," he added.

Rosgidromet's head noted that the Institute of the Arctic and Antarctic will be carrying out the center's functions.

"This is almost agreed," he said. "This goal is to provide scientific knowledge and information, primarily on the ice, as well as forecasts, including for navigation in the Northern Sea Route and in adjacent areas. The centers will be working on and solving a number of other issues."

Russia and the United States have discussed expanding collaboration on various matters including oceanographic and permafrost research.

"We discussed these topics. We have about ten projects, ranging from oceanographic to permafrost research. That is a very wide set of research matters: the atmosphere, the ocean, the ice, the frozen soils," Frolov said.

Frolov stressed that all these issues were very important for the Arctic, because seasonal melting already led to a number of serious consequences, including economic losses.

Besides, the head of Rosgidromet, noted that the period of the Arctic's availability is getting shorter.

"On the one hand, from the sea point of view, the Arctic opens, but from the point of view of terrestrial infrastructures, it is on the contrary closes," Frolov explained. "So, here there are also issues that we can work on together."