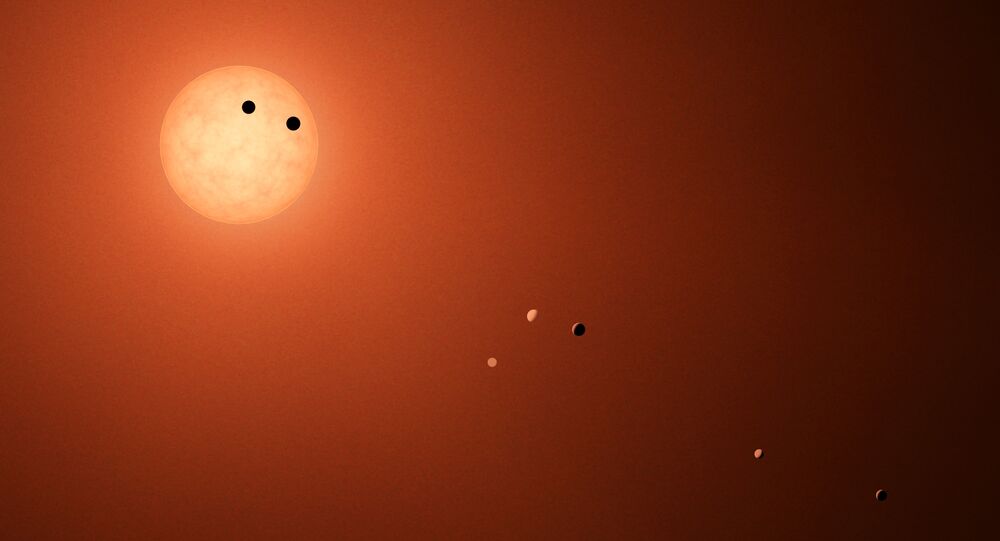 Scientists seem to have solved one of the conundrums presented by the TRAPPIST-1 star system, where planets remain in orbit thanks to a "resonant chain," a rhythmic pattern of orbit that researchers have managed to put to music.

In February, NASA announced the discovery of at least seven Earth- and Venus-sized exoplanets orbiting TRAPPIST-1, an ultra-cool dwarf star only slightly larger than Jupiter, located approximately 40 light-years (378.4 trillion km) away from Earth in the constellation Aquarius.

Scientists are divided on whether any of the rocky planets present the conditions for life. According to 3D climate modelling by Eric Wolf from the Laboratory for Atmospheric and Space Physics at the University of Colorado [US], only the middle planet lies in the so-called "Goldilocks zone," of orbit, an area where it is neither too hot or nor too cold to support liquid water.

Other scientists think that because the seven planets in TRAPPIST-1 are very close together, it could be an example of panspermia, a process by which life begins on one planet and then spreads to others through the transfer of rocky material.

The theoretical instability of the TRAPPIST-1 system presents another major conundrum for scientists. The planets orbit TRAPPIST-1, which is 3-8 billion years old, at a distance closer than that of Mercury's orbit of the Sun. According to computer simulations, the system should be unstable because the orbits of the planets become more elliptical and start crashing into each other after just 500,000 years.

© NASA . JPL-Caltech
Is It a Planet? A Star? Scientists Finally Pin Down 'Brown Dwarf' in Pisces
According to a paper published in the Astrophysical Journal Letters on Wednesday by researchers from the University of Toronto, this is due to a phenomenon called a "resonant chain," which stabilizes the planet system.

"It was a mystery as to why it was stable, because our simulations showed that it would quickly disintegrate in half a million years, which is an astronomical blink of an eye," Matt Russo, a post-doctoral researcher at the Canadian Institute for Theoretical Astrophysics who worked on the study, told Radio Sputnik.

Russo said that resonant chains have been observed before, but not on this scale.

"Astronomers knew the planets were in this resonant chain, it's a very special configuration, but we haven't seen any this big, where every planet is part of the resonant chain."

In a resonant chain, the gravitational fields of the planets work in tandem to keep each orbit stable and circular. Their orbits have a rhythmic repeating pattern that forms a ratio of whole numbers.

© NASA . JPL-Caltech/Space Science Institute
Colossal Titans Far Away: Two Unlikely Saturn-Like Exoplanets Discovered
In the case of TRAPPIST-1, scientists think that the resonant chain arose from disk migration, which probably occurred as protoplanetary disks of dust and gas slowly migrated toward one another.

"Resonances can either help you or hurt you. For instance, Neptune and Pluto are in a three to two resonance, which is a good thing for Pluto but because they're in this rhythmic repeating pattern they are never at the same place at the same time," Russo explained.

"But resonances can also hurt you, as in the gaps in the asteroid belt when material has been cleared. So, it turns out it's not enough to have these whole-number period ratios, they also have to have these fine-tuned values of their other parameters, such as their eccentricity, how circular their orbits are, for instance."

"So, to solve that problem Dan [Tamayo, the lead author of the paper] rolled the clock back and simulated how the system would have formed and evolved early on. Early on, these planets can actually move in their gas disk, where they are forming, and they can be slid into these resonances and have all of their parameters finely tuned."

The researchers have even turned the rhythmic pattern of resonance into music.

"I'm a musician, so when I saw the resonant pattern I knew it would be rhythmic and I knew it would be harmonic, I knew the notes would sound good. So I asked him if he had any simulations of the system I could use and he said he had thousands ready to go, let's collaborate, and we created the work that you heard."

The discovery of TRAPPIST-1 is "incredibly exciting" and could herald the start of more discoveries of cooler, less bright stars, Russo said.

"Only recently have we started looking at these cool, red dwarf stars. Out of the first few dozen that they studied they found TRAPPIST-1, which is like picking up a few dozen rocks and one of them happens to be solid diamond. So, it's a very beautiful system, this is seven planets and every one's in a resonant chain."

"We think this process that created this resonant chain should happen with all planetary systems but when we look at them we don't see very many in these resonant systems, which means that maybe their earlier disks were kind of turbulent and noisy and they were prevented from staying in resonance. So, one idea is that the Trappist system just happened to have a really calm birth disk, and it let them find each other in resonance and stay in resonance."