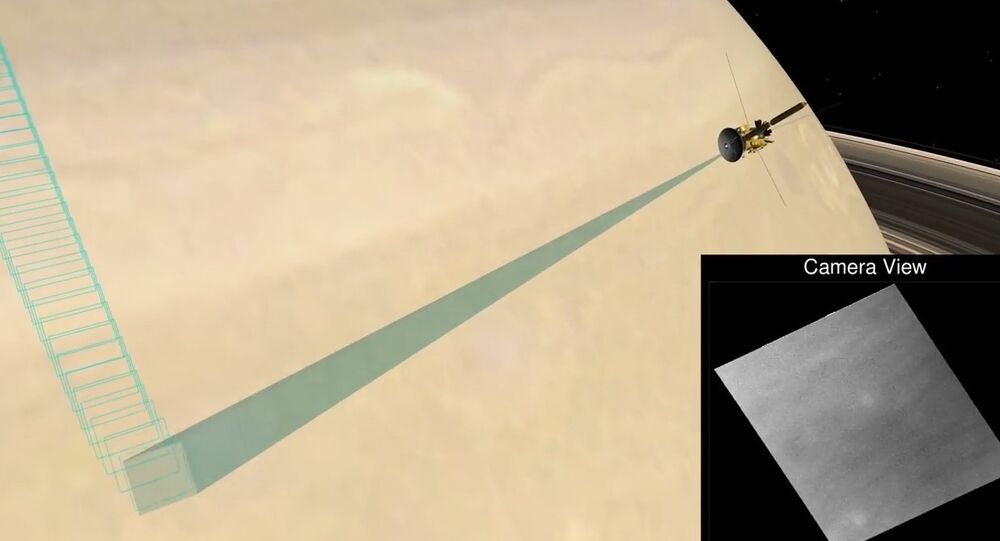 The Cassini spacecraft has recorded a video of its first dive past Saturn on April 26, in which it swooped between the planet and its rings.

The Cassini spacecraft, which is winding up its exploratory mission to the solar system's sixth planet, has snapped an extraordinary new video of Saturn as it dived between the planet and its rings on April 26.

"The images from the first pass were great, but we were conservative with the camera settings. We plan to make updates to our observations for a similar opportunity on June 28 that we think will result in even better views," Andrew Ingersoll, a member of the Cassini imaging team based at Caltech, said in a press release.

Kunio Sayanagi, an associate of the Cassini imaging team based at Hampton University in Virginia, said that the sharp contours of the planet's surface were a surprise.

"I was surprised to see so many sharp edges along the hexagon's outer boundary and the eye-wall of the polar vortex."

"Something must be keeping different latitudes from mixing to maintain those edges," Sayanagi added.

© NASA .
Tried AliExpress? NASA Running Out of Space Suits for ISS Missions
A joint mission between NASA, the European Space Agency and the Italian space agency, Agenzia Spaziale Italiana, the Cassini mission will end in September 2017 after 13 years in orbit around Saturn.

On April 22 it began the final stage of its mission, a set of several plunges between the planet and the inner edge of its rings in order to send scientists information about Saturn's gravitational and magnetic fields and the composition of its rings and clouds.

After it has completed the mission, Cassini will maneuver into the upper atmosphere of the gas giant planet and burn up like a meteor.

Scientists think that two of Saturn's moons, the icy Enceladus and methane-rich Titan, might be able to host some form of life. Cassini's fiery end removes any chance of the probe someday colliding with a moon and contaminating it with microbes from Earth that managed to survive the trip across the solar system.