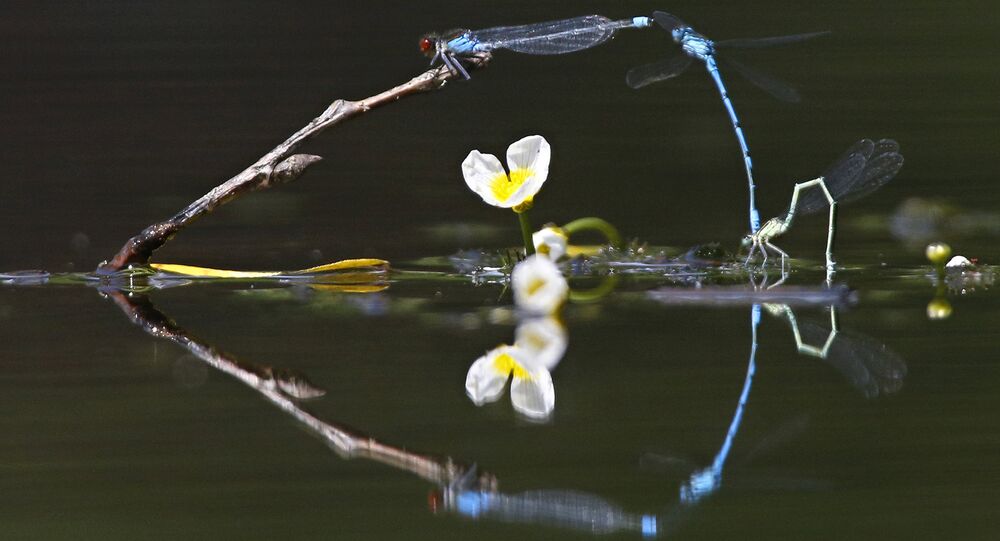 We know the feeling.

A new study shows that when lady dragonflies aren't in the mood, they go as far as to fake their own deaths, plummeting from the air and lying motionless on the ground when males they're not interested in pester them for sex.

Rassim Khelifa, a zoologist with the University of Zurich, first noticed the behavior in the Swiss Alps in 2015, when he watched a moorland hawker dragonfly (Aeshna juncea) dive to the ground, pursued by a male of the species. The female lay there until the male flew away; then took off herself.

"I was surprised," he said, having not witnessed such behavior in 10 years of studying the creatures. (Had he hung out at a few local bars, however, he might have seen something similar.)

It is rare for animals to fake their own deaths, and the first time the dramatic escape technique has been documented in odonates, the order of carnivorous insects that includes dragonflies and damselflies, to avoid mating.

In a study published in the journal Ecology this week, Khelifa describes the process. "[W]hile I was waiting at a pond near Arosa, at about 2,000 meter elevation, I witnessed a dragonﬂy dive to the ground while being pursued by another dragonﬂy… the individual that crashed was a female, and… she was lying motionless and upside down on the ground."

"Upside down is an atypical posture for a dragonﬂy," he continued. "The male hovered above the female for a couple seconds and then left. I expected that the female could be unconscious or even dead after her crash landing, but she surprised me by ﬂying away quickly as I approached. The question arose: Did she just trick that male? Did she fake death to avoid male harassment? If so, this would be the ﬁrst record of sexual death feigning in odonates."

The researcher went on to document dozens of instances of playing dead over the next few months. He watched female dragonflies arrive at ponds to mate — a process that begins with a male intercepting a female in the air. He found that the more males there were, the more likely the fakeouts were to occur, and that the behavior seemed to happen after a female had mated, while she was trying to lay eggs. Mating after eggs have been fertilized can be damaging to the females' reproductive systems, the New Scientist points out.

Khelifa found that more than 77 percent of the time, the ruse was successful and the male flew away.

Playing dead to avoid predators has been observed in this species, Khelifa noted. "It's likely that females expanded its use to overcome male coercion," he said, according to New Scientist. The trick seems to be common among the females of the species.

"Sexual death feigning is one of the rarest behaviors in nature, and due to its scarcity, it has received little attention in behavioral ecology," Khelifa wrote in the study. "Currently, it is restricted only to arthropods. It would be interesting to know whether this scarcity is true or just an artifact related to the lack of behavioral investigations or difﬁculty in detecting this behavior."

Sexual death-feigning is known in only four other species: two species of robber fly, the European mantis and a type of spider, he pointed out.