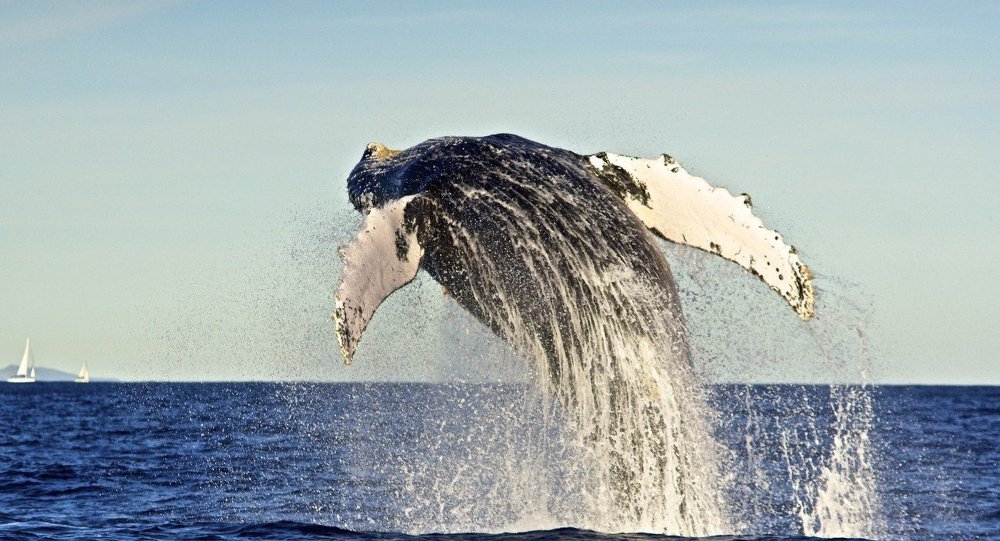 A new study by the British Ecological Society has found that humpback whales "whisper" to their mothers, which they say may be a sign of high intelligence.

To conduct their research, the scientists attached recording devices to humpback calves, something that had never been done before. The recorders used suction cups to stick the devices to the calves’ skin. They would stay on for approximately one day before falling off.

“Vocalisations between mother and calf, which included very weak tonal and grunting sounds, were produced more frequently during active dives than suckling dives, suggesting that mechanical stimuli rather than acoustic cues are used to initiate nursing,” the researchers wrote in their report, which was published in Functional Ecology on Tuesday.

© AP Photo / Dima Gavrysh
Outrage After Japan Kills 333 Whales in Antarctic Hunt, Ignoring International Laws
Researchers did not know what to expect when they began the effort. They knew that adult humpback whales have a high-pitched song, but had not previously recorded the sounds of the calves.

"It's like a squeaky sound, and some of them are really like grunting sounds," researcher Simone Videsen told NPR.

Scientists previously assumed that the young whales made noise when they were hungry, but now theorize that the sounds allow their mothers to keep track of them as they travel through the ocean.

Interestingly, the sounds are very quiet, which the scientists say may be to avoid being heard by dangerous predators who feed on calves, such as orca whales.

"There are lots of killer whales in the area which are predating on these calves," Videsen said, "and they can use these sounds between mother and calf as like homing cues."

While mother whales are capable of being quite loud, the scientists found that they will also often “whisper” back to their calves.

The researchers noted that if the calves are in fact whispering to avoid predators, it may mean that the species possesses greater intelligence than previously believed.