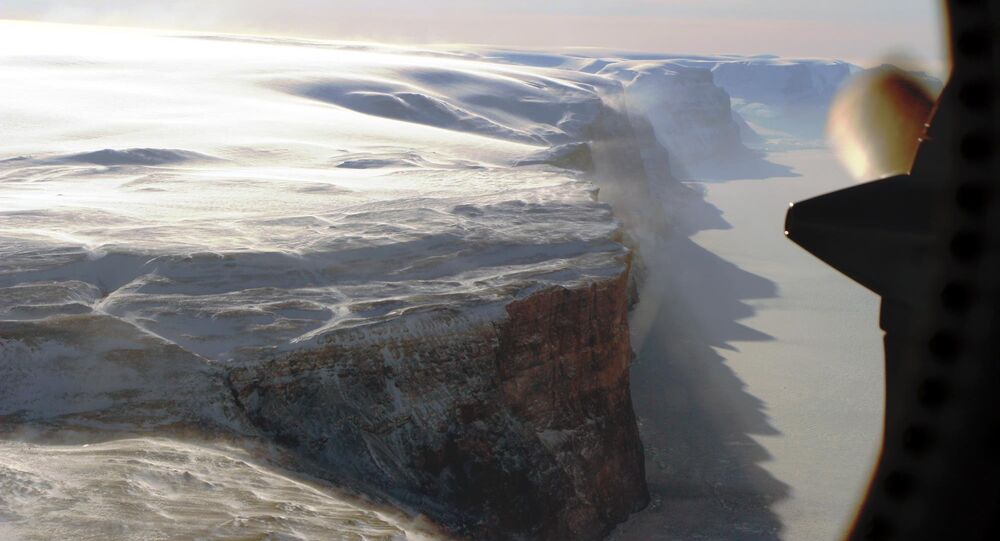 A team of NASA researchers have snapped a photo of the long crack in the Petermann Glacier along the northern coast of Greenland. There is a chance that the new crack could meet an older one and split off an ice island twice the size of Manhattan.

The researchers are members of Operation IceBridge, a nine-year NASA research mission to monitor polar ice through the use of specialized aircraft. Planes equipped with cameras and other scientific instruments canvas the ice coverage and formations in Antarctica as well as Greenland.

Stef Lhermitte, an associate professor of geoscience with the Delft University of Technology in the Netherlands discovered the crack close to the town of Qaanaaq in the northernmost reaches of Greenland.

Since then, weather satellites have been monitoring the crack for signs of development. NASA and other scientific bodies are concerned about it because the crack is unusually close to the center of the Petermann Glacier. Typically when a glacier fragments, it does so at its edges.

Nobody is sure why the glacier is doing this. Lhermitte's theory is that warm water is trapped underneath the glacier core, but he doesn't know how it would have got there. He said in a statement that it was "amazing to see the rift from nearby after studying it from space for several days." However, "from these images alone it is difficult to already say anything about what exactly caused the crack on this unusual spot."

© NASA . Operation IceBridge
The Petermann Glacier, whose new crack is visible in the lower section of the photo.

It still isn't clear if Petermann will crack at all. There's an older and larger crack on its edge that scientists are concerned may join with the new one, but there's a medial ice flow line (a natural pipeline through which ice moves throughout the glacier) separating the two, and the medial ice flow line "may exert a stagnating effect on the propagation of the new rift toward the older one" according to a NASA Facebook post.

Glacier splitting can raise sea levels, but typically not by very much. Glaciers are in effect gigantic ice cubes floating on the surface of the water — and just like an ice cube floating in a glass of water, when they melt they don't raise water levels. If the Petermann Glacier does crack, the only increase in sea levels would be from ice currently held in place by the glacier falling into the sea.

© NASA . Project IceBridge
Satellite topographical imaging of the crack in the Petermann Glacier.

Petermann Glacier has undergone two calvings in recent years, one in 2010 and one in 2012. The 2010 island in particular received a great deal of media attention, and was discussed on the floor of the US House of Representatives.

"Last week an ice sheet covering 100 square miles broke off Greenland," then-Rep. Edward J. Markey, D-Mass., the chair of the select committee on energy independence and global warming, said in 2010 during a hearing regarding the glacier. "This giant ice island is more than four times the size of Manhattan. It is the largest piece of Arctic ice to break free in nearly half a century."

Despite significant ice loss, Petermann Glacier has retained most of its size because it rapidly forms new ice. NASA estimates that the new ice island would be 50-70 square miles in size, should it form.

Huge Fresh Crack in Earth Filmed by US Geologists With Drone