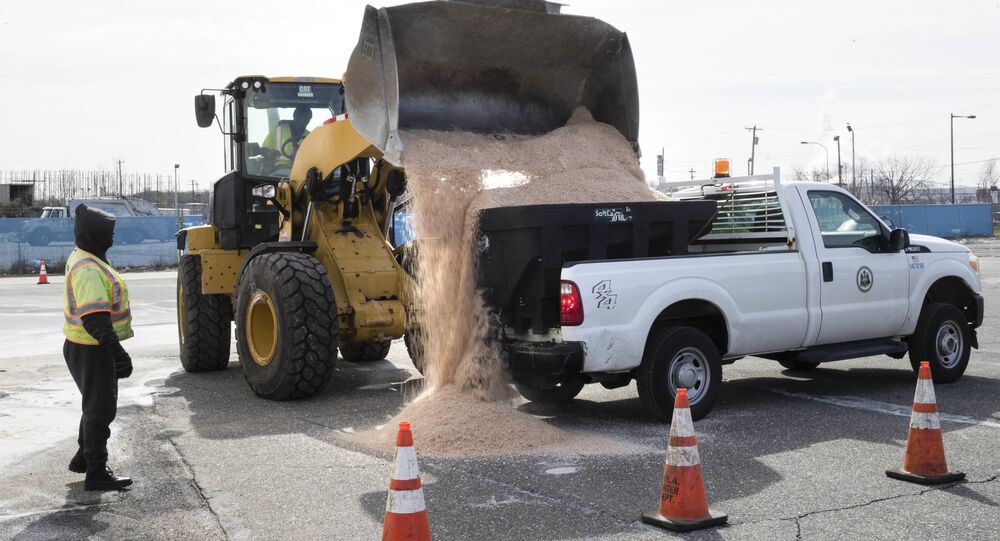 Where Did Spring Temperatures Go? US East Coast Bracing for Blizzard (PHOTOS)

Bundle up, East Coast, as the biggest March snowstorm in over a century is about to slam into you, with a blizzard warning over New York City and parts of New Jersey. Snowfall is expected from Maine down to parts of northern Virginia.

​A National Weather Service (NWS) travel warning has been issued, predicting record-low temperatures beginning Monday evening. Travel in and out of New York has been declared &"extremely dangerous" due to what are expected to be whiteout conditions and 60-mph winds.

Bad will soon get worse on Lake Ontario. A foot of snow is on the way for parts of #WNY @spann @JimCantore @StormHour @News_8 @WizardWeather pic.twitter.com/Bnq2Fyp6Zv

​"Significant amounts of snow are forecast that will make travel dangerous. Only travel in an emergency. If you must travel, keep an extra flashlight, food and water in your vehicle in case of an emergency," said the NWS. Over 5,000 flights have been canceled according to FlightAware, with the hardest-hit airports being Newark, Logan, JFK, BWI, and Philadelphia.

​That the storm is coming relatively late in the season is causing concern that it could interfere with plants waking up from winter stasis. The National Weather Service has warned that cold air in South Carolina could kill 90 percent of the peach crop in some areas.

​The storm is a classic nor'easter, a cyclone which draws its name from the Northeastern United States areas in which they ordinarily make landfall. Nor'easters are formed when warm Gulf Stream air meets cold air traveling south from Canada. This nor'easter is the third of the season, with two others occurring in rapid succession in February.

The tracks of the Duquesne Incline in #Pittsburgh look vertical in this view from straight across the Ohio River after a fresh snowfall pic.twitter.com/AvGtyowG9M

​March nor'easters are not uncommon. The Great Blizzard of 1888 killed around 400 in the region and the 1993 Storm of the Century dropped snow across the entire East Coast, killing 318 people in the US and Cuba. However, this will be the first blizzard predicted to drop over a foot of snow in Manhattan in March since 1960, and only the fifth on record.

​The 1888 blizzard dropped 21 inches of snow on New York City, a record for the month of March that has yet to be broken. The 2017 storm is not expected to break that record, as most projections have 12-18 inches of snow falling in the city.

​Residents of New York, Pennsylvania, Massachusetts, Connecticut, Rhode Island, and Maine are advised to be prepared with emergency supplies, as a foot or more of snow is expected throughout the Interstate 95 corridor. Those farther south, such as Maryland, Virginia, Delaware, and Washington DC should be braced for rain and sleet, as well as an undetermined amount of snow.