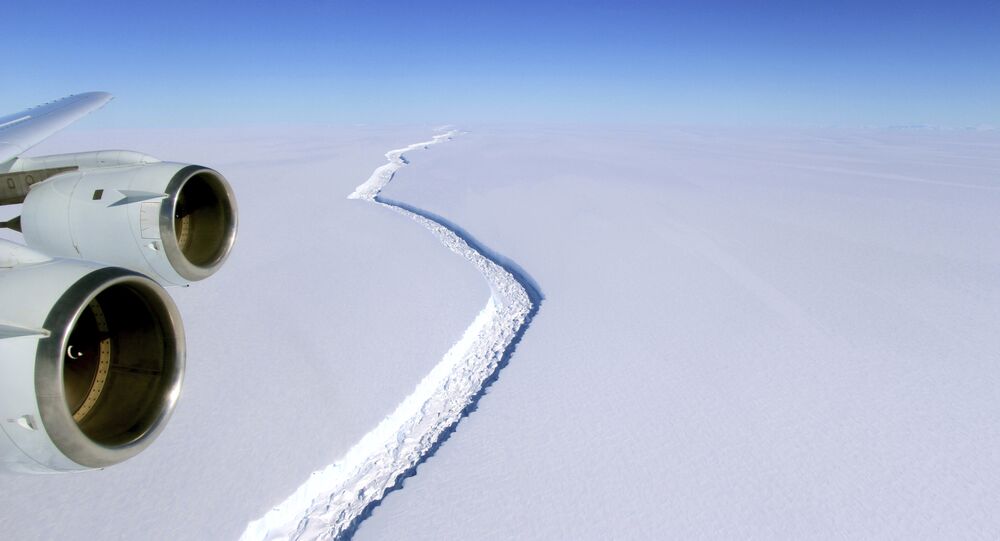 A large crack has formed in the massive Larsen C ice shelf in Antarctica, according to the British Antarctic Survey (BAS). Larsen C has formed a crack some 1500 feet wide and 100 miles long, and is projected to break off entirely in the near future. This will create a new iceberg with a surface area of almost 2000 square miles.

The British Antarctic Survey (BAS) and Project MIDAS, a UK government-sponsored Antarctic research group, have been carefully monitoring Larsen C for years, in anticipation of the breakup. The process, known as ice calving, began last year and is expected to conclude in 2017, with the creation of a new iceberg the size of the state of Delaware.

The Larsen C Ice Shelf is the fourth-largest ice shelf in Antarctica, and has been slowly disintegrating in recent decades. Larsen A broke off in 1995, while the 1200 square mile Larsen B (about the size of the state of Rhode Island) cracked away in 2002.

A 2004 study, by the University of Innsbruck in Austria and the Alfred Wegener Institute for Polar and Marine Research in Germany, found that Larsen C was stable, but could break up as the Antarctic continent continued to warm.

The prediction came true 12 years later, when Larsen C began to calve in summer 2016. The 300-foot rift recorded in November 2016 has now grown to over five times the size in just three months.

When the iceberg calves, it will be the fifth largest in recorded history. Although this will not cause sea levels to rise it will invite further break-ups of Larsen C over coming decades.

If the 20,000 square miles (about the size of the state of Louisiana) of Larsen C falls into the ocean, worldwide sea levels would rise by some 10 cm, according to glaciologist Adrian Luckman with Swansea University.

Icebergs form naturally when chunks of ice break off from the edge of ice formations that lie on the edge of oceans. "Iceberg calving is a normal part of the glacier life cycle, and there is every chance that Larsen C will remain stable and this ice will regrow," Paul Holland of BAS said. "However, it is also possible that this iceberg calving will leave Larsen C in an unstable configuration. If that happens, further iceberg calving could cause a retreat of Larsen C."

Although some point to the ice shelf breakup as evidence of catastrophic climate change, MIDAS scientists deny a connection. "We have no evidence to link this event to climate change. Although the general southward progression of ice shelf decay down the Antarctic Peninsula has been linked to a warming climate, this rift appears to have been developing for many decades, and the result is probably natural," they wrote on the MIDAS blog.

© AP Photo / John Sonntag
In November 2016, the Larsen C fracture was about 70 miles long, more than 300 feet wide and about a third of a mile deep.

The BAS expressed itself differently. "There is not enough information to know whether the expected calving event on Larsen C is an effect of climate change or not, although there is good scientific evidence that climate change has caused thinning of the ice shelf," they wrote.

Whether Larsen C's break-up is man-made or not, the new iceberg is almost certain to form later this year. The break-ups of Larsens A and B did not produce icebergs, instead the chunks of ice sank beneath the waves and melted.

Ever Wonder What's Lurking Under an Iceberg?