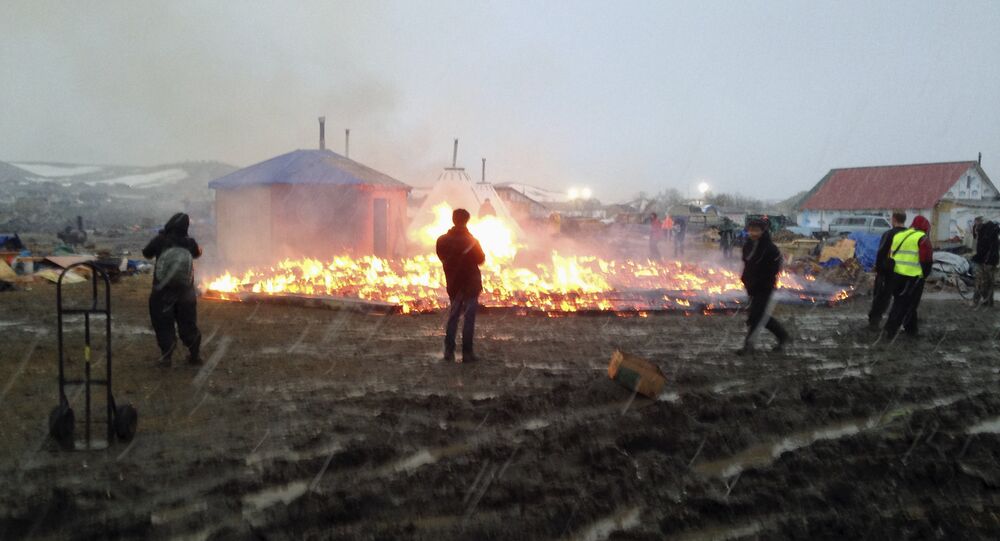 Native Sioux tribe members and their allies concluded a final hurrah at the last remaining Dakota Access anti-pipeline camp, with prayers to ancestors and a burning of the wooden infrastructure built at the camp.

“People are being very mindful, trying very hard to stay in prayer, stay positive,” Nestor Silva, of California, said. The Army Corps of Engineers forced the protesters to leave the grounds and close the camp by 2 p.m. Central time Wednesday as a threat of spring flooding is growing near. Participants said that burning wooden structures, including a yurt and a teepee, were part of a ritualistic tradition marking a departure of the tribes.

The protesters had been camping on federal land in between the Standing Rock Sioux Reservation and the route of the 1,172 mile, $3.8 billion pipeline that is meant to funnel oil from the Bakken formation in the Dakotas to Illinois. The camp that once provided shelter to thousands of protesters has seen its occupancy fall to a few hundred. The Sioux tribes suffered a significant legal defeat on Valentine’s Day at the hands of a Washington DC judge who denied a request to stop pipeline production, prompting the Kandi Mosset Indigenous Environmental Network to declare “we will continue the legal battle,” according to an interview with Sputnik International.

​A spokeswoman for the Morton County sheriff’s department said, “we prefer to handle this in a more diplomatic, understanding way.” Protesters that have not left by the mandated evacuation could be slapped with a $5,000 fine or up to six months in jail, according to Army Corps Capt. Ryan Hignight. Native American activist Chase Iron Eyes indicated that some are ready to be imprisoned to stand up for their land, but grievances would be aired “in peaceful, civil resistance” with measures such as “holding hands, standing in prayer.”

Local authorities have established a transitional center for protesters with nowhere else to go. The campers have their own plans in mind, however. “The camps will continue,” according to local leader Phyllis Young, who said the groups would mobilize on nearby private lands and other native camps. “Freedom is in our DNA, and we have no choice but to continue the struggle,” Phyllis said.