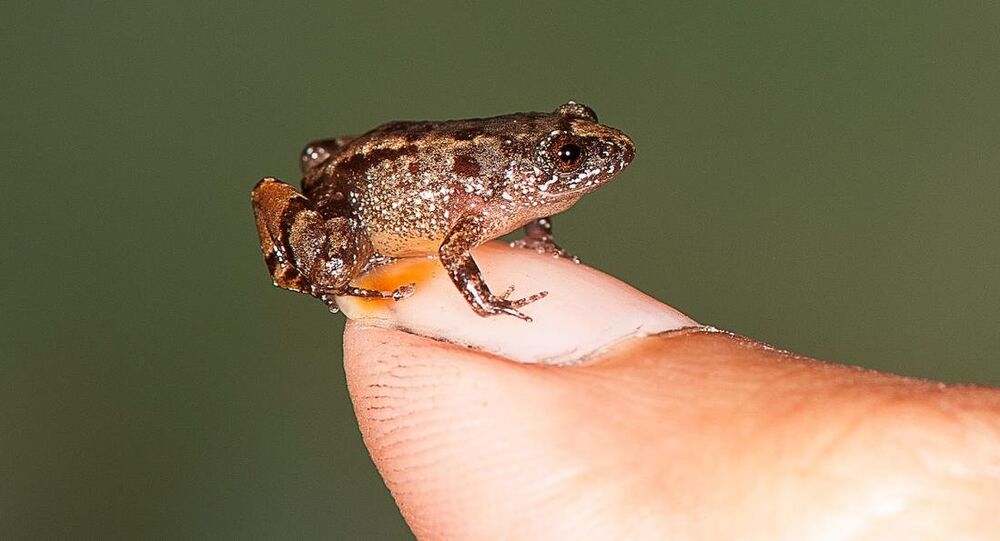 New Species of Frogs Smaller Than Fingernails Found in India

The new species of frog are smaller than an inch in size and exclusively belong to the Western Ghats in Peninsular India but are already under threat of extinction.

Scientists in India have made a sweet discovery: Seven new frog species, four of which are about the size of an M&M https://t.co/AyyyJZK2Fg

Scientists believe that these miniature frogs were overlooked because of their insect-like calls and secretive habitats. The new frog species belong to the genus Nyctibatrachus, commonly known as Night Frogs. This find is a result of five years of extensive explorations in the Western Ghats by a group of biologists led by Prof SD Biju of University of Delhi.

​Unlike other frogs in the genus that are predominantly stream dwelling, the new miniature frogs were found under damp forest leaf litter or marsh vegetation. Scientists were surprised by the relative abundance of these previously unknown species at their collection localities. The Night Frog genus composed of 28 recognized species of which only three were miniature-sized (<18 mm). Now the total number of known night frog species has increased to 35, of which 20 percent are diminutive in size.

This frog genus is endemic to the Western Ghats of India and represents an ancient group of frogs that diversified on the Indian landmass approximately 70-80 million years ago, according to the study published in the Science Daily.

The future of these night frogs is uncertain, as more than 32 percent of the Western Ghats frogs are threatened with extinction.

“Over 92% of the presently known 225 amphibian species of the Western Ghats are endemic to this region. An exponential two-fold increase in the number of species over the last decade and a half has evidenced that a vast majority of amphibians of this region had remained undiscovered until recently and the trends also suggest that the actual diversity may still be higher than currently estimated. The present rate of species description from the Western Ghats is also comparable to the eight ‘hottest’ biodiversity hotspots of the world,” reads a study published in science journal PeerJ.

It is home to hundreds of species of animals and plants, of which 145 species listed as endangered and 51 as critically endangered, according to the UNESCO.

India to Add 42 Radar Stations for Surveillance in Western Coast