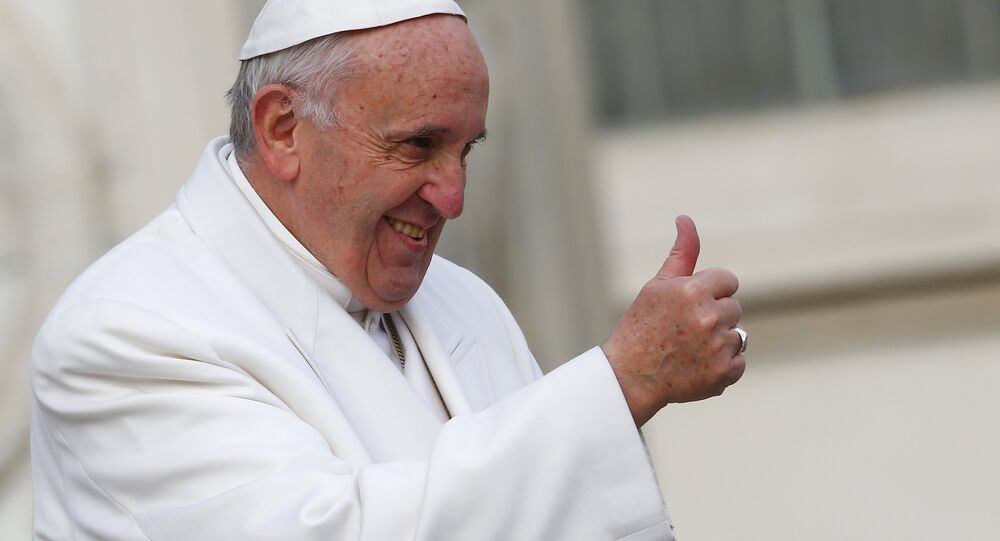 Pope Francis made a Wednesday speech defending the rights of indigenous tribes to ‘their ancestral relationship to earth’. Although he did not mention it by name, his explicit comments on the subject suggest that he is a supporter of those protesting the Dakota Access Pipeline.

During the Indigenous Peoples Forum in Rome, the pope made a brief speech regarding the age-old struggle between development and native peoples. Speaking in Spanish, Francis said that industry always had to be aware of "the protection of the particular characteristics of indigenous peoples and their territories".

In particular, the need to protect native territories became "especially clear when planning economic activities which may interfere with indigenous cultures and their ancestral relationship to the earth".

The Standing Rock and Cheyenne River Sioux, the tribes protesting the pipeline, have argued that the project would interfere with religious ceremonies around a lake that is sacred ground to them.

Citing the United Nations' 1997 Declaration on the Rights of Indigenous Peoples, the pope said that on matters of faith "the right to prior and informed consent (of native peoples) should always prevail."

He added a plea for the governments of the world to understand "that indigenous communities are a part of the population to be appreciated and consulted, and whose full participation should be promoted at the local and national level".

Francis's speech comes two days after a federal judge denied a request from the tribes to halt construction on the 1,170 mile pipeline. In January, President Donald Trump issued an order to continue the project after it was effectively halted by his predecessor.

Francis has been indirectly critical of other policies of the new administration, such as a speech in February where he said societies should not create "walls but bridges". He also sent a letter to the church's leadership in 2015 where he wrote all human activity had to be done with consideration for the planet first.

After months of back-and-forth, it appears that the Dakota Access Pipeline will be completed and moving oil as soon as March 2017. Protests continue, although only a fraction as many as in late 2016.