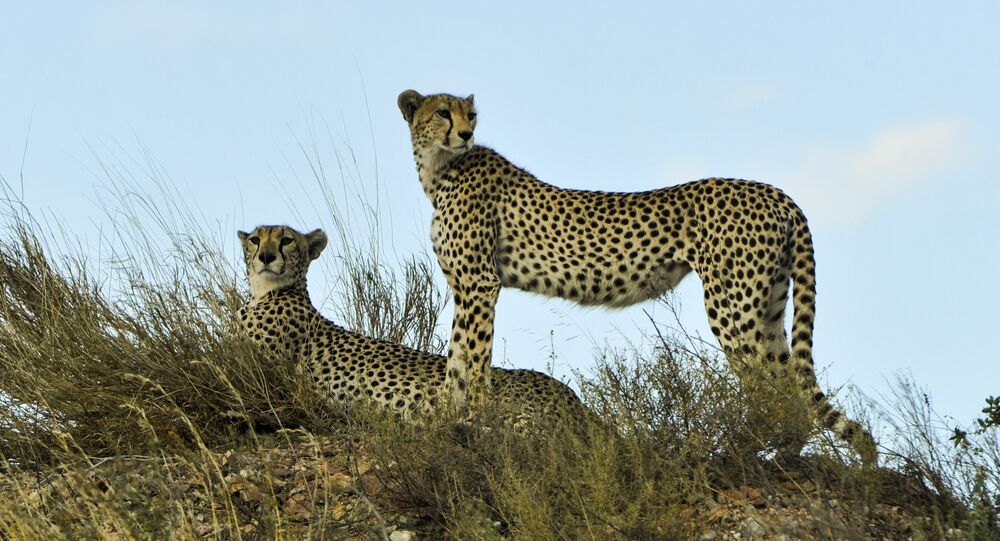 The world's fastest land animal, the cheetah, is sprinting towards extinction and could soon be lost forever, according to a new study. It warns there are just 7,100 left in less than 9% of the species' former habitat. Lead author Dr. Sarah Durant told Sputnik why the world needs to "hit the reset button" to save these big cats.

The cheetah may may be able to sprint at speeds of 70mph, but not everything can be outrun.

With the threats posed by humans, whether it's competition for land, hunting or the trade in exotic pets, these majestic animals are falling behind in the struggle to stay alive.

Estimates indicate just 7,100 #cheetahs remain in the wild following the publication of a new study led by #ZSL: https://t.co/5qfZCiYsSd pic.twitter.com/zik8AoxGnd

​A wide-ranging new report, led by the Zoological Society of London, has found that the damage done is worse than many feared.

Having being driven out of 91% of their former habitat, there are now just 7,100 cheetahs left. In some parts of the world, the threat of extinction is particularly dire: in Asia there are only 50 individuals left.

​Wildlife biologist and Zoological Society of London lead author, Dr. Sarah Durant, told Sputnik that due to their dramatic decline, the cheetah's official status should be changed.

​The researchers are calling for the cheetah to be up-listed from 'Vulnerable' to 'Endangered' on the International Union for the Conservation of Nature (IUCN) List of Threatened Species.

"Because most cheetah (67%) and most cheetah habitat (77%) is outside protected areas, our key recommendation focuses on the need for a paradigm shift in conservation." Dr. Durant said.

"We argue that we need a landscape approach to conservation if we are to secure the survival of cheetah in the long term, that incentivises local communities to protect wildlife and promotes sustainable human-wildlife coexistence outside protected areas."

The study explains that cheetahs are currently dangerously vulnerable to trophy hunters and illegal trafficking for exotic pets, mainly driven by demand from Gulf states, where they are seen as a sign of wealth and prestige.

With the recent decline in numbers @instagram you need to stop the illegal pet Cheetah trade on your site! pic.twitter.com/pvDC0uctMh

​​Live cheetah cubs can fetch up to $10,000. However, according to the Cheetah Conservation Fund, most die during the journey out of Africa.

© Photo : Youtube/YouTubeOne
Have You Ever Heard a Cheetah Meow?

One example of where cheetahs have been particularly at risk from humans is Zimbabwe. The population has plummeted from 1,200 to a maximum of 170 animals in just 16 years — an incredible loss of 85 % of the country's cheetahs.

In October 2016, at at CITES conference in Johannesburg, South Africa, African and Arab countries agreed to suppress the advertisement and flaunting of cheetah trafficking on social media. CITES regulates international trade in endangered plants and animals.

Dr. Durant told Sputnik that her team has been monitoring the decline of cheetahs since 2007. In another ten years, it's not yet clear how many of the species will be left to document.

Have You Ever Heard a Cheetah Meow?

Survival is a Tall Order for Giraffes Facing 'Silent Extinction'

Two Men and 535 Tigers: the Battle Against Extinction