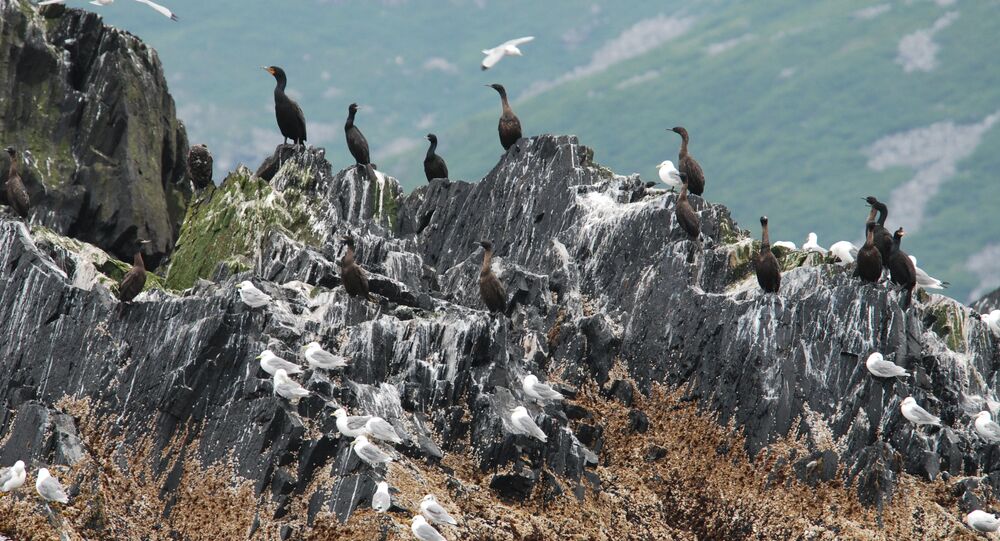 The Arctic's tender environment is notoriously susceptible to climate change and may become the largest victim of global warming. In an unorthodox hypothesis, feces from migratory seabirds may play an important role in averting climate change.

© Sputnik / Valeria Yarmolenko
Mercury is Falling: Arctic Quicksilver Huge Environmental Threat
Atmospheric research carried out around Nunavut, Canada, and published in the Nature Communications magazine, claims to have found that ammonia from bird droppings may activate cloud building, thus having a cooling effect on the atmosphere and even alleviate global warming.

In summertime, nesting bird colonies across the Arctic drop tons of ammonia-rich excrement, which later evaporates and reacts with airborne sulfuric acid. With some water added, these molecules may form stable particles, which can eventually grow larger and form so-called cloud condensation nuclei. They function as core for tiny droplets sized one millionth of a meter, of which clouds are formed.

© AFP 2021 / CARL COURT
Trouble Spot: Norwegian Masterwork Reveals its Dirty Secret
Caroline Leck, a professor of chemical meteorology at Stockholm University, concurred with the theory, saying that biomass may be able to counter the rapid rise of temperatures in the region.

"I have investigated similar particle formation models farther toward the North Pole. There are no birds there, but there are biomass particles of algae and bacteria," Leck told Swedish national broadcaster SVT.

Remarkably, this is not the first time guano has been linked with particle formation. In a 1999 study, the same effect was discovered from a penguin colony on an island located between New Zealand and Antarctica.

© Sputnik / Sergey Rusanov
Climate Change: 80,000 Reindeer Starve to Death as Arctic Sea Ice Retreats
​The exact role which clouds play in the climate has not yet been fully established, but the low-lying clouds were nonetheless found to have a cooling effect on the Arctic region. In addition to providing precipitation, clouds are important for the radiation balance of the Earth. Some of the heat is simply being kept away by reflecting the sunbeams back into space.

The only problem is that bird feces, however ample, may be not enough to stop the effects of global warming.

The ice area in the Arctic reached a record low this season, with temperatures up 10 degrees above the norm, ice researcher Rasmus Tonboe at the Danish Meteorological Institute reported. According to Tonboe, the present-day ice deficit may create a vicious circle: as it clearly takes more time for the ice to grow thick in winter given the elevated temperatures, it melts faster in summer.