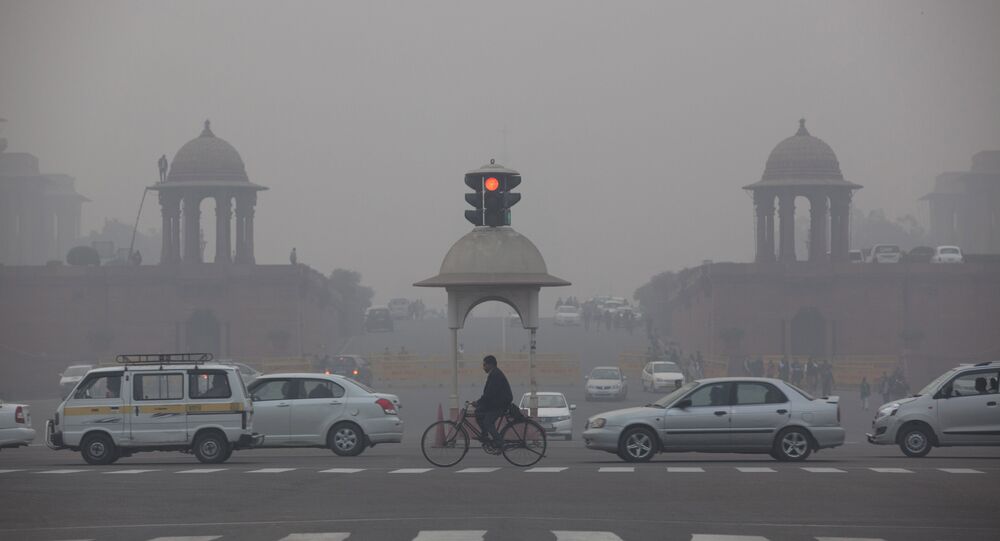 NASA’s satellite images suggest that air pollution unlikely to come down anytime soon in a city where every third child has respiratory problems.

New Delhi (Sputnik) — As the festival season began ebbing, India woke up to a startling revelation that fire crackers are shortening the life-spans of future generations rather than adding to the joy of the occasion.

© AP Photo / Tsering Topgyal
Delhi Air Pollution 42 Times Higher Than Limit During Diwali
The Indian Meteorological Department provided the grim update: Delhi is facing the worst smog with very poor visibility even during daytime in 17 years. The post-Diwali festival smog created by the burning of millions of firecrackers reduced visibility to 800-1,200 meters leading to traffic pile ups and deaths on expressways leading out of Delhi.

Meteorological scientists have warned that this state of affairs will continue for few more days. Satellite image published by NASA suggest that apart from crackers, the burning of crops in neighboring states of Delhi could be the biggest contributor to the severe smog in the India’s capital.

“Delhi needs an effective winter pollution mitigation plan that can make a difference. Without strong action smog is only expected to get worse this winter at the cost of the public's health,” says Anumita Roychowdhury of Centre for Science and Environment, a Delhi based research and advocacy organisation.

​Due to bad air quality, people suffering from respiratory diseases have been making frequent visit to hospitals. A government study has shown that every third child in Delhi has impaired lungs.

#MoEFCC will soon issue an advisory to concerned states on taking up short, medium and long term measures to tackle air #pollution.

​Sensing the emergency, India’s Central government has called for an urgent meeting to chalk out short term and long term strategy to curb pollution levels in Delhi.

“On Friday we have called all the state secretaries for a meeting. Then I will meet their state ministers followed by consultations with various stakeholders. Then we will consider short, medium and long term plans to tackle air pollution for Delhi. We will also issue a recommendation or advisory and tell the states to implement it,” said India’s Minister for Environment and Forests Anil Madhav Dave.