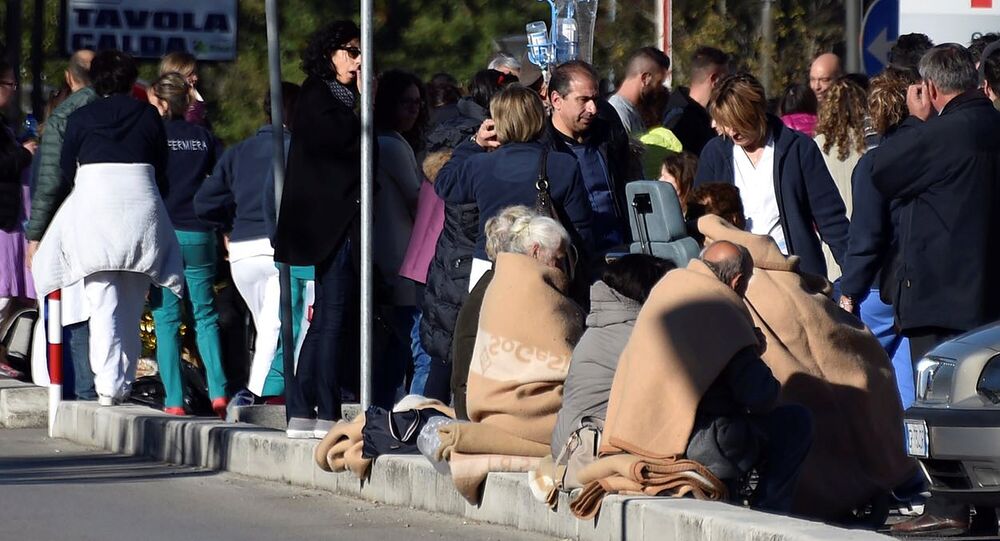 Eight over 4.0-magnitude earthquakes hit central Italy on Sunday, the European-Mediterranean Seismological Centre (EMSC) reported. The natural disaster brought down numerous buildings across the country. No deaths have been reported but a number of people have been injured, the civil protection services said.

The quake was so long and powerful that Rome residents were woken up by the shaking of their houses' walls, a RIA Novosti reporter said. Two ancient churches — the church of St. Benedict and the church of Santa Maria Argentea — were reportedly destroyed in the town of Norcia.

In #Norcia firefighters are evacuating nuns from the church.#Terremoto #earthquake pic.twitter.com/DF18hwoIJK

There are reports about destruction in the regions of Marche and Umbria.

"It all collapsed, I see columns of smoke, it is a disaster, it is a catastrophe, I have seen hell."

He added that nobody is likely be injured as local residents left the settlement after first tremors several days ago.

Civil protection services are checking whether there were any casualties.

​The most powerful 6.5-magnitude tremor was registered at 06:41 GMT. The epicenter of the earthquake laid 10 kilometers (6.2 miles) deep between the cities of Perugia and Macerata. The magnitude was initially measured at 7.1.

The Basilica of St. Benedict is destroyed, flattened by most recent earthquake. #Terremoto pic.twitter.com/GQDl64LhFn

Seven other powerful tremors including those with 4.6 and 4.8 magnitude followed the major earthquake.

Woken up by the hotel room shaking, hope people are safe this morning. #Terremoto #earthquake

The epicentre of this #earthquake was again between Umbria and Marche according to @LastQuake — but significantly stronger than past ones. pic.twitter.com/fjNBZe8mxj

As far as I can say from Rome, this was the most powerful and shaking #earthquake shock ever felt in the last months#Terremoto

Rome's authorities closed the underground to conduct necessary security checks. There are no reports about any damages in the Italy’s capital.

Monks and nuns praying with people in the main square in Norcia, devastated by today's quake: #terremoto #earthquake #Norcia pic.twitter.com/qNZZWDYhKd

​​On Wednesday, two other earthquakes of magnitudes of 6.3 and 5.4 hit the region of Marche. Another tremor was felt in the late hours of the day.

Map of the last 7 days of seismicity. The mainshock M6.5 is located about 10 km N-NE of Norcia pic.twitter.com/heBT0WSuyC

On August 24, a 6.0-magnitude earthquake hit Italy, causing damage across the regions of Umbria, Lazio and Marche and resulting in the deaths of over 290 people.

What to do after violent shaking? Here are some hints! Always follow instructions from emergency services pic.twitter.com/3XJYaG9kCB

Italy Grateful to Russian Emergencies Ministry for Assistance After Earthquake

Life After Shock: Earthquake Affected Italian Cities to be Wooden