Concerns and opposition to fracking in Scotland will only be eased once operators begin extracting billions of cubic feet of shale gas, Tom Crotty, Director of Communications for chemicals giant INEOS told Sputnik on Tuesday.

"If you go to rural Pennsylvania where the Marcellus shell, the biggest field in the world is being developed, it's an invisible industry. I think once we start extracting shale gas then people will realise that but until we start it's almost impossible to reassure people," Crotty said.

The Scottish Government currently has a moratorium in place preventing INEOS from extracting an estimated 80 billion cubic feet of shale gas in Central Scotland, despite holding licenses to do so. Scottish Ministers are currently evaluating the impact shale gas extracting, known as fracking, will have on local environments.

According to Crotty, there are strong economic reasons why the government should give the green light to fracking in Scotland.

"I'm not sure what more can be done to persuade the Scottish Government of the merits of shale gas exploration. What we have tried to say is that we need the gas for jobs. The North Sea is running out, whatever way you cut it. We're importing close to 16 percent of our gas needs now and there is gas right under our feet, so using it seems like a great way to boost the Scottish economy, keeping finances in Scotland and not spending it somewhere else, particularly at a time when North Sea revenue is declining," he explained.

Environmental groups in Scotland strongly oppose the shipment of shale gas from the United States describing it as "dirty and dangerous," but Crotty told Sputnik there were strong environmental reasons why shale gas would play an important environmental role in the decades to come.

"One of the issues for us is to say, firstly, that gas is essential. We can't see a future in the next 30, 40, 50 years that doesn't involve gas. It's the cleanest hydrocarbon fuel you can have. The UK's supplies of it are running lower and lower, but if as a transition fuel to renewables you have to have gas," he said. 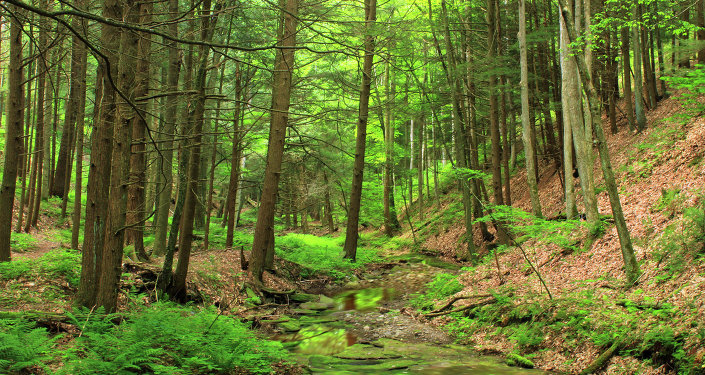 © Flickr / Nicholas A. Tonelli
Frack that: Fracking Coming Soon To A Forest Near You
INEOS owns one of the United Kingdom’s largest refineries at Grangemouth. It has secured shale gas exploration licenses for 700 square miles of Scotland. The company says it wants to invest 640 million pounds ($910 million) in fracking despite the Scottish moratorium.