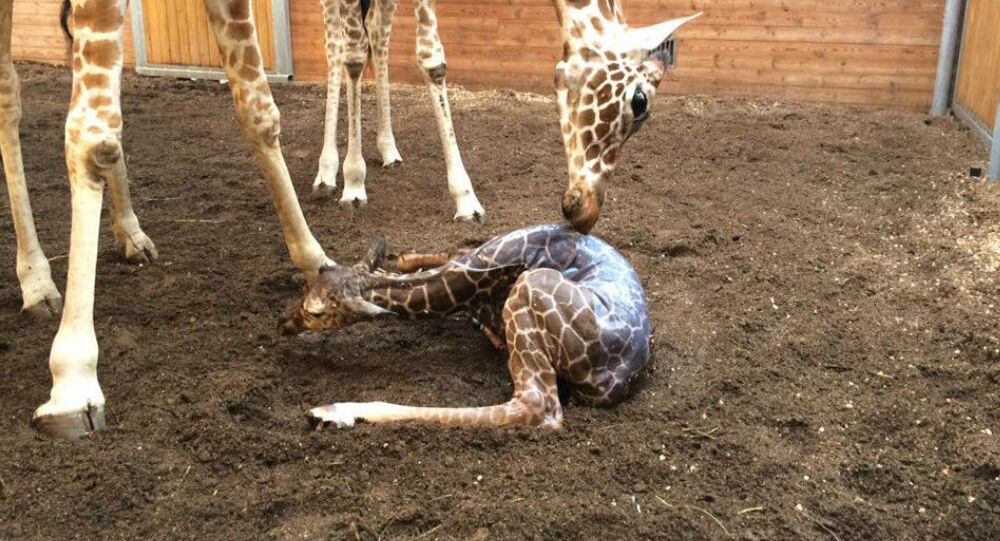 In 2014, the Copenhagen Zoo sparked global outrage by killing a two-year-old giraffe, written off as a 'surplus animal.' Today, a newborn giraffe kid, whose birth was watched online across the world, may face the same grim fate as Marius, who died at the hands of zookeepers only to be dismembered and fed to the lions, with children looking on.

Last Friday, the Copenhagen Zoo posted a video of the baby giraffe's birth. The animal quickly gained its footing to the joy of numerous onlookers and was subsequently examined by veterinarians and chipped, Danish TV channel TV2 reported. Although the calf was declared fit, it still risks meeting the same infamous fate as the two-year-old Marius, who was culled as a ‘surplus animal', despite not being inbred.

Two years ago, zoo officials claimed that Marius's genes were too common in the zoo population. The ill-fated two-year-old giraffe male was barred from breeding and was subsequently shot in the head with a bolt gun. The reason why a more "humane" way of killing, such as a lethal injection, was rejected is that the giraffe carcass was to be fed to the zoo lions.

The decision sparked outrage from animal rights groups and animal lovers around the globe, who thought that killing Marius was both cruel and unnecessary, since numerous other zoos and private individuals had volunteered to take care of the unfortunate giraffe, offering up to €500,000 for the animal. The dissection process was watched by a large number of children. The zoo's spokesman expressed bizarre pride in giving the young onlookers "a huge understanding of the anatomy of a giraffe."

According to the European studbook for giraffes, only five giraffes have been culled since 1828 to preserve the purity of the genes. As for the newborn giraffe, it is yet unknown whether or not he will meet with the same nasty fate.

"When the giraffe reaches the age of two, when it would leave its herd in the wild, we will see if there is room for it in another zoo. We will of course do our best to find a place for it, but if it cannot be done, it will be killed," the Copenhagen Zoo wrote on Facebook.

Remarkably, the public slaughter of animals is not a one-off event in Copenhagen. In a morbid display of Darwinist irony, the very same four lions to which Marius's carcass was fed under the eyes of schoolchildren were later euthanized in order to make room for a new male lion. In 2012, two leopard cubs were killed by lethal injection for the same reason as Marius; their genes were "overrepresented" in the zoo's population, rendering them useless in terms of breeding.

Unlike many of its European and American peers, Copenhagen Zoo opts not to administer contraception to animals to avoid creating "superfluous" offspring, in a bid to allow animals to breed "the natural way." According to zoo officials, putting down some of the young animals mimics nature, as young animals are prone to dying of predation, injury or natural causes.

In July, an eight-year-old giraffe named Mgala died in the Odense Zoo, Denmark, after a painful accident with a feed distributor and was subsequently fed to zoo predators, the Danish tabloid newspaper BT repored.