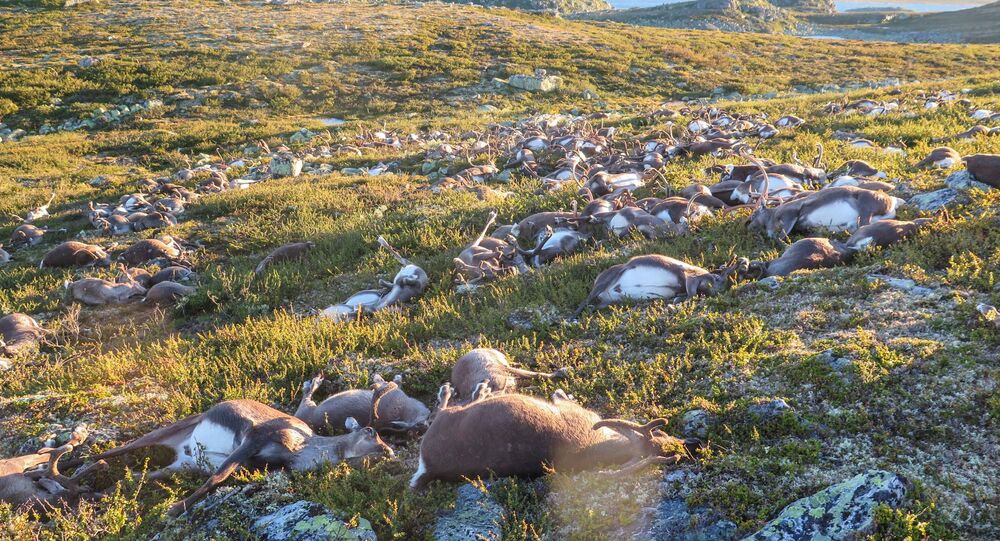 Hundreds of reindeer have been found dead in the picturesque Norwegian mountain region of Hardangervidda. Although the cause of the bizarre event remains unknown, the mysterious loss has been blamed on a lightning strike.

Although mass deaths of such proportions are fairly uncommon, a lightning strike is believed to have been the culprit. Both adult animals and calves were reported dead.

"There was an especially heavy thunderstorm in the afternoon. The herd was probably struck dead by the lightning," Nylend said, noting the uniqueness of this case. "This is very special. I've heard of cattle being killed by lightning, but not in such huge volumes," Nylend explained.

​SNO personnel are reported to be working at the site, taking samples of the dead animals. According to Nylend, the corpses lie very close together, which is why a lightning strike is suspected.

Samples of the dead animals' blood and tissue will be examined for chronic wasting disease (CWD), which was detected in both Norwegian reindeer and elk earlier this year.

"We will seize this opportunity to check if there are infected animals," Nylend said.

© Flickr / Stian Olsen
Lucky Shot: Norwegian Lottery Machine to Choose This Year's Elk Hunters
Chronic wasting disease (CWD) is a transmissible spongiform encephalopathy (TSE) which is only found in members of the deer family, such as mule deer, white-tailed deer, elk or moose. Remarkably, this disease has been known to affect cervids in North America since the 1960s and is closely related to mad cow disease and only affects adult animals. As of today, there is no evidence of the transmission of the disease to humans. So far it remains unclear how the deer carcasses will be disposed of.

Pristine landscape in #Hardangervidda with 30 public huts and endless trails to hike in the heart of #Norway. pic.twitter.com/2WhltjsFW3

Happy Birthday! Norway May Gift a Mountain to Finland