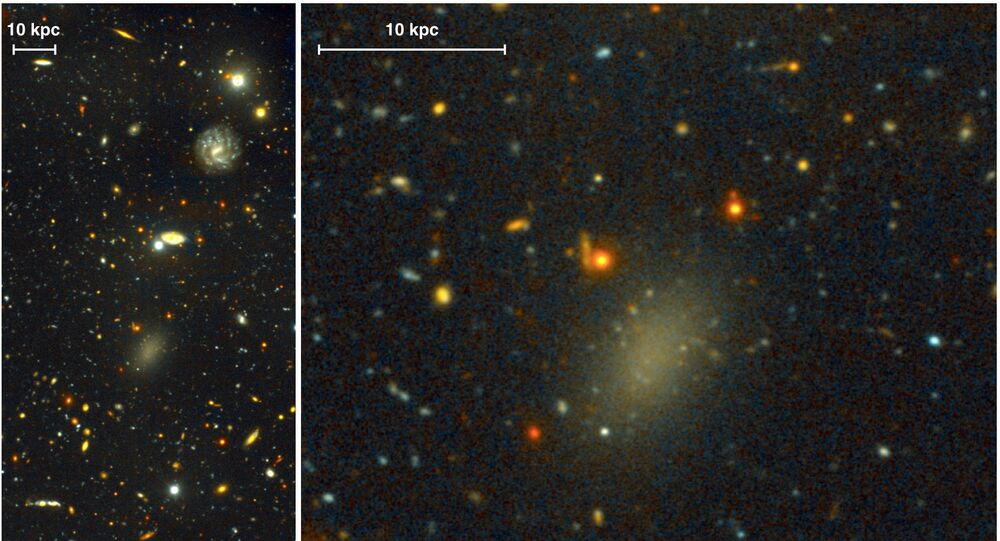 Scientists have discovered the largest galaxy yet which consists almost entirely of mysterious black matter.

© Sputnik / Vladimir Astapkovich
Shooting Stars: Cameras Across the Globe Snap Time-Lapse of Perseid Meteor Shower
Scientists have discovered a new galaxy that is as big as the Milky Way, but has very few stars and consists almost entirely of dark matter.

Called Dragonfly 44, the galaxy is one of a 47-strong set of ultradiffuse, or "fluffy" galaxies discovered in 2014 using the Dragonfly Telephoto Array of lenses.

Dragonfly 44 is located in the Coma Cluster, a group of at least 1,000 galaxies around 300 million light-years from Earth.

The dim galaxy has a mass estimated to be 1 trillion times the mass of the Sun, similar to the mass of the Milky Way. However, only 0.01 percent of the galaxy is in the form of stars and "normal" matter.

The other 99.99 percent is in the form of dark matter, an unidentified type of matter which accounts for 27 percent of all matter in the universe, outweighing visible matter by six to one. Dark matter does not have an electric charge and therefore cannot be observed by shining a light on it. Scientists can only infer the presence of this ‘invisible’ matter by observing the motions of stars which react to its gravitational mass.

"Motions of the stars tell you how much matter there is. They don't care what form the matter is, they just tell you that it's there. In the Dragonfly galaxy stars move very fast," explained Pieter van Dokkum of Yale University, co-author of a paper on the discovery published in The Astrophysical Journal Letters on Friday.

"We found many times more mass indicated by the motions of the stars, than there is mass in the stars themselves."

NASA/JPL-Caltech
Time Travel is Real: Space and Time Together Result in Universal Asymmetry
The discovery of Dragonfly 44 is important because it is the largest galaxy discovered to date that is composed almost entirely of dark matter. Scientists hope that by observing the new galaxy, they can learn more about black matter.

"It helps to have objects that are almost entirely made of dark matter so we don’t get confused by stars and all the other things that galaxies have. The only such galaxies we had to study before were tiny. This finding opens up a whole new class of massive objects that we can study," van Dokkum said.

"The race is on to find massive dark galaxies that are even closer to us than Dragonfly 44, so we can look for feeble signals that may reveal a dark matter particle."