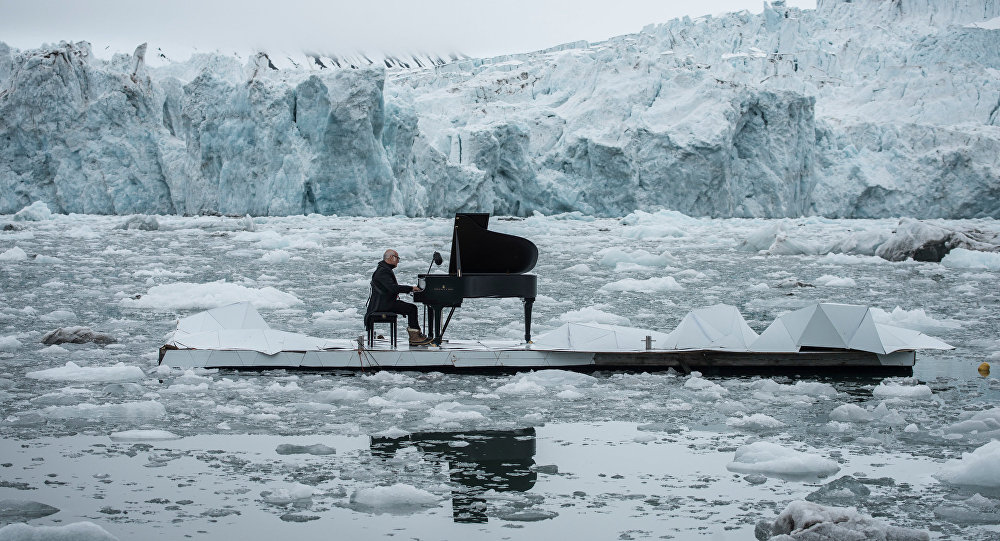 8 Million Voices and One Grand Piano Arctic Performance for Greenpeace

The Arctic is a place that is overwhelmingly cold. It's also deafeningly silent, with just the extraordinary sounds of ice breaking and crackling. Much ecological life still exists here surprisingly, but don't expect too many humans to be sitting amongst the silence playing a grand piano.

That is until now, because recently for a Greenpeace International campaign, none other than the world's most streamed classical artist and renowned Italian pianist and composer Ludovico Einaudi, performed one of his own new compositions entitled "Elegy for the Arctic" and he did so, whilst sitting on a floating platform in the middle of the Arctic Ocean.

The backdrop of the Wahlenbergbreen glacier (in Svalbard, Norway) merges beautifully with his music for what would have been one of his most challenging and truly unique performances ever. By doing so, Einaudi adds both himself and the echoes of his grand piano to one of the eight million other people from across the world demanding protection for what is one of the most unique locations on planet Earth.

​As he performed his piece of music for the first time, and in front of a magnificent surging glacier, it echoed across the ice; a truly captivating moment it is, thankfully captured beautifully on video by GreenPeace International for the world to see. It certainly has left a lasting impact worldwide with the video gaining over one million hits on Youtube since its release and several hundred thousand likes and shares.

Einaudi, 61, whose many boasts include having an unexpected younger demographic following around the world, cites, amongst others, none other than Hip Hop artist Eminem as one of his many unlikely inspirations.

For this unique concert set in the ice, Einaudi traveled as a special guest on board the Greenpeace boat 'Arctic Sunrise'. Speaking onboard, following the performance, Einaudi said:

"Being here has been a great experience. I could see the purity and fragility of this area with my own eyes and interpret a song I wrote to be played upon the best stage in the world. It is important that we understand the importance of the Arctic, stop the process of destruction and protect it."

The Arctic Ocean is the least protected sea in the world, its high seas currently have no legal safeguards. As the ice cover decreases with rising temperatures, this unique area is losing its frozen shield, leaving it exposed to reckless exploitation, destructive fishing trawlers and risky oil drilling.

The OSPAR Commission, which is the mechanism by which 15 Governments and the EU cooperate to protect the marine environment of the North-East Atlantic, has a required mandate to protect the marine environment of the northeast Atlantic, including part of the Arctic Ocean. But three countries, Norway, Denmark and Iceland, who are accused of listening more to corporate interests, are keen to stop that from happening. 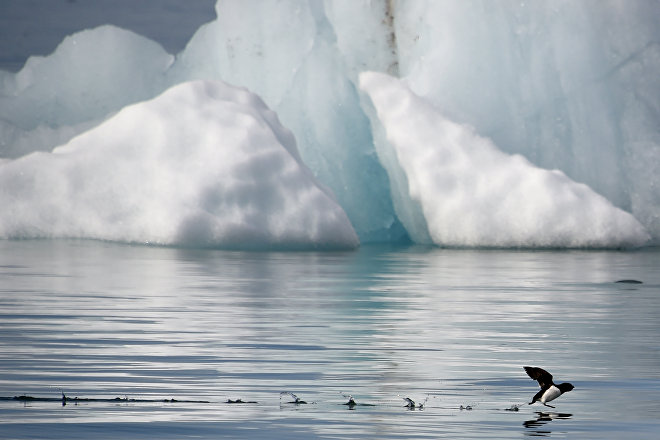 © AFP 2019 / Dominique Faget
A little auk (Alle-alle) flies near the Kronebeene glacier in the Svalbard archipelago, in the Arctic Ocean, on July 21, 2015

"Despite nearly eight million people calling for a sanctuary in the Arctic, Greenpeace Spain is very concerned that the OSPAR Commission will continue to bow to pressure from Norway, Denmark and Iceland.

"These three countries are opposed to the only Convention with the power to recognize the Arctic's environmental value by protecting a part of international Arctic waters," Greenpeace Spain arctic campaigner, Elvira Jimenez said in a statement.

International Arctic waters, increasingly accessible due to receding sea ice, are firmly in the sights of oil, fishing and transport multinationals. Scientists say that the Arctic Ocean is the leading player in one of today's greatest ecological disasters; the continuing loss of sea ice volume caused by rising temperatures.

It is said to not only puts its rich biodiversity at risk but is also having a direct impact on the rest of the planet.

The deterioration of the Arctic Ocean could also be linked to increasingly frequent extreme weather events in the Northern hemisphere, such as flooding, superstorms and droughts.

​Until views and self-interest changes, Greenpeace campaigners feel that those who are willing to risk the Arctic should not be heard over those calling to protect what the world loves and needs. Not over Ludovico's music, not over the echoes of his grand piano and the glacier, and not over the army of now 8 million strong collective voices, and counting.

A US court has banned the navy sonar blasting in vast parts of ocean! Fantastic news for whales & dolphins!🐳!
🐋🐬 pic.twitter.com/PcdqMfCiA4

​A beautifully unique manner to convey an urgent message for all around the world, and you too can raise your voices to save the Arctic.