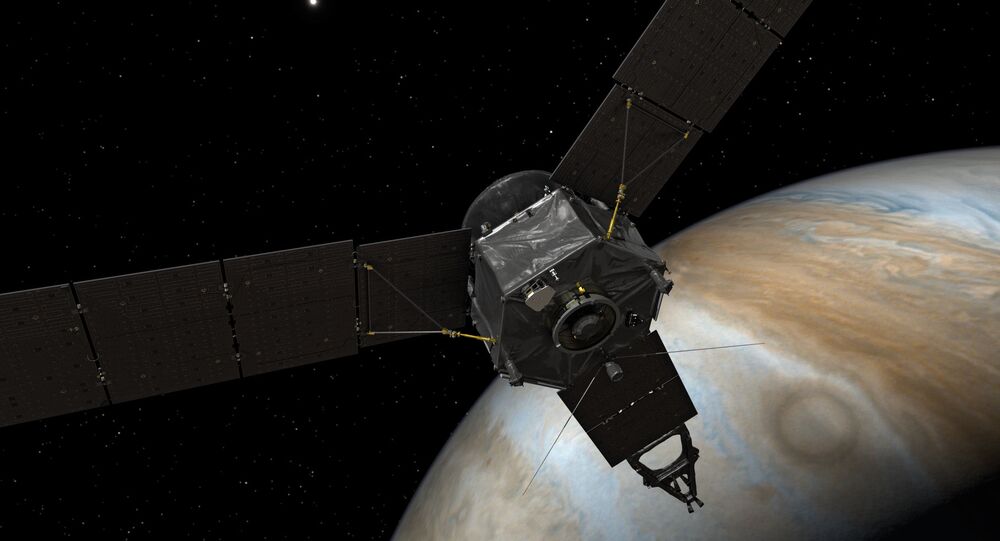 NASA's Juno spacecraft is set to enter into orbit around Jupiter, almost five years after it was launched in August 2011.

NASA/Caltech/JPL/SRI
Juno Spacecraft Approaching Jupiter to Explore Origins of Life on Earth
NASA's Juno spacecraft is set to enter into orbit around Jupiter on Monday July 4, almost five years after it was launched from Cape Canaveral in Florida.

At 8.18pm PDT, Juno will fire its main engine and begin a 35-minute engine burn that will place it into orbit around Jupiter. It will spend 20 months orbiting Jupiter 32 times, coming to within 5,000 kilometers of the planet's cloud tops.

"As Juno barrels down on Jupiter, the scientists are busy looking at the amazing approach science the spacecraft has already returned to Earth. Jupiter is spectacular from afar and will be absolutely breathtaking from close up," Scott Bolton, principal investigator of Juno, said in a NASA press release.

Juno is a spinning, solar-powered spacecraft that will take an elliptical orbit of Jupiter to avoid most of the planet's high radiation regions.

Jupiter has high energy particle belts trapped in its strong magnetic field, which are analogous to the Van Allen radiation belts around Earth but thousands of times stronger.

On June 24 the spacecraft passed into Jupiter's immense magnetic field, and its Waves instrument recorded the encounter.

Juno is also carrying a color camera called JunoCam to provide the public with the first detailed glimpse of Jupiter's poles.

#Jupiter ahead! My view of the giant planet + its 4 largest moons, as captured by JunoCam. https://t.co/EivKexPKbE pic.twitter.com/GbeC0MLUcm

​Juno's principal goal is to understand the origin and evolution of Jupiter, and also improve our understanding of the solar system's beginnings.

Its suite of science instruments will investigate whether the planet has a rocky core, map Jupiter's intense magnetic field, measure the amount of water and ammonia in the deep atmosphere, and observe the planet's auroras.