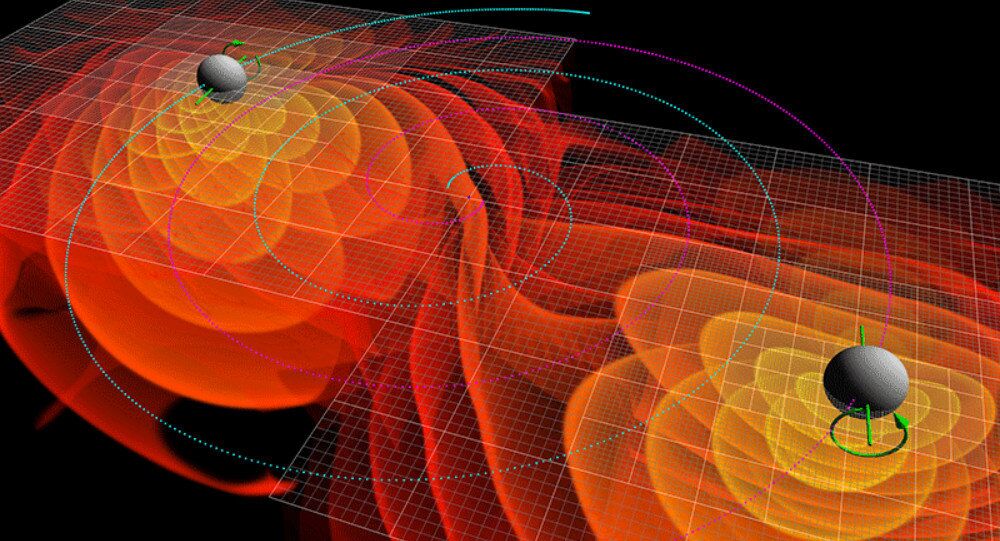 Scientists studying black holes at the observatory where gravitational waves were discovered last year have detected another wave, and predict that following the breakthrough, hundreds will be detected each year.

© AP Photo / Andrew Harnik
LIGO Scientists Record 2nd Gravitational Wave Signal in History - Moscow State University
Scientists made the breakthrough detection of gravitational waves for the first time last year, which confirmed Albert Einstein's 1915 prediction. What they saw was the result of two massive back-holes crashing into one another in the core of a dense star cluster brought together by the force of gravity, according to a new study of data from the Laser Interferometer Gravitational-Wave Observatory (LIGO) at Caltech and MIT (US).

In February scientists announced that for the first time they had observed ripples in the fabric of space-time, when LIGO's detectors picked up the gravitational waves on September 14, 2015.

They concluded that the gravitational waves were produced during the final fraction of a second of the merger of two black holes to produce a single, more massive spinning black hole.

Based on the observed signals, the scientists said the source was located in the Southern Hemisphere and estimated that the black holes for the event were about 29 and 36 times the mass of the sun, and that the event took place 1.3 billion years ago.

These two merging black holes were less massive (14 and 8 times the mass of our sun) than those observed in the first detection.

The scientists studied the signal detected on December 26, and found that again it agrees perfectly with Einstein's theory. They used 52 detailed computer models to demonstrate the interaction processes that could form a merging binary black hole system.

© Flickr / Charly W. Karl
Gravitational Waves for Dummies: Top Five Things You Need to Know
According to their model of how a dense star cluster acts as a dominant source of binary black holes, hundreds of black hole mergers could be produced over a cluster's 12-billion-year lifetime, meaning that scientists could potentially see more than 100 binary black hole mergers per year using the new technology.

"Simple physical processes make the heavy black holes go to the center of the cluster," said Frederic Rasio, one of the authors of the paper.

"By the end of the decade, we expect LIGO to detect hundreds to thousands of binary black holes."